OMINOUS rumblings of a new revolutionary movement breeding in rural Ontario, as portended in a letter to the editor of the Toronto Globe and Mail:

I am writing to you to tell you that all the children of our school are very much disappointed that Premier King has announced that the King’s Birthday will be celebrated on a Saturday.

Mr. Editor, we wish you would try to persuade Mr. King to celebrate this important holiday on a Monday or a Friday. Unless a change is made, Mr. King is doing us out of a holiday, and that is not fair.

Just use your head—you want it nice and juicy with some gravy hut not swimming around hopelessly in a sea of soup.

Let’s try it out with your head, first, Mrs. Day.

Dalhousie University, at Halifax, has a course called Economics IX, dealing with economic geography. The end of the year examinations contained this staggering question:

1 (d). What major events have been recorded in the world’s history during the past two thousand million years?

The undercover man who forwarded this communiqué says that not one of the students got farther back than Napoleon in the two hours allowed for the examination.

Item Calling For Further Details, nailed by a Kapuskasing, Ontario, operative in the Toronto Globe and Mail:

Ordinary bleach will take ink blots or writing off paper, which is worth knowing when you are treasurer for a church organization.

Unusual qualifications for a maidservant, demanded by an advertiser in the Meadow Lake, Saskatchewan, Progress:

A gentleman who toils for a Toronto advertising agency hurries up with the tale of a whimsical fellow who manages a plumbing corporation. Last Christmas he thought it would be a nice, seasonable thing to send out to his most generous customers a telegraphed greeting, instead of the customary card. Looking over the list of suitable sentiments supplied by the telegraph company, he noted with interest that: “If desired the word ‘love’ may be added to any of the above messages at no additional cost.” As a result a number of large buyers of plumbing fixtures and service were considerably surprised to receive on Christmas Eve, the following tender message, number 151 of the telegraph company listings:

We Take Pride in Numbering You Among Our Valued Customers and We Hope to Merit Your Continued Confidence Love Interplanetary Plumbing and Sanitary Engineering Company, Limited.

For the past eighteen months, Michael B. Moore has been a patient in Fort Sanatorium, Saskatchewan. Shortly after he went there, his father, Dr. Franklin G. Moore, climbed into bed in Regina to take care of a thrombosis. A little thing like a thrombosis didn’t affect Dr. Moore’s sense of whimsy. He is Hibernian enough to be known as the “Duke of Blarney.”

Around Christmas time, son Michael wrote his dad and suggested discreetly that a small loan would not come amiss. A few days later he received a registered letter from the post office at Regina. Inside was a folded dollar bill tied by a piece of string to a label. And a note. The note was from Postmaster Leo LaBelle, and it said: “You might advise sender that this is a very dangerous way to send money, or if you advise me of his name I will get in touch with him.”

The label tied to the dollar bill bore cancelled stamps and Michael’s address on one side, and on the other side the inscription, “That Famous ‘Touch’ from the ‘Duke of Blarney.’ ” It had been mailed that way.

Once again is demonstrated the efficiency of the Canadian Postal Service, not to mention the honesty of the several people through whose hands that naked dollar bill passed. And not to mention the twinkle in the eye of the Duke of Blarney.

Advertisement for a Kentville, N.S., store.

These blankets were used twice by Admiral Byrd’s expedition to the South Pole, and the last three Mount Everest expeditions depended upon them.

Still no holes in them?

And, folks, we can’t live on politicians’ promises. Send in your subscription. The wolf at our door is developing dandruff—and what a mess !

Startling display of supernatural power evidenced in a notice of Sunday service of the Biblical Research Society, of Toronto.

Note change of Day and Place.

One of our fair sex correspondents, living in Prince Albert. Saskatchewan, vouches for the truth of this story about a very new recruit to the forces of the Royal Canadian Mounted Police. The young man, in his new uniform and very proud of it. took his girl friend for a walk in the country. Displaying his equipment, he showed the lady his nice shiny handcuffs, flow do they work? asked she, greatly interested. Put your arms around this telegraph pole, he suggested, and I’ll show you. Eager for the demonstration, the lady embraced the pole, and the policeman locked her wrists with the cuffs. See. like that, he said, surveying his work approvingly. Then, horror and anguish contorted his features, as, after a frenzied search, he realized that he had left the key at home. 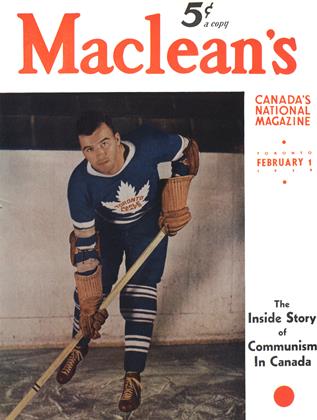