THE London Star prepared this diagram to give its readers an idea, by comparison, of the effort in which the government and people of Great Britain are involved.

"To be enlightened is not to be dismayed. Gigantic as the effort is, we can face it, and we are ready and determined to face it. This is the price of liberty, and we are prepared, if necessary, to pay the price. We may lament that we and the peoples of other countries are involved in this sacrifice to Moloch. We are ready and willing to retrace our steps, but while the Dictators call the tune we will answer them. A free people can do all this and more to remain free.”

Since those words were penned, Hitler has provided further enlightenment as to the necessity of such preparations.

Moreover, the British people have been enlightened as to the inadequacy of their defenses at the time of the crisis of September, 1938. In this issue of Maclean's there is an article by Captain Liddell Hart, military correspondent of the London Times, which deals frankly with the errors of that period. And various British newspapers and periodicals have not minced words in revealing the failure of the Government’s National Service campaign to achieve the results hoped for.

Instead of hotly defending its defense measures, the Government has candidly admitted the shortcomings and gone about the business of rectifying them.

Today, one tenth of the whole working population of Britain is either in the fighting services or engaged in armament production.

Britain is vastly stronger than she was at the time of the Munich Conference. And that strength is due to self-examination of her weaknesses.

As the Star says, "To be enlightened is not to be dismayed.”

A DULL, grey smudge on the rim of the sea. Till the sun breaks forth and the gales run free

And the blithe waves don their hoods of cream! Then out of a grey world all a-dream Rises a full-armed argosy.

And under the hatches treasure fair.

Is it jade, or porcelains old and rare,

Is it camphire, rubies, or broidered goods, African ivory, satin-woods?

What does the frowning galleon bear?

Bought by the blood of our gallant sires;

Freedom to live, to speak, to pray;

These the wares in the galleon grey Steering into the sunset fires.

And the guardian of it all for me,

The living symbol of liberty,

Is a quiet Englishman, sailor-bred,

Who stands well forward, looking ahead Over the dancing, friendly sea.

We Were Fooled/ But—

IN OUR last issue there appeared an editorial headed "Clearing Skies.” It expressed the belief that there was reason for confidence concerning the international and domestic outlook for the remaining months of 1939.

That editorial was written on March 9.

On March 15, Hitler took what was left of Czecho-Slovakia. For two days there was no move by the governments of Britain, France, Russia and the United States. Then the storm broke.

What will happen between the date of this writing and the appearance of this issue we do not know. And we aren’t going to bank on any opinions.

At the same time it seems to us that if the people of the North American continent continue to be scared away from business effort, no matter what turmoil we may be in, they will be doing exactly what Europe’s trouble-makers hope for.

During the last war, the slogan of the Empire’s industries was "Business as Usual.” Business couldn’t be usual, but it was the right spirit.

The same spirit can be helpful today.

NOW THAT spring is here, should you be tempted to make up for months of cautious driving on icy roads by “stepping on it,” you might remember these things.

In the United States last year, 32,000 persons were killed and more than a million injured in automobile accidents.

Canadian casualty totals for 1938 are not yet available. Estimates based on returns from several provinces indicate that between 1,200 and 1,400 persons were killed and more than 22,000 injured.

In both countries there was a reduction from the terrible toll of 1937, the blackest year in history.

But the record is bad enough to permit of no letup in corrective measures.

In the United States (and the ratio for Canada is about the same) 84 per cent of the fatal motor accidents occurred in clear weather, and 77 per cent happened on dry roads.

Think of speed in danger units.

Increase in car energy outstrips by far the additions in miles per hour.

If you hit a wall at 50 miles an hour, the impact is the same as if you fell eight stories.

In the old days your car talked. It rattled and shook when you reached the dangerous energy unit.

Your new car doesn’t. It is mechanically perfect.

You, the driver, are not mechanically perfect. By the pressure of your foot you can release more energy than you can control. It may be murderous or suicidal energy.

Keep that in mind.

And don’t plaster your windshield or rear window with stickers, either. 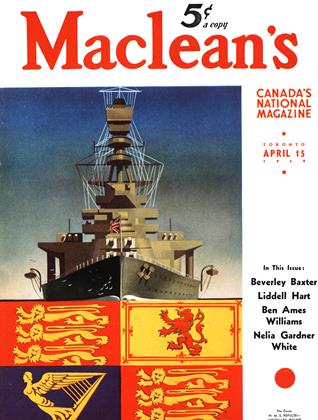