CANADA’S earliest history began in ancient Nova Scotia—first known as Acadia—for in 1497 John Cabot sailed into Cape Breton's inland sea, Bras d’Or, and landed on Cape Breton Island, where he erected the Royal Flag of Great Britain. Cabot did not remain, and no settlement was made in the province until 1604.

A province such as Nova Scotia, which is one of the main ancient gateways of Canada must invariably have a history crowded with fascinating incident, with stirring tales of ardors and endurances. The name Nova Scotia is significant. Latin was still the language of scholars when the scholar king, James VI of Scotland and I of England, gave in 1621 to his loyal and adventuresome subject. Sir William Alexander, the lands lying between Newfoundland and New England, “to be holden of us for our Kingdom of Scotland as a part thereof.”

To Nova Scotia’s wharves come ships flying the flags of many nations. Not infrequently these flags are ensigns of Scandinavia, which recalls to the historically minded that Norse seamen found Nova Scotia, long, long before the time of Columbus. They called it Markland, and a community in the province perpetuates the name.

In Edinburgh, Old Scotland’s capital, conversely, there is to this day a plot of ground that is Nova Scotia, and which in the words of the Gilbert and Sullivan song, might be called “a paradox, a paradox, a most ingenious paradox.” Charles I in 1625 put the scheme into operation whereby, for the preserving and governance of Nova Scotia, the noble lords must be given their titles on Nova Scotian soil. It was too much to expect the king and baronets-elect to

sail across to Canada for the ceremony, so a plot of ground within the precincts of Holyrood Palace was decreed to be part of Nova Scotia. It is even said that a basket of earth was brought from Canada to put the finishing touches to the legalizing of the ground as Canadian. The idea, of course, was to induce the men so honored to take a practical interest in Nova Scotia, to invest capital in it. and to send out men and goods. This strange decree has never been rescinded.

His Majesty James I. at whose command the King James version of the Bible was prepared, was not forgetful of the spiritual requirements of the Nova Scotians. It was very important that those who, as the original charter has it. "inhabit the said Province of Nova Scotia or its border, may live in the fear of Almighty God and at the same time in His true worship, and may have an earnest purpose to establish the Christian religion therein, and also to cultivate peace and quiet with the native inhabitants and savage aborigines of these parts, so that they and any others trading there may safely, pleasantly and quietly hold what they have got with great labour and peril.”

As France and Britain strove for New World supremacy, ownership of Nova Scotia shifted from one to the other, and it was not until 1759, when Wolfe died victorious on the Plains of Abraham, that Nova Scotia became permanently British.

'Fhe province as we know it today is much smaller than that New Scotland that King James gave to the care of Alexander; for at the beginning, as may be gathered from the terms of the charter quoted, were included also the territories now known as New Brunswick and Prince Edward Island. 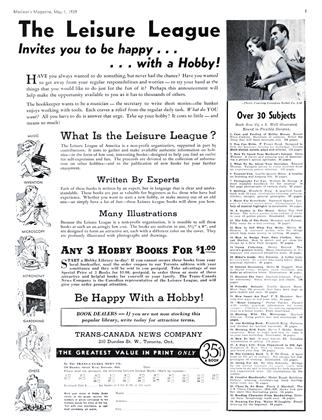