HOW SHOULD Canadians welcome their King? Should they treat him as an idol before which other men bow down; indulge in snobbery, mummery, absurd incantations? Or should they give him a welcome warm, yet rational; a tribute of respect and reverence without the insult of flattery? The answer to these questions is important. It will tell the measure of our understanding of the true character of the Monarchy. Tell the measure of our capacity for democracy; of our fitness for citizenship in an Empire.

Two years ago the world witnessed an extraordinary spectacle. The spectacle of men journeying to the Coronation of a King from one fourth of the earth’s surface; representing more than one quarter of the world’s population; coming from every hemisphere and all the world’s continents: representing every race and creed on earth; representing, under one flag, over 400 languages and dialects. They journeyed to pay homage, not to a man, nor to a King, nor to an Emperor, but to an institution: The strangest, greatest, mightiest secular institution that history has known.

It may be well if, in these days, when Canada’s King comes home, reflect well on these things. On their deeper significance.

The Crown symbolizes the Empire. Symbolizes its unity. But the word “Empire” has too often connoted a thing sinister. It conjures up images of vast possessions; of military conquests; of battle fleets and armies; of numbers left on the field. Too many of us, when we think of the British Empire, think of Trafalgar and Waterloo, of Nelson and Wellington—think of it in the spirit of Webster’s famous passage—

“A power which has dotted the earth’s surface with her possessions and military posts, whose morning drumbeat, following the sun and keeping company with the hours, circles the earth with an unbroken strain of the martial airs of England.”

bution of the British race to human thought and dignity; a reverence found in Britain’s cradling of free government— in the political, moral and spiritual concepts she has given to the world.

What they mean for the world is told by the story of these times. Throughout most of the earth today, the lamps of democracy are going out. We are told by a new philosophy that the force of right must give way to the right of force; that man is incapable of rising to a higher dignity; that he is incapable of governing himself—must live by a dictated choice.

Some among us, in recent years, seemed to subscribe to that doctrine. They told us that we needed a dictator; somebody who would hack his way through the old parliamentary checks and balances, to efficiency and economic security.

They are not so sure today. They are not so sure today because they have seen that this business of hacking through parliamentary checks and balances means hacking through human lives and values through those things which some of us think of as the most precious in human existence. In dictatorship lands today there is no economic security; and when we see what has come, instead, to millions, with its reign of bestiality and tragedy, the old British institutions take on a warmer glow.

It is the Crown which is the headship and symbol of those institutions that Canadians should reverence. The Crown and Empire which believes in freedom, in human personality and dignity, in human diversitydiversity of races, of creeds, of ancient faiths and loyalties.

Pericles said he loved Athens "because of its physical beauty and its traditions of justice, liberty, intelligence, and culture.” This visit of Canada’s King and Queen can call forth proof that Canadians love the British Crowm for the same reasons. Proof that we love what the Crown symbolizes for the great names that British history has placed on the scroll of freedom. Proof that we love the British Empire because

it stands today not as something to dominate or overawe the world, but as an Empire that loves mercy, and walks justly, and strives for peace on earth.

Proof of these things will not be given by mummery or snobbery. It will not be given by superstitions about the “magic of Monarchy.” It will be given only by sober manifestation that we comprehend the meaning of the British Empire; by searching thought of whether in these days, with their mighty changes and upheavals, with their rise of strange ideologies and philosophies, we want to keep such an Empire; by reflection upon what civilization might be today, what its dread promise would be for the future, if that Empire went down. For reflection should bring the truth. The truth that in a world of unrest, in a veritable sea of hate and racial and religious bigotry, the British Empire stands as a beacon of hope —the one light in a storm-beaten sky.

Forty years ago, in his great rectorial address to Glasgow University, Lord Rosebery spoke of the glories of the British Monarchy and Empire, and he asked:

“Shall we not. w-hile we adore the blessing, acknowledge the responsibility?”

And Rosebery went on to pray—

“That strength may be given us. adequate and abundant, to shrink from no sacrifice in the fulfillment of our mission; that we may be true to the high traditions of our forefathers; and that we may transmit their bequest to our children, aye, and please God. to their remote descendants, enriched and undefiled, this blessed and splendid dominion.”

That spirit, let us hope, will be the spirit of Canada’s welcome to George the Sixth.

The Crown and Canadian Unity

WHAT else? This: That this homecoming of Canada's King may be the birth of a new impulse for Canadian

unity. Seventy-two yéars have gone since Victoria proclaimed Ottawa as the capital of a new British Dominion- the Dominion of Canada. That act brought peace, unity. It lifted four uncombined provinces of scattered and diverse creeds and races into a federation with one common aspiration. There was in it the flavor of a heroic age. From the sea to the mountains, from the rivers of the North to the rivers of the South, men had formed a new nation of free people. In the long future ahead they would nurture that freedom, develop and use their common resources, preserve their memories and milestones.

What of those hopes today?

Seventy-two years have fulfilled them —in part. Power has multiplied, w-ealth increased, responsibility expanded. Canadian cities rank among the great cities of the continent; Canadian trade embraces the earth; Canadian wheat feeds much of Europe. The land has been girdled with rails; a Canadian company has realized the dream of the old explorers. To the first four, five more provinces have been added, all greater than at Confederation. Great factories today smoke throughout the land. Schools and churches and hospitals are everywhere. Canals have been dug; great harbors throng with commerce; sea and mine and forest yield great riches; mighty water powers have been developed for gain.

Politically, too. the march has been forward. Canada, from being a Dominien limited in external and internal power, has become a sovereign nation, controlling her own destiny. Through seven decades she has advanced to a point where her right and power to deal with all her foreign interests are no longer questioned. Today Canada nominates her own GovernorGeneral; appoints her own ministers to foreign capitals; negotiates her own treaties. Those rights, developed under the British Crown, christened in the blood of the Great War. crown the constitutional growth of seventy-two years. From selfgovernment in domestic matters under sharp limitations, to complete self-mastery; from a state of nonexistence in world

affairs to full rights of participation in world politics; from submission to external executive authority to the position where the final power is the King advised by his Canadian ministers; from a colony to a nation - such is the story of three generations.

There is unity. Unity, with all thought and heart, in the British Commonwealth. Unity of diverse creeds and races. Unity of our provinces. May it not be that in this coming to Canada of Canada’s King, realization will come to us of a common bond, a common rallying point. Of something around which all of us can rally in a common aspiration, a common ideal, a common bond of union? In a common British citizenship?

With these thoughts—and hopes—and not with empty manifestations of pomp and ceremony, much less with absurd snobberies and incantations, let us greet our King.

Their Majesties are coming to this land to see their Canadian people; to see a great part of the British Commonwealth; to see how Canadians live. They are not coming to see frills and fawning, bowing and bending.

Let us honor an august and historic tradition. Let us venerate the emblem that has stood for constitutional liberty through turbulent years—which has stood for our royal freedom from hysteria, beastliness, political murder, oppression I and hate.

But let us avoid cheap exaggerations, hysteria and magic.

I^t us honor the head of our Empire and State; in so doing we will be honoring ourselves and expressing our affection for the Empire we belong to. But let us avoid superstition; let us not substitute worship for respect; not substitute blind, sycophantic. personal homage for rational acceptance and reverence of a mighty symbol of free government.

In a word, let us give to Their Majesties a welcome warm, ardent and sensible— give them the tribute of a people who * believe that the Monarchy best suits their traditions and preserves their liberties.

Lastly, let us try to show them that our loyalty to what the Crown symbolizes is not lip loyalty alone; that it is a living thing: a loyalty that takes thought of the best things and traditions in British history: thought of freedom, thought of justice and mercy, thought of compassion and pity.’thought of the well-being of the common man.

It will be by what we show of these things, not by flag-waving and similar demonstrations, that Their Majesties will judge us. 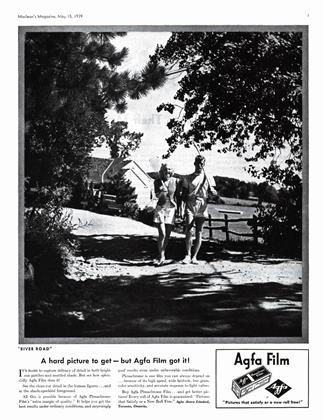