WHEN Jacques Cartier was sailing up the St. Lawrence on a golden summer day over 400 years ago, he asked his Indian pilot the name of the great river, and was told that it was known as “the river that has no end.” Certain it is that while this mighty river may have an end, the end is a long way from its headwaters. It was on the 10th of August that Cartier asked the Indian the name of the river, and the explorer decided to call it after the great saint who on that day, hundreds of years ago, had suffered martyrdom rather than deny his faith. St. Lawrence would have approved of having his name applied to what he might have termed a “healing stream,” for his enemies burned him to death.

St. Lawrence was a Spaniard by birth, and legend has it that he was one of the victims persecuted by the Roman emperor Valerian, being summoned before the praetor as a Christian. When called upon to deliver up the treasures of the church, he produced the poor and the sick who were his special charge. He persisted in the claim that these were the true treasures of the church, and in consequence he died a martyr’s death.

The river which bears his name holds a high place among the great rivers of the world, such as the Mississippi, the Rhine and the Volga. Its past is rich and colorful, its present a blending of the works of nature and of man, and its future rich in potentialities. Over its waters each year move nearly one hundred million tons of ore, coal and grain, but nevertheless it

still remains “a creature of nature rather than a slave of man,” providing a wide and glamorous pathway through a great country, an outlet for those seeking adventure in far lands.

The old voyageurs were the first who intimately knew and loved the St. Lawrence, and gave it its rich and unforgotten traditions. As they fought their way up the river in their canoes, they sang:

Progress demanded barges in place of canoes, barges gave way to Durham boats, and these in turn to steamers. But while the story of advancement through the years is an amazing one of deepening canals, power development and tremendous traffic, yet a great part of the river and of the land upon its borders has changed little, and is still romantically beautiful. The St. Lawrence knows well the grip of winter, the exultant blossoming of spring, the glory of summer, and the beauty of autumn coloring. Although the river has been somewhat subdued to the service of mankind, it has by no means lost its individual character of resistless power.

Unlike the Ganges and the Yangtze, the St. Lawrence is a beneficent river. The power which it generates has created cities and has made the life of lesser places more pleasant and more productive. Majestic and beautiful, even in chains, Canada’s old river of the North just keeps rolling along. 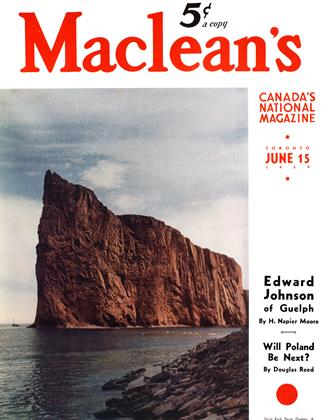