OUR splendid Canadian youth has just passed through its annual ordeal of trial and tribulation. From the shores of Nova Scotia to the mountains of British Columbia, hundreds of thousands of boys and girls have wrestled mightily, and with varying degrees of success, with school examination papers. Some of the results have been gratify ing, others have spelled disaster;

but there are reports which show a resourcefulness, even in the face of defeat, which should make us proud of these brave young Canadians. For example, there were two students in different classes in a Consolidated School in King’s County, N.B. One was asked to quote a verse from Kipling’s “Recessional.” He scourged his laggard memory with whips, but in vain. Perspiration bedewed his furrowed brow as the dock ticked on, and at last he wrote on the paper in front of him:

The Lord of Hosts was with me not;

The second lad was floored by a general knowledge problem. He was asked to imagine a ship leaving Southampton, England, for Australia. What cargo would she carry, through what waters would she pass, and on the return trip, what cargo would she take to England? Completely baffled but with head still unbowed, the bright boy turned in a paper containing one three-word sentence:

In the custody of minds so ingenious as this we feel that the future of our great Dominion is safely guarded.

This department has been sharply brought to book by Mr. Arthur F. Stabler, of Loon Lake, Sask., for stating in the May first Parade that “the first railway line, built between Liverpool and Manchester in England, opened in 1830.” Mr. Stabler denies this, and sets forth a doubtless unassailable claim that “the first public railway was opened between Darlington and Stockton (in England) September 27, 1825. Mr. Stabler, a native Darlingtonian, says he was impelled to take up the cudgels on the part of the town of his birth. Quite right, too.

Our only defense—probably a pretty feeble one—is that the erroneous statement was contained in the book we were discussing, the remarkable “Treatise on Railway Economy” written by an American named Dionysius Lardner, and published in 1850. The original mistake, then, was Author Lardner’s, not ours; but since we did not make it plain that we were quoting the Lardner “Treatise” on that particular point, there is nothing we can say further except that Parade makes no claim on its own account to be an authority on railway history, or anything else. Heaven forfend '

Civic departments seem to have been having a particularly sticky time of it lately, in widely separated parts of this vast Dominion. Vancouver. B.C., and Truro, N.S.. for instance. Of the two, Vancouver seems to have put on the bigger show, but we like the homey bucolic flavor of tiie Truro incident, too. In Vancouver an excited voice telephoned police headquarters and yelled, “There’s an airplane crash at Renfrew Street and Thirteenth Avenue.” The whole city swung into action, giving'all. Short-wave radio called all cars. Detectives hurried from routine jobs of detecting to probe the airplane crash mystery. The fire department turned out engines, hose wagons and miscel-

laneous equipment including the inhalator squad, complete with oxygen tanks. Two hospital ambulances, with sirens shrieking, roared through the streets. Dr. J. D. Whitbread, the city coroner, leaped into his car and dashed to the scene. At Renfrew Street and Thirteenth Avenue all was confusion. Police and firemen and ambulance and inhalator crews milled around among hundreds of excited spectators. “Where’s this airplane crash?” demanded Coroner Wrhitbread. They showed him the wreck—of an eighteeninch model plane devised of balsa wood and paper, with a rubber-band motor.

Down east in Truro, somebody rang in an alarm from a call box. The engines and apparatus rushed to the scene, volunteer firemen hurried into their oilskins and ran to join their companies. At Prince and Commercial Streets, smoke poured from the rear of Snooks’ Provision Store. The brave fire laddies broke out their axes and ran up ladders. Suddenly Mr. Snooks, Junior, appeared. “Go on home,” he said, a trifle acridly. “There’s nothing wrong. We’re smoking hams.”

Monkey business with vital statistics in Manitoba as exposed by the Birthday Congratulations Department of the Winnipeg Tribune:

They held the Western Nova Scotia musical festival at Yarmouth, N.S., a few weeks ago. The talented Ifan Williams, of Halifax, served as adjudicator, passing on many delicate harmonic problems involved in judging such melodic intricacies as piano solos, contralto solos, soprano solos, mezzo-soprano solos, rhythm bands, Sundayschool choruses and church choirs. Not an easy task. Inevitably there were disappointments, and it may or may not have been sheer coincidence that the issue of the Yarmouth Telegram carrying the story of the final concert of the festival, also printed on an inside page, this advertisement:

There is a distinctly inspirational flavor about the rejxirt from Ponoka, Alta., concerning a green farm hand of that place who, faced with a difficult problem involving a stubborn piece of livestock, solved it in his own fashion to the satisfaction of one and all. The young man rode his horse bareback to another farm two miles away. He was to bring back a recently purchased milch cow. Starting on the return journey, he noosed a rope around the cow’s neck, tied the other end to his belt, mounted his horse and said, “Giddyap!” The horse started to canter. The cow braced her front feet and held her ground. The farmer fell off. biting the dust. Twice more he made an attempt to persuade a little sweet reasonableness from the cow, but to no avail. So he dismounted, hooked his horse’s bridle into his belt, climbed on the cow’s back, and. leading the horse, proceeded to drive the cow to its destination without further delay. 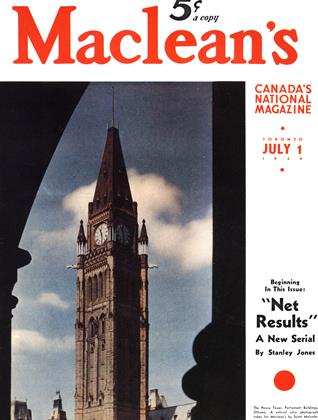