WEDNESDAY is Early Closing Day in Brantford, Ont. All the retail establishments shut up shop at noon, and Brantford housewives who haven’t got their food supplies into the pantry by that hour are called upon to do a lot of delicate explaining to hungry and supperless husbands before they go to a restaurant to eat. This circumstance points up the ready wit of a golf-playing Brantford matron who found herself out on the fairways far from the club house at a recent Wednesday nooning, faced with the fact Lhat within a few minutes all hope of purchasing her urgently needed groceries would vanish. Frantically searching for a way out of her dilemma, she caught sight of a telephone lineman, working at the top of a pole near by. She ran over and shouted explanations to the trouble-shooter through her cupped hands. The obliging chap hooked up his working set, put through a call to the harassed lady’s provision merchant. The homemaker finished her round, then returned, content, to her domicile. The groceries were waiting for her on the back porch.

A praiseworthy effort to establish a golf club at Qu’ Appelle, Sask., came very close to being entirely wrecked when the ladies of the embryo organization got hold of a copy of the regulations drawn by the lordly men. The clause dealing with fees named them as, “$1.50 for adults, and $1.00 for ladies and students.”

In a world sore beset by melancholy events tending to burden human minds with gloomy forebodings, we are vastly comforted by the report of a Montreal operative recording it as an established fact that lost books sometimes do return to their rightful owners. The evidence concerns (a) Dr. H. M. Tory, famed educator and former President of the National Research Council at Ottawa; and (b) Mr. Will (Bill) Gentleman, general factotum and janitor extraordinary at McGill University, who has been an eminent figure in the bright college years of McGill students ever since before “Shag” Shaughnessy’s football teams were winning Intercollegiate titles with the aid of Billy Billington’s educated toe, if you can remember that far back.

Around the beginning of the century Dr. Tory was a professor of mathematics at McGill. One Sunday afternoon (1905. or thereabouts) the good Doctor attended a meeting in one of the university buildings, taking with him a prized Bible which bore his name in gold letters on the limp leather cover. Leaving the meeting at its close. Dr. Tory forgot his Bible. Years later Bill Gentleman was cleaning out cupboards and came across the Good Book, still hearing the inscription, “H. M. Tory',” in faded gilt. Mr. Gentleman laid the Book away, promising himself that he would return it to Dr. Tory at the first opportunity. During the last week of May the League of Nations Society in Canada held a conference in McGill’s Arts Building. Dr. Tory was a delegate, and there Bill Gentleman restored to him his Bible—lost over thirty years ago.

The moral seems to he : If you must lose books, lose them some place where Bill Gentleman will pick them up.

Machine Age influence on the Prairies, as evidenced by the Tofield, Alta., Mercury’s handling of a local news item.

Dr. Lyall of C.N.R. was at Tofield last week checking the steam pressure, ignition system and brakes of all railroad employees here. It was a routine physical examination.

Ely, Nev. (U.P.)—Mountain lions as food are highly recommended by Mr. and Mrs.

Otto Neilson and Mr. out a couple of young ones. The lion and Mrs. Ralph Kauffman who tried tenderloin, they reported, tasted a little like pork and quite a bit like chicken.

This department has been in a dither for days and days, trying to sort out the hundreds of communiqués received from operatives who concentrated their efforts on incidents connected with the Royal tour. It has been an arduous task, and perhaps we have fallen short of perfection in its accomplishment. Scores of typographical errors came in, not all of them very funny. There was considerable duplication. The first edition, offered here, deals perforce only with the odd little happenings between Quebec and Vancouver. We hope to get around to the west-east half of the journey by next issue.

At Montreal the staid and authoritative Gazette reported that, “Forty-three veterans from Ste. Anne’s Hospital who had given their all to the Empire more than a century ago gathered ...” Which seems improbable.

Also at Montreal, a radio announcer cried out that “the uniform of the Hussars, as you know, consists of a fur busby.”

During the Ottawa visit a small boy named Timmy was treated by St. John Ambulance workers for a severe tear in the seat of his pants, which got ripped as he climbed a pole. The first-aid experts patched up Timmy’s rear end with surgical adhesive tape.

The liberal-minded Ottawa Citizen, praising the conduct of the crowds, observed that many hungry people were “munching away on their feet.” Probably a slight exaggeration.

They seem to have had an epidemic of punctuation trouble in the plant of the Moose Jaw, Sask., TimesHerald. That newspaper, in the same issue, carried an advertisement entirely devoid of stops or commas, warning the anxious populace: “Don’t Buy a Periscope Unless You Want to See the King and Queen on Sale at All News v Stands,” and an item reporting that Queen Elizabeth “wore a short jacket frock of powder blue lace, the hem edged with net and grey suede shoes.”

A Climax, Sask.. wag gave a restaurant waitress a silver souvenir medallion in payment for a meal. The young lady accepted the token in good faith returned change for fifty cents. The joker explained his prank, laughing heartily. Next day the same merry-andrew tendered an honest-togoodness silver dollar of the commemorative issue to the same waitress, who scorned the coin, and told him to take his phony money some place else.

Cee-Seven veterans ordered for the King’s Guard at Vancouver, were advised by the usually trustworthy Sun that, “Dress will be red berets and medals.”

And the Vancouver NewsHerald, reporting on the eating habits of the Royal party, commented that the chef “was glad when the guests had came back down the dumbwaiter.”

That’s all for now.

How were their batteries? 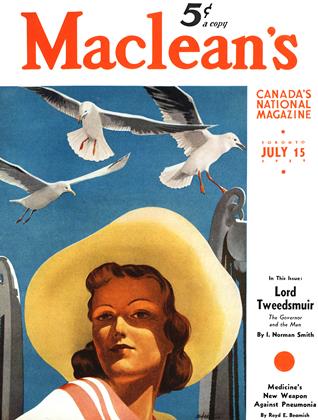