There's Something in a Name MARY AGNES PEASE August 15 1939

Click to View Article Pages
There's Something in a Name

WHEN Canada was New France, the vast rich Province of Ontario, which today has the largest population of any province in Canada, was virgin wilderness. At that time, which is little more than 250 years ago, settlement by the white man had not been made very far beyond Quebec and Montreal. The Iroquois and Algonquins with their tribal branches were the sole inhabitants of Ontario, and, as was natural, they were not hospitably disposed to the idea of settlement as suggested by the French explorers. The Indians were content with their lot; they occupied themselves with hunting and fishing, and, as a means of diversion, indulged in an occasional war with one another. They named the great lake over which they glided in their canoes “Kanadario,” which means beautiful, or sparkling, water. This musical and

appropriate name iost a bit of its cadence when it was shortened by succeeding inhabitants to “Ontario,” but the meaning of the word still obtains, and it is not surprising that the white man later applied it to the whole of the large province, since every part of it—from Ottawa, the Dominion capital, to the world-renowned Niagara Falls, the many water routes, the wonderful farming and fruit lands, the gleaming output of mines, the thriving towns and cities—suggests sparkle and beauty.

After the British conquest and the Peace of Paris in 1763. Ontario was known as Upper Canada. By deliberate design, the province was set apart as a community for English-speaking settlers. Here came men from the British Isles with little resource beyond their own strength, determination and intelligence, who carved their little farms from the “forest primeval” and established small settlements. Later some thousands of refugee Loyalists arrived from the United States and laid the foundations of “the first effective settlement” and of representative government in Upper Canada. Many of these Loyalists were disbanded soldiers, and the Government very wisely made arrangements to have those who belonged to the same regiments placed together in townships. The names of these townships in most cases suggest the parts of the Old Land where the settlers were born— Norwich, Cornwall, etc. It was of great advantage to Canada that the soldier settlers were placed near together, for during the War of 1812 they were able to mobilize without delay for further British service. They and their descendants have remained in loyal attachment to British connection, an aid in withstanding foreign invasion and in suppressing rebellion.

The fact that Indian names abound in Ontario (there are over (XX) of them) brings to mind the distinguished Mohawk chief, Joseph Brant (Thayendanagea), who, with members of his tribe, fought on the British side during the American

Revolutionary War and was among the Loyalists who came to Ontario. A grant of 7CX),000 acres along the Grand River was made to Brant and his people in their own country. Brant County and Brantford perpetuate the name of this great warrior who was buried in the shadow of the little Mohawk Church near Brantford, which was given by George III to the Indians.

The story of the separation of the two Canadas into Upper and Lower, of their later union for political and economicreasons. and of their final division again as the separate provinces of Ontario and Quebec (but as integral parts of the Dominion of Canada under Confederation) is a fascinating one. The story of Ontario itself has all the qualities of unusual drama —its theme, the development of a great province; its action carried by a cast of heroic players against a romantic background with the usual accompaniments of love and hate, courage and cowardice, good and evil, contests and victories. The name of this drama would naturally be Kanadario—beautiful—and its performance would go on and on. 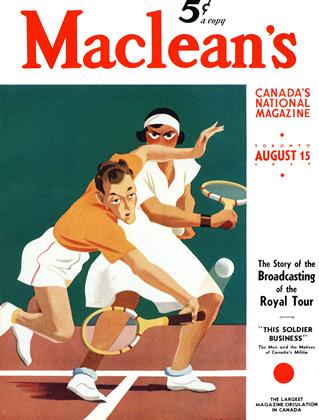