ON JANUARY 25, the Dominion Parliament will again be in session.

The Government will give an accounting of its war activities to date, and from recent speeches by Doctor Manion and others it is evident that the Opposition will not be deterred from vigorous criticism where criticism is felt to be due.

It is reported from Ottawa that the Prime Minister has given no indication that any attempt will be made to smother candid comment in the House. There are, however, certain cabinet ministers and a number of departmental officials who bitterly resent criticism. Some of them have been heard saying that it should not be tolerated; that criticism in wartime is sabotage; that publications which criticize the results, or lack of results, from the oft-stressed midnight burning of the capital’s electricity, should be suppressed by the censor; that those who expose incompetence are traitors who should be purged without delay.

There were mutterings of this sort against Maclean's and The Financial Post when these publications revealed evidence of the methods of contract-letting employed by the Department of Defense under Ian Mackenzie, and mutterings against other publications too.

In time of war, the Government of even a democracy must assume a certain amount of dictatorial power. But the fundamentals of democracy remain.

In Canada, a wartime government still acts for the people. If it does not, it goes out.

The people have the right, in fact the duty, to check up and be assured that the Government is acting wisely, and in a way that truly represents their views.

The intricacies of government make it impossible for even a small fraction of the people by their own efforts to find out just what the Government is doing. Their interests, however, are definitely concerned. They look to their parliamentary representatives and to the press to check up and tell them what kind of service they are getting for the taxes they pay.

Constructive criticism should be welcomed by all Government departments. Evidence of incompetence, lethargy, carelessness, stupidity, favoritism, fraud or grave suspicion of fraud will, of course, be resented by those who are involved. But the press and Members of Farliament have a duty to the public and to themselves —to expose inefficiency or wrongdoing wherever they find it-

When a business concern is hit by a drac'.ic

depression or by adverse conditions, does it dispense with its audit department? Does it say that all time and thought must be put on sales and all check on expenses, investments, agreements, etc., must be abandoned? It does not. The well-managed concern feels that as conditions become more difficult it must conserve its resources, increase its efficiency, and eliminate waste or unproductive expense in every form.

TDEC.ENTLY, there appeared in the Winnipeg

'-Free Press, a Liberal newspaper, a series of articles on “Political Controversy in the Last War.” Written by Grant Dexter, they are worth study by a larger audience than one newspaper can reach.

Mr. Dexter recalls that at the special war session on August 19, 1914, Sir Wilfrid Laurier, leader of the Opposition, announced a political truce in words “which glowed with emotion and concern.”

At that time, the LiberaI Monthly was under the editorship of Mr. Mackenzie King. Mr. Dexter says, “Mr. King had a ringside seat in 1914, and undoubtedly remembers vividly how steep and sudden was the descent from the mountain crest of idealism to the pit of embittered partisanship.”

In October, 1914, the Liberals claimed that the Conservatives had broken the truce within a week of the outbreak of war.

In December, 1914, the London Times published an article headed “Boots and Politics,” describing the wretched footwear with which the first contingent was equipped. The Liberals at once demanded an investigation. Laurier, however, still desired a political truce, but when Parliament met in February, 1915, he stated in the house that war expenditures must be carefully scrutinized, and told Sir Robert Borden that he (Laurier) knew that fraud had been committed and that the credit of the country was involved.

“The Liberals uncovered scandal in every direction,” says Mr. Dexter. The boot scandal, the remount scandal, the binocular scandal, the surgical dressing scandal. In the debate on the 1915 Budget, Laurier abandoned the position he had taken in August, 1914, and in the early months of the war. It was, he said, impossible to hush criticism. “It would mean,” said Laurier, “that parliamentary institutions, while good enough in time of peace, would have to be discarded in time of war. It would mean that the Government, which in time of peace under our system should be kept under vigorous observation, in time of war should be given an absolutely free hand. It would mean that the

Opposition, which in time of peace has the right to approve or disapprove, to oppose or to consent, would in time of war be inhibited from any criticism, even though wrong were to be rampant under our eyes. I have not so read Parliamentary history ... If we believe that in the method of carrying on the war, in the policy proposed by the Government, there be errors of judgment or otherwise, then it is our imperative duty to cry ‘halt;’ to show the mistakes, to point out the true course, and to use every endeavor to prevent the mistakes from being carried into effect.”

Later, Mr. Dexter records, the Public Accounts Committee was kept busy sifting the evidence of Government wrongdoing. Later, Sir Robert Borden appointed numerous Royal Commissions. The evidence in most cases was shocking and conclusive. Two Conservative Members of Parliament were read out of the Party on the closing day of the 1915 session.

“It is difficult to weigh the gains and losses caused by political partisanship in the last Great War. Having regard to the consequences entailed, the injury to national unity which it has taken years to repair, most people will agree that partisanship went much too far. But the record is equally clear that a political truce, even if practicable, might well have cost the country colossal sums.

“It was the Opposition Party that exposed scandal after scandal; that compelled a complete change in Government methods of war purchasing; that drove incompetent ministers out of their offices. Failing such an opposition, backed by a vigorous press; failing such constant criticism and vigilance, it staggers the mind to imagine what the cost of the 1914 to 1918 war might have been.

“The excess partisanship cost the country heavily, but the absence of criticism would have been equally disastrous in another way.”

CRITICISM supported by evidence of the need for it is not “unpatriotic” or “disloyal.”

In Parliament there ought to be the fullest criticism in every case wherein the interests of the nation and its war effort are at stake. The measure of conduct in the House must be the national interest, not the interest of any minister or any official.

The public will not, of course, tolerate loose criticism born of purely partisan motives, any more than it will tolerate government or departmental action born of party expediency. 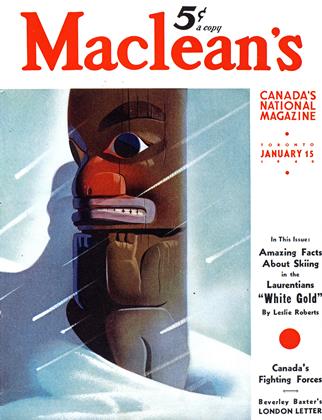