LONDON, October 5. (By cable)ߞThis is Saturday evening. October 5. Darkness has set in and been celebrated as usual by the arrival of German bombers, while our guns are blasting the air as they send their shells bursting into heavy, starless skies. With darkness, London becomes as truly a city of homes as Toronto is supposed to be. The streets are empty save for police and air-raid wardens. Theatres and cinemas are closed, and night clubs are silent shells of departed gaiety. The statue of Richard Coeur de Lion, with broken sword, stands guard over the Saint Stephen’s entrance to Parliament, with its gorgeous window shattered.

The autumn leaves lie deep in the deserted parks, and here, in my library, a boisterous fire crackles away as if determined that the guns outside should not have it all their own way. Just over us, in the black immensity of" the sky, German airplanes are droning like bees that have forgotten summer is ended. Incidentally, I spent today in my constituency, visiting places where Goering’s bombs have left their mark. Truly the mighty German Air Force is not without its glorious victories. There was a heap of bricks that was a house, but the Union Jack flies from the ruins. In a neighboring street a young man and his wife were unhurt when a bomb exploded, and they joined the wardens in a desperate fight to save their baby, whose faint cry could be heard from beneath the wreck of what was once their home. The child was dead when their cut, bleeding hands reached it.

The German nation must have its Lebensraum.

In another spot this morning I saw an elderly spinster clipping a tiny hedge in front of her cottage, which was complete except that the roof was gone. War. glorious war, had come to North Dindon. And yet, in this London Letter. I propose for a few minutes to let the warfare of the air take care of itself and turn to something which may have a more enduring influence on Britain’s future than Goering’s bombs. I refer to Mr. Churchill’s reconstruction of the Cabinet, which is more important than it might seem from the general effect of musical chairs which it gives. The immediate cause of the reconstruction was the resignation of Chamberlain from the War Cabinet, a resignation which was forced solely by the serious illness of the former Premier. It is true there had been a sustained campaign from Liberal and Socialist circles for his retirement, but Chamberlain has never lacked stubbornness. Nothing but doctor’s orders would have made him give up his position as chief lieutenant to his former enemy,

I do not propose at this juncture to reopen the Chamberlain controversy. To me Munich will always remain the most courageous, idealistic achievement any British statesman has accomplished in the past hundred years. Others think differently, and we shall leave it at that for the time being.

'"THE departure of Chamberlain left Churchill in a dilemma. For one thing, Chamberlain was Leader of the Conservative Party, and Churchill has never been if good party man. He did not want the leadership, and openly said so. Although he has the loyal support of all Conservatives in his Premiership, it is not easy to forget his past battles with the party, or the fact that not so long ago he was a Liberal. Yet Churchill is a realist as well as a romanticist, and he has seen the relentless development of a disturbing political phenomenon. The Tories have an immense majority over all other parties in Parliament,

but one by one their ministers have fallen into disfavor until we are literally a party with only two men left with any real public backing—and both of them are former rebels who tried to split the party. Churchill is one. Beaverbrook the other. The popularity of both has reached amazing proportions in the country. Churchill is regarded as the very spirit of Britain, while Beaverbrook is spoken of with awe as something between a magician and an avalanche. Where are the others? Where are the Tory ministers who went proudly to the airdrome to welcome Chamberlain on his triumphant return from Munich just two years ago? Sir Samuel Hoare is in Madrid, his political career finished. Oliver Stanley, dropped by Churchill, is a major in the army. So is Sir Reginald Dorman-Smith. Sir Thomas Inskip has gone to the House of Lords. Walter Elliot, once touted as a future premier, was allowed to resign by Churchill and is in the Army. W. S. Morrison, the Scot who was to carry all before him. has been given the Post Office, where he can do no harm. Now Chamberlain has departed for the twilight of the gods, leaving only two of his Munich team in key positions—Sir Kingsley Wood at the Treasury, and Viscount Halifax at the Foreign Office.

four square against the winds of fate, but, alas. Halifax is now regarded as being too high-minded for the rough game of modem war diplomacy, and Kingsley Wood is condemned as the Minister who failed to produce planes.

TT IS true that Anthony Eden has a respectful following -*■ in the country, but it is a fair statement that Churchill and Beaverbrook dominate the situation completely. From the Tory standpoint. eighteen months ago they were both outsiders. Today they are the nation's favorites, applauded and acclaimed on every hand. If a bomb dropped on Churchill tonight, it is more than likely that our old, obstreperous friend. Max Aitken, of New Brunswick, would be made Premier, despite the fact that he is a peer.

But there is another man, neither Liberal nor Tory, who has his own ideas about the future government of this country, and who would demand the right to lead the

nation now if Churchill were ** liquidated by a German bomb.

He has every intention of being Premier after the war, but is quite ready to assume that office i now if there came an emergency. Mr. Ernest Bevin, former farmer’s boy, self-educated boss of the Trade Union movement, and Minister of Labor, is a strong man. He is a great patriot, with a passionate love of the British Empire and a determination to see Labor in power after the war, in return for all its sacrifices now. Nothing is more complete than Labor’s loyalty in this desperate struggle in which we are engaged, but also nothing is more implacable than their intention to form the government of the country when the war is over. The moment Chamberlain resigned, it was obvious that Bevin would have every right to be appointed to the War Cabinet in his place. And let there be no misunderstanding. Churchill wanted him there, for the Premier has the greatest admiration for the sturdy, forthright qualities of the other man. But this would then have been the situation. Attlee, official leader of the Parliamentary Labor Party, already is in the War Cabinet. So is Greenwood, Deputy Labor Leader. Bevin, strongest of the three, would make the voice of Labor overwhelmingly powerful. To balance them there would only be Churchill, already overwhelmed with ten thousand responsibilities, Beaverbrook, whose interest in producing airplanes is infinitely greater than his care for strategy, and, lastly, Halifax, whose unvigorous handling of foreign affairs has seriously impaired what influence he ihight otherwise exert.

I am well aware that anything to do with party politics seems utterly trivial at this time, but it is the habit of the British to take a long view, and Churchill realizes that if he is not careful the Conservative Party, with all the great tradition it represents, and despite the huge majority given it by the country last election, might be manoeuvred into a position of impotence which would have grave consequences for the future. Accordingly, he decided to add one more Conservative to the War Cabinet. But. oddly enough, he chose Sir Kingsley Wood. I like Kingsley Wood very much, and do not decry his abilities, but there is no question he failed as Air Minister and has made no serious recovery as Chancellor of the Exchequer. It would have been a far wiser and much more popular move if Churchill had promoted Anthony Eklen. That young man has fine qualities as well as limitations, and the country would have rallied to him if Churchill had shown confidence by bringing Ekien into the War Cabinet.

Finally, almost as an afterthought, Churchill added one more Conservative to the War Cabinet in Sir John Anderson, former Governor of Bengal, and until last week in charge of Civilian Defense. Even the warmest supporters of the Government now feel the War Cabinet is too large, and that it compares unfavorably with the small body Lloyd George used in the last war. The truth is that the number does not really matter. We have three masters now—Churchill, Beaverbrook and Bevin. The first two are former Conservative rebels, while Bevin has a healthy contempt for the ineptitude of the Parliamentary Labor Party as led by Attlee and Greenwood.

Churchill, Beaverbrook and Bevin all carved their own careers, albeit Churchill’s sword had a silver handle. All three are determined to win the war, to dictate the peace, and to have a lot to say about the Britain that wiH emerge afterward. All three are forceful, tireless, fearless, arrogant, patriotic and stubborn. Not one of them gives a snap of his fingers for titles or social position, nor are they interested in the acquisition of money. Each in turn has Continued on page 41

been condemned and cheered by the mob and knows the fickleness of popularity. But all three are men of immense ability, with temperamental defects, but touched with genius. Perhaps, when this war is over, the triumvirate will form a new progressive party made out of the ribs of radical Tories and reactionary Laborites.

That, however, is in the lap of the gods. In the meantime, the Conservative party will meet soon and will undoubtedly choose as its leader the dashing descendant of the great Marlborough.

And now, as the guns won’t stop, I shall. The fire in the grate has gone to sleep, which seems an excellent idea. 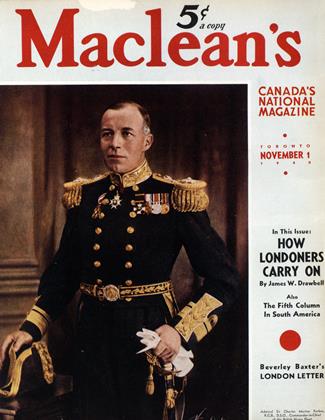