Selected by a committee of experts under a point-award system.

THE WAR has been a dominant force in deciding the course and strength of Eastern Canadian football during the season now closing.

In some ways it has restricted play, while in others it has brought capable recruits to the gridiron. All inter-university games were cancelled, with a lossof interest, color—and noise; Sarnia Imperials and Peterborough Orfuns were temporarily disbanded; every Eastern club was compelled to replace players who had enlisted, or who were engaged in war work that prevented attendance at practices. On the other hand, wartime activities made possible the formation of the Camp Borden team and the 2-25th Battery team from Sarnia. Too, through the

Among native rugbyists there were many changes in club allegiance during the past season—some necessitated by military training—and there were notable retirements, too, during the 1940 season.

All these arrivals, departures, shifting of allegiances and introduction of new teams made the task of choosing the 1940 All-stars exceptionally difficult, while injuries to outstanding players added complications. Indeed, those players who lost one or more games through accidents, could have made, in themselves, an outstanding team. Consequently, the nominating required considerable inside knowledge and rare judgment.

Fortunately, in a season when the picking reached an “all-time tough,” Maclean's secured the advice of Warren Stevens, Harold Bailey and Jim Palmer. Each of the three jurymen grew up in a different senior league; they combine the viewpoints of coach, player and official, and their names and reputations are readily recognized by Eastern Canadian football fans. Each observer, independently, nominated a first and a second all-star team. These choices were tabulated on the basis of two points for each firstteam nomination and one point for each second choice. So that a six-point total was tops.

On this impartial basis, Maclean's Magazine for the seventh consecutive season, is pleased to announce its 1940 Eastern Canadian football All-stars.

Halfback: No less than eight players were suggested for either the first or second team. The voting was close, and only one individual received the maximum. Even such stellar gridironers as Noseworthy, Montreal’s capable half; Thompson, Camp Borden; Bobby Coulter, Toronto Argonauts, and Andy Tommy, Ottawa Rough Riders, failed to place on Team Number One, and the final awards went to three chaps named Golab, Porter and Seymour.

Tony Golab, ex-Sarnian, already an undoubted star, is still the youngest regular on the Ottawa Rough Rider line-up. 1 Iere is the way one observer described a series of Golabian activities: “Golab hit for six; Golab cracked for enough to move the sticks; a brilliant Griffin-Golab-Daley end run brought play to Argos 8-yard line; Golab plowed for four; Golab repeated for a touchdown.” Even a serious mid-season injury couldn’t prevent our advisers from recognizing this gridiron great.

Bobby Porter is a natural athlete who plays every game well and brings to all of them a sturdy physique, quick mind, fighting heart and an enthusiasm that sparks a whole team. Porter has good hands, runs back punts, takes cracks at the line, starts extensions, throws short or long passes with the zip and accuracy of the professional baseballer and is a very smart hooter. In addition to doing all the duties of a halfback, Porter would also qualify for stardom as quarterback.

Frank Seymour, a Baimy Beach mate of Porter, is not a kicking half, but he is unquestionably the Golab of the Ontario Rugby Football Union. In other terms, Seymour is a plunging whiz, a player who can be used constantly, and will invariably gain the immediate objective. Defensively, Frank is strong, smart and aggressive.

Quarterback: In Eastern Canadian football there is apparently considerable versatility, for the interchanging of positions is frequent. Despite such efforts to deceive all-star selectors, Maclean’s jury has chosen a true quarterback, Orville Burke. Again the choice was not unanimous, for both Annis Stukus and Bill Stukus received support.

Burke, when surrounded by his massive Rough Rider associates, looks a bantam. But his lack of size is counterbalanced by his stamina, courage and coolness under fire. In addition, he catches well, runs back punts with dash and judgment, drop-kicks so expertly that he booted three successful converts in one afternoon, and is generally accepted as the outstanding passer east of Winnijjeg.

Flying Wing: There were several good candidates for this position, and most of them were listed on line-ups as both halfbacks and flying wings. Davies, Montreal, Selkirk, Argonauts; Zvonkin, Hamilton Tigers; O’Neil; Ottawa Rough Riders, were all high-class players, but none surpassed the ability or equalled the versatility of Sam Sward.

Sward was a Balmy Beach captain when he attracted the attention of Ross Trimble, himself an ex-Beacher, and was lured to the capital. Sam does everything a flying wing should do. He has speed, power, the talent of tackling, the art of intercepting passes, and sufficient aggressiveness to rush op|X)sing passers and kickers. In addition, Sward in Ixjth consistency and distance, is probably Canada's number one hooter.

Snap; Generally, this position is occupied by a humble hardworker, but this year Doug Turner, Hamilton Tigers gladiator, proved that a snap could be so good that he could get his name in headlines. For instance, one paper featured “Turner Stops Scullers.” The former 'Toronto University player, holder of the Copp Trophy emblematic of character, sjxjrtsmanship and playing ability, definitely caught the eye of all three nominators and they gave him the maximum six votes.

'“THERE were several aspirants to the honor of inside

Herman weighs 260 pounds, and has reached the hoary old age of thirty-four, but he still commands the respect of the experts. Defensively, “Tiny” has been the rock upon which a lot of goal-going ambitions have been badly wrecked, and you just can’t overlook a booter who is liable to earn three points whenever his team can give him a sjxff within thirty-five yards of the uprights.

Staughton lacks Herman’s educated right foot, but he is just as good defensively and is superior offensively to his Ottawa contemporary. The Argonaut inside has the power and speed to block kicks, recover fumbles and make effective tackles. With Earl Selkirk, he was the Toronto team’s nominee for the 1940 Jeff Russell Memorial Trophy, the coveted award of every Interprovincial Union player.

honorable mention from Maclean's observers, as did Jotkus of Montreal and Shuba of Balmy Beach; but again those two Ottawa giants, Dave Sprague and “Bunny” Wadsworth received the most generous supixirt.

but again—for the eleventh successive year—he stampeded Eastern football ranges. The best indication of the Sprague power is evidenced by the definite slowingup of the Rough Rider push when the Ottawa alderman cools out on the players’ bench, particularly if citizen Golab sits with him. Despite his mid-season injury, the three All-Stars nominators combined to make “Big Dave” the most starred campaigner in rugby warfare.

Despite his 269 pounds, “Bunny” Wadsworth, the Ottawa Mountie, is an outstanding footballer. While a veteran in experience, Wadsworth is only twenty-six years old and is quite fast for a big man. No one knows him as an opponent much better than our Jim Palmer, and when the ex-Toronto Argonaut lineman polled his vote for “Bunny” he remarked: “I’ll

certainly place Wadsworth on my first team. No foolin’, he’s tough, whether coming at you or holding you back.”

Outside Wings Here the experts really differed in their selection, with over thirty players eligible for the two outside wings positions and at least a dozen of them very good. Allison of Argonauts, Salter of Balmy Beach, and Edwards of Hamilton Tigers, were mentioned. Burton of Montreal and Reynolds of Balmy Beach were short just one vote each. The name players who scrambled to the top of the heap were Thornton, Argonauts, and Len Wright, Hamilton Tigers.

Hall of Fame, is a new star, but he does not suffer in comparison with other current greats. More powerful physically than most outsides, the big Tiger puts punch into a tackle that is more than merely upsetting.

Bernie Thornton is tall enough to snare high forwards, fast enough to go down under punts and nail the receiver before he gets steam up, smart enough to anticipate plays, intercept passes and recover fumbles, strong enough to keep running all day. The Queen’s University ex-star still retains those qualities that command the respect of crowds, combatants and critics.

The experts, if selecting a second all-star team, would give the awards to: 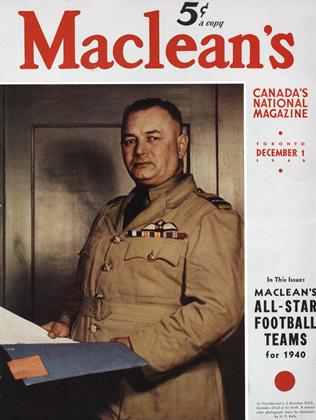