Also His Shirt—Due to the British blockade, Italy is short of cloth, with the result that sleeveless coats and shorter pants are obligatory for Italians. Il Duce was warned that he would lose his pants if he entered the war against Britain. —Porcupine Advance.

Junk—In an age becoming known for its brevity, a great number of Nazi Junkers are being reduced to a single syllable by British anti-aircraft (ire.— Toronto Slar.

The Poor Indian—Each census reveals more Indians among us than ever before. As the threat to give them back the country passes, they come out of hiding. —Sudbury Slar.

Stubborn People—A bakery chain reports ten per cent of the clientele still calling for unsliced bread. No race is lost in which such rugged individualism [XTsists.—Saskatoon Star-Phoenix.

A Stinger—The “b” in debt is silent; undoubtedly it was stuck there to supply the sting.—Banff (Alta ) Crag and Canyon.

A Needed Reform—After being out forty years a book was returned to a Syracuse. N.Y.. library. It would be nice if other libraries gave one enough time to finish best sellers.—Guelph Mercury.

Good Invention—New brake invented by a Minneapolis man enables a motorist travelling at thirty miles an hour to stop within five and a half feet instead of thirty-three feet as formerly. Sounds all right, if you wear a football helmet, a nose guard, and don’t care what happens to the rest of you.—Vancouver NewsHerald.

Superfluous — Girls attending the LeRoy High School are to be taught how to shop. Swimming lessons for the fish in the creek there will be next in order. —Buffalo News.

Cat Crime—Valuable cat which has a part in Hollywixwi movie disappears from the set. Kidnapping in this case would be a feliny.—Saskatoon Slar-Phoenix.

Clever Editor—“There are about eight miles of streets in Drumheller, and if the city undertook to pave only one mile per year the entire street area could be paved in eight years.” says the Drumheller, Alta., Mail. There’s an editor who’s a real mathematical wizard.—Ottawa Citizen.

Some Struggle—Things could he worse. While folks in Europe struggle for living space, over here we just struggle for parking space.—Windsor Star.

Minor-League Player—If prospects don’t improve pretty soon, we may expect Mussolini to go back and resume his war with Ethiopia.—Toronto Globe arid Mail.

Wit on the Wing—Even if money grew on trees, it would still be the smart birds who would get it.—Brantford Expositor.

Patched Up—Boys, it appears, like to wear long trousers. And when they grow up, many will wear them longer than they like to.—Edmonton Journal.

Click—Next to radio, the greatest boon to humanity is the little gadget that turns it off.—Calgary Herald.

Love’s Young Scream—The hard part for many a young man is to find a girl attractive enough to please him and yet dumb enough to like him.—Niagara Falls Review.

Just Passing By—Hollywood: Where they pay vast sums for realism ; then have a soprano break into spontaneous song on a balcony, to the accompaniment of a strolling philharmonic orchestra.—Sudbury Star.

Okay; It’s a Date—Not sure it’s you, tonight, same place, at eight, have green lights, or write, please write. Darling it’s the only way. Yours world's best.— Adv’t in Toronto Star.

Musical Bird—A man has made a flute from the thigh hone of a turkey. Previous to this, the bird's only contribution to music had been the drumstick.—Montreal Star.

Just Talk—The magic lantern, says a film director, was the mother of the cinema industry. The talkie, it is presumed, is the mother-in-law. — Welland-Port Colborne T ribune.

Three and Out—A local defense volunteer in a lonely spot cried "Halt!” to a man in a car, who promptly halted. “Halt!” said the L. D. V. again.

“I don’t know,” said the L. D. V. “My orders are to say Halt! three times and then shoot.”—Teeswater Netcs.

Wise Recruit—The recruit was a simple-looking lad from the country, so the sergeant thought he would pull his leg.

“Here, my lad,” he said, “let’s see how far you can climb up that searchlight.”

“Ah, you can’t catch me,” said the recruit. “I know that trick. As sewn as I get halfway up you’ll turn out the light!” —Tit-Bits, London.

“Let us take these questions in their projier order.” returned the wise girl. “The matter of cooking is not the first thing to he considered.”

“Then what is first?” he demanded.

“Can you provide the things to be cooked?”—Sarnia Observer,

“She wants to get rid of her rheumatism.”

“But why does she bring her three daughters?”

“She wants to get rid of them, too.” —Calgary Heralcl.

husband has no bad habits whatsoever. He never drinks and he spends all his evenings at home. Why, he doesn’t even belong to a club.”

Visitor: “Does he smoke?”

Wife: “Only in moderation. He likes a good cigar after he has a'gtxxi dinner, but I don’t suppose he smokes two cigars a month ”—The Economist, Toronto.

Nice Job—Cynthia: Fanny has got a war job that agrees with her. She rides about in a motor all day with a pocket full of money.

Alice: Has she had a legacy left her?

Cynthia: No, she is a bus conductor now. —Fredericton Gleaner.

No Difficulty — An R.A.F. pilot went on a solo flight and encountered six Messer: schmitts. He attacked them, beat them ; off and brought down two. On his return, a j comrade asked—“But why didn't you i send out a radio message for help?”

“Oh,” he replied, “I thought you only did that when you were in difficulties.” — Efficiency Magazine.

Well Acquainted - The pastor had just returned from a visit abroad, and a big crowd had collected to meet him. Beaming with pleasure, the good man got up to

“My dear friends.” he started. “I will not call you ladies and gentlemen because I know you too well.”—Toronto Globe and Mail.

Shocking A church dignitary noticed a little girl weeping bitterly because she had lost a nickel. Search for the lost money proving useless, he handed her another to stay the tears and soothe the hurt feelings.

“Oh,” breathed the little one in a shocked tone. “You had it all the time.” —Prairie Messenger

Small Choice—The tramp entered the bank in the grand manner. In his grimy hand he held a cheque for sixpence. He approached the cashier’s window and presented the cheque with a flourish.

“Here, my good man,” he said loftily, “you will kindly cash this for me. And, mind you, I haven’t all day to wait.”

The cashier glanced up. He took the cheque, examined it, then reached into the change drawer.

“How will you have it?” he asked. “Heads or tails?”—Welland-Port Colbome Tribune.

It’s a Hard Life—The officer of the day entered the guardroom and found it empty except for a private who. stripped to his shirt and trousers, was lounging on a chair smoking a clay pipe.

“Where’s the sergeant of the guard?” demanded the officer, angrily.

“(Jone across to the sergeants’ mess to have a drink, sir.” replied the private.

“Then, confound it, what are you doing here?” 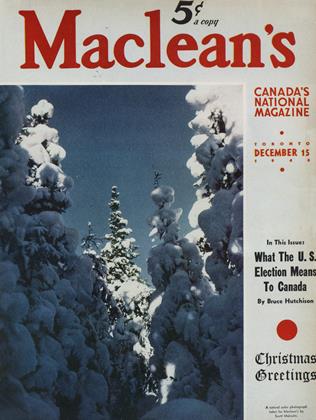