SOUP is one of those universal dishes. You meet it in any or every country —and what’s more, you’re always glad when you do.

It comes to the tables of the world in many forms and in distinctive flavors— consommé and bouillon which serve an introductory purpose, creamy varieties which provide considerable nourishment, meaty soups and fish or vegetable chowders which are almost a whole meal in themselves.

For successful service the thing is to choose a soup according to the role in which you cast it. If, for instance, you want merely to inveigle and invite the appetite for what will follow, a light, clear variety is your best bet. A little delicately flavored cream soup may introduce a simple luncheon, or a more generous serving may be the main course of a still simpler menu. Hearty versions with meat, fish and supporting vegetables are out of place as curtain raisers, but are worthy of the spotlight for supper or a late snack, at the picnic, and even in the box lunch.

Once you’ve settled on the type most fitted to its place in your particular meal, the next important thing is to bring it to the proper temperature—and keep it there. Hot or cold, but never midway between; a lukewarm soup is an abomination to its consumer and a matter of criminal negligence on the part of the cook.

Though good soup is good out of any dish, there are cups and bowls and plates which seem to be just the thing for the different types. Bouillon cups are designed for clear broth, either piping hot or chilled and jellied. Larger ones of the samé general style are appropriate for a cream of something, and for vegetable combinations, while quaint little pottery bowls and pots are smart for any substantial variety on informal occasions. Shallow-rimmed plates suit a dinner’s first course as well as a luncheon or supper's main dish. Tureens are in style again to keep a soup hot and to give an air of old-fashioned hospitality to your table.

Canned soups in their variety and excellence fill innumerable menu purposes and suit almost every taste. You can merely turn a can opener and still uphold your reputation as a good provider. But you may go a step farther and, by blending different varieties, add other flavors to your repertoire. It’s the simplest thing in the world, but even so is not a matter to be taken too lightly, not to the extent of dumping together any two you happen to have on hand. Some soups can’t get on together, others combine most agreeably, and it’s harmony of flavor that makes the merger successful. Try the recipes included here and prove it for yourself.

Soup making is not altogether a lost art with the housekeeper. Nor has she lost interest in it. On the contrary, she can and does work wonders in combining simple inexpensive ingredients to this savory end. In these busy days, however, the most popular kinds are those that require very little time or effort in their preparation. Proof that many delicious soups can be quickly and easily made is offered in the following recipes, and there are innumerable others which could be given as evidence. The real test of a soup maker is in the seasoning. Herbs, condiments and spices give a distinctive touch— a little celery salt in potato soup, a clove or two in tomato, a few' drops of Worcestershire sauce or a hint of Tabasco in others, for example.

You can’t go wrong with soup, provided you choose a type appropriate for the meal, suit the accompaniment and the garnish to it—and serve it at either extreme of temperature.

1 Quart of cooked fresh or canned tomatoes . 1 Tablespoonful of chives

1 Clove of garlic (if desired)

Put the tomatoes, chives, chopped onion, bay leaf, cloves, egg white and shell, salt and pepper into a kettle and beat with a wooden spoon which has been

rubbed with the clove of garlic. Bring to a boil, then turn the fire low and cook very slowly for half an hour. Strain w'ithout pressure through cheesecloth to get a very clear liquid. Combine with the chicken consommé, heat thoroughly and stir in the sugar, vinegar and Worcestershire sauce. Serve hot. Serves six.

1 Can of tomato soup

Ganbine the tomato soup and consommé in a saucepan, and add the w'ater. Mix thoroughly, heat to boiling and allow' to simmer for two or three minutes. Serve garnished with a thin slice of lemon, sprinkled with chopped parsley. Five servings.

1 Can of ready-to-serve consommé

1 Can of ready-to-serve chicken noodle soup

1 Can of ready-to-serve corn chowder

1 Can of ready-to-serve cream of onion soup

Turn the soups into a saucepan, heat

and serve at once. Six servings; tw'othirds cupful each.

1 Can of condensed Scotch broth

1 Can of condensed tomato soup

1 Can of condensed j>ea soup

Combine the tomato and pea soups, stirring to blend evenly. Then add the Scotch broth and finally stir in the water, using the can as a measure. Eight to ten servings.

2 Tablespoonfuls of butter 2% Cupfuls of milk Pepper and salt

Slice the onions paper thin, and fry lightly with the butter. 1 Ieat the milk in a double boiler, add the seasonings and the onions, and cook for ten minutes. Combine with the beaten egg yolk and reheat two minutes longer, then add the grated cheese and serve at once.

Wash the beans, and then soak them overnight in about two quarts of water. Then drain, add two quarts of fresh water, the sliced onion and the tomatoes, and cook gently for one hour or until the beans are tender. Add the diced potatoes, salt, green pepper and frankfurters. Cook for fifteen minutes longer and serve hot. Serves eight to ten.

1 Small can, or half large can

Mix the flour smoothly with a little cold milk, then stir into the remaining milk which has been heated. Cook, stirring constantly until thickened, and add the seasonings. Drain the oil from the salmon and break up into small even pieces, then add the sauce. Reheat and add the butter. Serve garnished with a thin slice of lemon or a sprinkling of chopped parsley.

Heat all the ingredients together in a double boiler for fifteen minutes, stirring occasionally. Remove the onion slice and beat the mixture with a rotary egg beater until the peanut butter is thoroughly combined with the tomato soup. Serve hot. Serves from four to six people.

Boil the fish bones in about two-and-ahalf cupfuls of water for half hour. Place the bacon in the top part of a large double boiler, then add the tomatoes, diced potatoes, shredded whitefish, chopped green pepper and onion. Pour over this one-and-a-half cupfuls of the fish broth, bring to a boil and then cook over boiling water for a half hour. Remove the bacon, then season, add the hot milk and the broken soda biscuits. Stir well and serve hot. Serves six.

Add the pork meat to the soup stock and allow to simmer for one hour. Remove the pork and add to the boiling stock the beets, carrot and onion, which have been peeled and cut in thin slices, and the potatoes, which have been peeled and cut in quarters. Boil for fifteen minutes, add the tomato sauce and the sugar and mix well, add the vinegar and continue the boiling until the vegetables are quite tender. Serve in large soup plates and on each one place one tablespoonful of sour cream. Six to seven servings.

Wash the peas and soak in cold water overnight. Drain and add two quarts of fresh water, the salt pork, the onion, seasonings and celery. Cook slowly until the peas are soft—three to four hours— then rub through a sieve. Melt the butter, blend in the flour, add a little of the hot strained mixture, stirring until smooth, then add this paste to the soup. Combine well and stir constantly over heat until the mixture has thickened. Add the milk, bring to the boiling point and serve hot. Six servings.

7 Tablespoon fuis of sugar (about)

Add the tapioca, raisins and salt to the boiling water and cook until the tapioca is transparent. Remove from the fire, add the cranberry and orange juice and sweeten to taste with about seven tablespoonfuls of sugar. Heat again, but do not boil. Serve hot or cold with a little sweetened whipped cream. Four servings.

A POPULAR fallacy is that heart disease can develop overnight. Under the stress of great excitement a man’s heart may suddenly stop beating. But it wasn’t a sudden heart disease that killed him. It was past neglect, past heart strain and perhaps a past infection. The excitement simply put a sudden extra load on the weakened organ, a load it was unable to carry. The accumulated results of the man’s daily habits were really to blame. Perhaps his diet was too rich in fatty food; more likely he didn’t get sufficient exercise.

The average person is more likely not only to skip necessary exercise, but also to

load up his furnace with too much fuel in the form of heavy food. A furnace packed with coal and lacking an adequate draft, goes out. A heart packed with foodcontaining blood and lacking the oxygen necessary to burn it, also goes out. The only difference: the real furnace can be started again.

Hard on a weakened heart is fear and worry. During periods of emotional stress adrenalin is discharged into the blood stream by the endocrine glands. The instant effect is a quickened pulse. The heart action is increased and the blood flows faster.—Parade. 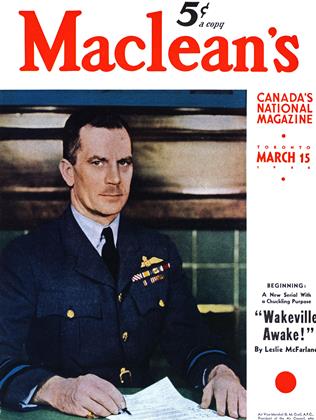