BEING, as we are, staunchly on the side of right, and opposed to wrong, holding always that honesty is the best policy and crime does not pay, we report with considerable satisfaction upon the disaster that befell the evil men who not long ago broke into the store of MacMillan and Livingston, in New Glasgow, N.S. The rogues pried open the cash drawer. It contained seventy-four cents in change. They grabbed the money, then hurried away through a small rear window. Scrambling through the window, they dropped a fifty-cent piece and a quarter. Next morning Mr. MacMillan and Mr. Livingston discovered the theft. They also discovered the seventy-five cents the burglars had left behind, which they put in the rifled cash drawer, thus establishing, we believe, an all-time record as the only storekeepers who ever made a net cash profit out of a robbery.

Frank and free declaration of intentions contained in a classified advertisement published in the Western Producer:

WANTED—YOUNG MAN TO HELP IN small garage, must be good dry milker, year round job.

Yes, yes. We know that sort of a garage.

In recent years the district around Rocky Mountain House, Alberta, has received an unusual influx of Sorensons. There are more than a dozen Sorenson families living in the Rocky Mountain House area now, and the multiplication leads to certain confusions, especially with regard to mail deliveries.

Mr. Gordon Sorenson, who operates a bus line between Rocky Mountain House and Red Deer, took steps in the matter of a bill sent him by a Calgary garage he had never even seen. Returning the account, he wrote, “If this is for work on a Ford, try Knud Sorenson; for an International, Carl Sorenson; a Marquette, Chris Sorenson; and if it's for a horse and buggy, send it to Bill Sorenson.”

When the Liverpool, N.S., Advance reported the recent marriage of Eric John Whynot to Rose Maud Whynot. in the Liverpool Baptist Church parsonage, it was inevitable that the item should carry the customary heading, but odd that it should have worked out like this:

In the March fifteen Parade we reported on an unusual bit of outdoor advertising exhibited beside the Gateway Service Station at Nipawin, Sask., where a heavy tractor of ancient lineage carries a sign across its front bearing the strange device: VOTE FOR LAURIER. The undercover agent submitting the report confessed complete ignorance of how such a thing came to happen.

Mr. Paul Horne, proprietor of the Gateway Service Station, saw our comment—we get around a lot—and now comes forward generously with a full explanation, supported by photographic evidence. The patriarch of the machine world, Mr. Horne says, is of a vintage used when King Edward VII ruled the British Empire, and Sir Wilfrid Laurier was Prime Minister of Canada. Last year, under Mr. Horne's expert coaching, the venerable troglodyte was taken from its honorable retirement and proceeded, propelled by its own power, to take a prominent part in Nipawin’s Dominion Day celebrations. To emphasize its great age, Mr. Horne attached the VOTE FOR LAURIER sign to the front of the engine. On the sides, two other signs were displayed, reading: BY APPOINTMENT TO HIS MAJESTY KING EDWARD VII. After the big doings were over, Mr. Horne simply left the signs as they were. We admire Mr. Horne, not only as a first-class mechanic, but as a darn good publicity man, too.

Hon. J. G. Gardiner, running in Melville, Sask., was the only one of three candidates seeking election for Melville, who lived inside the constituency. When Mr. Gardiner went to the polls to cast his vote, he found that his name was not on the list.

The distinction of being the smallest polling division in Canada is claimed for the village of Dot, B.C. On election day a deputy returning officer and a poll clerk had to drive eighteen miles from Merritt, B.C., to record exactly four votes in Dot.

At Drummondville, Que., the Central Liberal Committee issued invitations for a soiree at the Aetna House. Guests were urged to: “bring along the wife and the girlfriend.”

The boys in the telegraph offices whose job it is to monitor radio programs broadcast over their companies’ lines, have to listen to an awful lot of drivel. They must listen to it attentively, too. No wandering off to loot the icebox and letting the dreary commercial drift on unheard. But, we are assured by a scout on duty in the Toronto headquarters of Canadian National Telegraphs, the life has its compensatory moments. Once in a while a laugh breaks through the wordy opiates, temporarily banishing boredom. Our reporter cites as a recent instance the CBC announcer, who, describing the emotional reflexes of Mr. Clark Gable as Rhett Butler, and Miss Vivien Leigh, in a motion picture that needs no free advertising from this department, told his network audience that at one point in the performance, “Hitler tells Scarlett O’Hara he loves her.”

We hear from British Columbia, of a village in the East Kootenay district possessing a main street that is also a part of the southern transprovincial highway, and therefore a responsibility of the provincial government. Spring rains played hob with the roadbed, so that it became little better than a series of mudholes, many of them filled with water.

On a recent occasion the Deputy Minister of Public Works drove into the village, parked his car in front of a main street restaurant and went inside for a meal. When he emerged he found that some ingenious citizen had planted three decoy ducks in a big puddle practically under his car, and posted alongside them a warning notice: No Shooting in These Waters.

By way of a farewell salute to the 1939-1940 hockey season, a Winnipeg operative reports that when players of the Toronto Maple Leafs and the Detroit Red Wings engaged in their free-for all battle during the Stanley Cup series, Foster Hewitt had barely finished describing the Donnybrook as “the greatest in the history of the N.H.L.,” when the loud-speakers broke through with a musical selection: “I Love You Truly.” 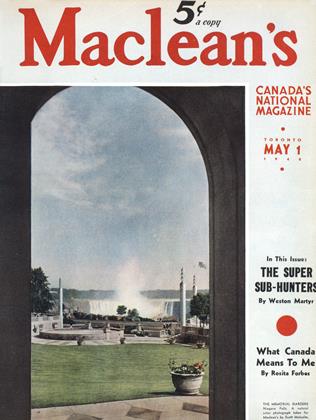