THE GREATEST migration of human beings that the world has ever seen is under way at the present time, states Every Week Magazine, and it goes on to tell how forty million Chinese are moving from east to west in China in order to escape the Japanese invasion.

Forty million! It makes all the moving hordes of history look small. Armies of Genghis Khan, Attila the Hun, even Persian King Xerxes, were not a tenth this big. The most famous refugee trek of the past, the Israelite flight from Egypt, involved 3,000,000 people by the most expansive estimate.

Where are they heading for. the millions? And what do they expect to do when they get there?

Provinces in the west and southwest are their goal. No railways carry refugees comfortably all the way. All China has about 9,000 miles of rail, mostly in the east. Contrast that with the United States’ 253,000 miles. River boats, roads that are often rough trails, some buses— the refugees ride when they can, walk when they have to.

Great numbers of people have come as far as Szechwan province in which the National Government has its temporary capital. Chungking. Szechwan has been called the rice bowl of China. It is hilly country, endowed with coal. iron.

I salt and other valuable minerals, as well as i its productive soil.

Kweichow and Yunnan are provinces south of Szechwan, which have been getting large waves of migrants. China’s wild west, this rugged tableland might be called.

Some observers foresee that if China’s struggle with Japan continues long enough, the Nationalist capital may have to move even farther up the Yangtze than it now stands, to Yunnan's provincial capital. Primitive mining ventures have long worked at coal and iron, copper and tin deposits, but the tableland is still unexploited.

Two more provinces have shared notably in the refugee invasion: Kwangsi and Western Hunan, lying east of the tableland.

Handicapped by lack of funds and weak trans[)ortation. the Chinese are organizing their boom area with a resourcefulness amazing to an onlooker, reports Dr. I). C. Graham, of the West China University. Fortunately for Chinese pioneering, the brains of China have been included in millions on the march.

“Many Chinese businessmen,” explained Dr. Graham, “have come west, bringing their factory hands and machinery to make a new start. China’s trained scientists are improving agriculture, exploring for iron, copper and other minerals, giving expert advice to factories, starting projects to improve forestry. Chemists are testing resources found in the west. They seek especially new sources of iodine and other materials formerly imfjorted.

“More than 10,000 co-operative factories have been organized to use the raw materials, and to give employment to the newcomers, and to provide the manufactured goods which the growing population of the west needs. Motor roads are being constructed. More than thirty universities driven out of East China are re-established in the west.”

“University graduates who volunteer to fight have been told that their duty is to teach soil conservation, or sanitation, or whatever special knowledge they have to give.

“Leaders who got their education in American universities are establishing upto-date schools for the children. Most of the skilled mechanics and others with training among the refugees have been employed by the Government and by institutions needing their services. All this accounts for the great progress West China is experiencing.”

Sometimes refugees have been imposed upon by other Chinese, looked down upon, even robbed. But on the whole. Dr. Graham can speak highly of the reception that West China has given to the newcomers.

China’s west counts in remoteness both an advantage and a handicap. Settlers feel safer from Japanese raids. Factories can manufacture goods without much danger of being bombed. But isolation brings serious disadvantages for communication and transportation; especially, with Japan hammering at every avenue by which Nationalist China gets supplies.

Chungking surmounts some transit difficulties by taking to the air. By air Chungking is only three days from San Francisco.

China's new pioneering should not be thought of as too closely similar to the opening of America’s wild west, Dr. Graham feels. Unlike American plains and wilderness inhabited by scattered groups of Indians, the regions of West China that are drawing pioneer millions are mostly already thickly settled when they arrive.

Big cities, more or less modern, already existed along the river highways. Some have histories more than 2,000 years long. The capital. Chungking, for example, has had a city wall since about 320 B.C. and it was one of the most densely packed of Chinese cities before the war brought to Chungking refugee hordes and governmental responsibilities. 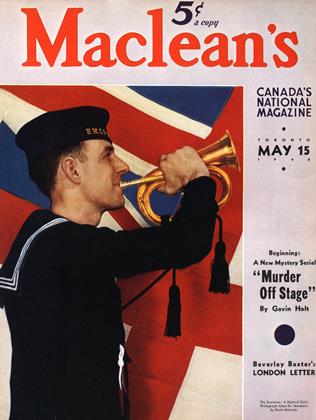