MONEY counts in winning the war. Your money and mine, for dollars spent in the right places work to our own and our country’s advantage.

Canadian housekeepers in their job of catering to the nation can serve effectively on the economic front. It hasn’t been necessary so far to put the family on rations, to do without this or that, or to substitute something good for something better. We would—and gladly—if the need arose, but right now we are facing an entirely different situation. We are asked to buy and use the surplus supplies of certain foods, thus preventing waste and assuring the producers and distributors a decent wage and a decent measure of prosperity.

Here’s a problem for you to solve. Canada produces on an average of 85,000 cases of canned lobster each year. In peaceful times about 70,000 of them find their way to English tables and provide a source of considerable revenue to Canadian fishermen. This year they stay at home, ready to bring enjoyment to the menus of those who do their duty by them.

By serving lobster we can perform a patriotic act pleasantly and profitably from the standpoint of delicious flavor. Nor will it unbalance your budget to do so, for while it’s one of the aristocrats of the fish family, it gets along well with other foods and can be used in many economical combinations. A little of it goes quite a long way in giving character to a dish—soup, chowder, a scallop of some kjnd, a salad or a sandwich filling in one of their many variations.

So when you want something special for the family meal as well as a party, try one of these distinctive flavor blends. See if you don’t make a hit with it while at the same time supporting Canadian industry, which in turn contributes money and men to our war effort.

Pick out the claws from the cans of lobster and set aside. Flake the remainder (about two cupfuls) and add the seasonings, the egg yolk and mix well. Stir in the white sauce and allow the mixture to cool. Then shape into cutlets, roll in cracker crumbs and fry in deep fat—390 deg. Fahr. —until golden brown. At the small end of each cutlet insert a claw as garnish. Serve hot with fresh green peas.

1 Teaspoonful of dry mustard y2 Cupful of mayonnaise (or more)

Pick out the lobster claws and flake the remainder of the lobster (about one cupful). Shell the eggs and cut them in half lengthwise. Mince the yolks and combine with the flaked lobster, chopped celery, chopped green pepper and mustard. Moisten with mayonnaise and then refill the whites with this mixture. Serve on lettuce cups or on salad greens and garnish with the lobster claws. Six servings.

Combine the lobster meat and the egg yolks which have been mashed to a paste. Add the chopped parsley, the white sauce and seasonings to taste. Fill ramekins,

shell saucers or lobster shells with the mixture, cover with buttered crumbs and bake in a moderately hot oven—375 deg. Fahr.—until nicely browned.

Salt and pepper and paprika Dash of Worcestershire Sauce

Melt the butter, add the chopped vegetables and cook, stirring frequently until delicately browned. Add the flour and stir until blended and smooth. Gradually add the stock, stirring constantly until thickened. Simmer until the vegetables are tender. Add the flaked lobster and season to taste with salt, pepper and paprika. Add a dash of Worcestershire or other condiment sauce and the chopped parsley. When piping hot. turn into lightly buttered individual ramekins and cover the top with fine bread crumbs. Dot with

butter and place in a hot oven—425-450 deg. Fahr.—until nicely browned. Serve in the ramekins. Five or six servings;

1 Tablespoonful of flour Juice of half a lemon

and bouillon cube if desired)

Melt the butter and cook the onion in it until a light brown. Add the curry powder and flour and stir until well blended. Add the lemon juice and stock, stirring until smooth and thickened. Add the lobster, heat thoroughly, and serve at once with hot cooked rice.

1 Can of tomato soup

Melt the butter, cook the onion and green pepper in it until tender. Add the

I paprika and flour and stir until well blended. Add the tomato soup gradually, stirring until smooth, then add the rice and the prepared lobster. Heat thoroughly and serve at once. Serves six.

Flake the lobster and put it into a greased baking dish, sprinkle with salt and pepper and dot with butter. Make a custard of the remaining ingredients: beat the eggs slightly with the salt, mix the flour to a paste with a little of the cold milk, add the remainder of the milk and combine with the beaten eggs. Pour over the lobster in the baking dish. Set the dish in a pan of hot water and bake in a moderate oven—325-350 deg. Fahr.—until set. Serves four to six.

Sprinkle the prepared lobster with the lemon juice and allow to stand until the hot mixture is ready. Melt the butter, add the minced green pepper, the chopped pimiento and the sliced mushrooms, and cook for five minutes. Stir in the flour, blending until smooth, then add the milk gradually, stirring constantly until thick. Add the flaked lobster and the minced yolks of the eggs. Reheat, season to taste with salt and pepper and serve very hot on toast points, in patty cases, in shell servers or croustades. Sprinkle the finely chopped hard-cooked egg whites over the top. Serves six.

1 Teaspoonful of chopped onion or chives

Juice of half a lemon

Combine the lobster with the seasonings and add enough mayonnaise to hold the mixture together. Heap on toast fingers or diamonds, garnish with stuffed olives and serve cold.

Combine the lobster with the seasonings, add the egg and mix well. Chill thoroughly, then shape into small balls and poach in milk kept just below the boiling point. Serve on toast with an egg sauce made by

thickening the milk with a blend of the butter and flour and adding the chopped hard-cooked eggs.

Put the prepared cucumber into a saucepan with the seasonings, cover with cold water and simmer until the cucumber is very tender. Then press through a sieve and to this liquid (approx. 1J^ cupfuls) add lemon juice and paprika. While it is still hot, dissolve in it the gelatine which has been soaked for five minutes in the cold water, color if desired. Cool, and when it begins to set add the prepared lobster and sliced hard-cooked eggs. Pour into a cold wet mold and chill until firm. Serve unmolded on salad greens with mayonnaise. Garnish with hard-cooked egg, sliced stuffed olives and parsley. Serves six.

1 Pound of fresh-cooked or leftover haddock

Put the hot boiled potatoes through the ricer, season with butter, salt and pepper, add the beaten yolk of an egg. Mix well and force through a pastry tube to make a decorative border around the edge of the baking dish. Put in a moderate oven— 375 deg. Fahr.—until the mixture is heated through and lightly browned. Garnish with parsley. Serves six.

Peel the cucumbers and cook in boiling salted water for fifteen minutes, then cut in half lengthwise, scoop out the pulp, leaving as thin a shell as possible. Chop the cucumber pulp, drain, sprinkle with salt and pepper and let stand. Melt the butter and cook the onion in it until tender. Add the flour and stir until well blended. Add the milk gradually, stirring constantly until thick and smooth. To this sauce add the flaked lobster, the cucumber pulp and the bread crumbs, season with salt and pepper and pack into

the cucumber shells. Sprinkle the tops with the buttered crumbs and bake in a moderate oven—375 deg. Fahr.—for thirty-five to forty minutes. Serves six.

Melt the butter in the top part of a double boiler, blend in the flour and add the milk gradually, stirring constantly until thick. Remove from the heat, add the seasonings and the remaining ingredients, and mix well. Drop by heaping spoonfuls on a greased baking sheet, brush with the melted butter and bake in a hot oven—400 deg. Fahr.—for twenty minutes, or brown under the broiler. Serve piping hot with green peas, buttered beans or asparagus tips. Serves six.

Melt the butter in a saucepan, add the flour and stir until smooth and blended. Add the milk gradually, stirring until the sauce is very smooth and bubbles in the pan. Remove from the heat and add the beaten egg yolks. Put the lobster in the bottom of a greased baking dish, pour the sauce over it and sprinkle with the cheese and paprika. Brown in a hot oven—400 deg. Fahr.—or under the broiler. Serve piping hot.

Lobster With Tomato and Rice

Cook the diced bacon until crisp, then remove the pieces from the pan (saving until later). Add the onion to the fat and cook until tender. Then add the tomato, rice, seasonings and lobster, and heat thoroughly. Just before serving, add the crisp bacon pieces. Serves four to five. 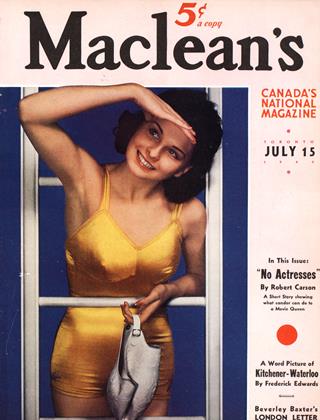