WE CAN serve our country by preserving its products. So an army of housekeepers is on the job preventing waste and providing for their families by the transformation of August’s fruit into next winter’s jams, jellies, conserves, butters and marmalades.

Culinary art and science enters into the filling of your jars with delicious flavor. But with modern methods, the guesswork has been eliminated and the old tedium banished. Commercial pectin has simplified the process, cut the time in half and made success a certainty. Recipes for its use come with each bottle or package, and if you have the good sense to follow them precisely, the results of your handiwork leave nothing to be desired in color, flavor or texture.

The long-boil method can produce excellent jams and jellies if your preserving kettle contains the correct proportion of pectin, acid and sugar. The first two ingredients are contained in the fruit, but unfortunately in amounts which vary considerably. This variation occurs not only in different varieties, but in the same fruits at different stages of ripeness, and even from season to season. All of which is a bit confusing and confounding—not to say confounded!

Deficiencies in fruit acid can be made up by adding lemon juice, by using a mixture of fully ripe and slightly underripe fruit, or by combining with tart varieties—sweet plums or blueberries with sour apples, for instance.

The pectin quality can be tested with a jelmeter. Or you can mix one tablespoon ful of cooked juice with one teaspoonful of sugar and one-half tables]X)onful of Epsom salts, stir until dissolved and let stand for twenty minutes; a firm mass forms if there is sufficient pectin for a good “jell.”

Every fruit in its season is an inspiration to the good provider, and if anything gives greater satisfaction than stocking your shelves, I don’t know of it.

y¿ Cupful of blanched almonds, or walnuts, chopped (if desired)

Combine all the ingredients and cook, stirring frequently until the mixture becomes thick and clear. Pour into hot sterilized glasses and let cool. When cool, seal with hot paraffin.

Heat the vinegar in a preserving kettle, add the sugar, and stir until it is dissolved. Add the berries and the spices which have been tied in a cheesecloth bag. Bring the mixture to a boil and cook rapidly, stirring frequently until thick. Remove spice bag and pour into hot sterilized jars and seal.

4 Cupfuls of tart apples, washed, pared and cored 4 Cupfuls of blueberries 6 Cupfuls of sugar Juice and grated rind of a lemon

Put the prepared apples through the

food chopper and add to the other ingredients in a preserving kettle. Mix and cook, stirring frequently until the mixture is thick and clear. Pour into hot sterilized glasses and seal.

Wash and stem the currants and put them into a preserving kettle with the juice and grated rind of the orange. Add the sugar and mix well. Cook, stirring frequently until the mixture is thick and clear. Add the nuts and continue to cook

for about three minutes. Pour into hot sterilized glasses and seal.

Put the pears which have been washed, peeled, cored and chopped, into a preserving kettle. Add the sugar and ginger, mix and allow to stand for two hours. Cook slowly, stirring occasionally until the pears are clear. Pour into hot sterilized glasses and seal.

Combine the cherry, apple, lemon juice and sugar. Mix well and bring to a boil over direct heat, stirring constantly. As soon as the mixture boils, add the liquid pectin, continuing to stir, and bring to a full rolling boil. Remove from the heat, skim and pour into hot sterilized glasses and seal. Makes about six sixounce glasses.

Drain and chop the cherries and combine with the lemon juice, sugar and spice. Place over the direct heat and, stirring constantly, bring to a full rolling boil. Continue stirring and boil hard for one minute. Remove from the heat and

stir in the liquid pectin. Stir and skim alternately for five minutes to cool slightly and prevent floating fruit. Pour into hot sterilized glasses and seal. Makes about five or six six-ounce glasses.

Damson plums are suggested for this recipe. They should be washed, stoned, then weighed. Add the sugar, the lemon juice and rind, and the raisins which have been washed thoroughly. Cook until the mixture is thick and clear. Just before removing from the heat, add the nuts which have been scalded with boiling water, dried, and cut or chopped into small pieces. Turn the mixture into hot sterilized jars and seal.

Grated rind and juice of

Heat the sugar and grape juice together until the sugar is dissolved. Add the lemon juice and rind, the chopped oranges and the raisins, and cook together until thickened to the desired consistency. Remove from the heat, add the chopped nuts and mix well. Turn into sterilized glasses, cool and seal with melted paraffin.

Peel and stone the peaches and cut in thin slices. Weigh, place in a large kettle, add the sugar and the juice from the cherries, and cook until the peaches are tender but not discolored. Add the cherries which have been chopped, and pour into hot sterilized glasses. Cool and cover with melted paraffin.

Mix the cider, lemon juice and sugar together in a preserving kettle and boil until it begins to thicken—about fifteen minutes. Add the cucumber and pineapple and cook slowly, stirring frequently, for about forty-five minutes or until thick. Pour into hot sterilized glasses and seal. Makes about two eight-ounce glasses.

To prepare fruit, peel about three pounds of fully ripe peaches. Remove pits and put peaches through the chopper, or cut very fine. If peaches lack flavor or tartness, add juice of one lemon.

Measure the sugar and prepared fruit into a large kettle, mix well and bring to a full rolling boil over hottest fire. Stir constantly before and while boiling. Boil hard one minute. Remove the kettle from the fire and stir in the pectin. Then stir and skim by turns for just five minutes, to cool the jam slightly and prevent floating fruit. Pour quickly into sterilized glasses. Cover at once with hot paraffin. This makes eleven six-ounce jars of jam. 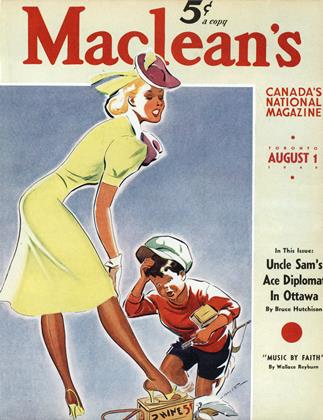