CREAMED dishes have a hundred and one variations—most of them economical and all of them good. They run the gamut from the simplest supper to swish refreshment for an evening party, from a plain accompaniment in the main course to the pièce de résistance of a meal, from one food served in a creamy sauce to a delicious medley of harmonizing ingredients.

Fresh-cooked or left-over meat, fish, eggs and any number of vegetables are enriched by creaming, and provide a long list of menu hits with many different forms of service. They may appear on toast, in patty cases, croustades or tart shells, as a scallop, en casserole or used as the filling and topping for savory shortcakes. Quite a variety show if you ask me !

Without exception creamed dishes are easy to prepare and just about failure proof. Once you can turn out a smooth, well-seasoned sauce you’ve mastered the only trick and can go on from there without worrying about the results.

Creaming is one of the best ways of dealing with those odds and ends which are apt to accumulate even in the well-run household. From such small beginnings, the cook with a flair for combinations and good taste in seasoning can produce a dish that costs next to nothing but is both nourishing and delicious. The remains of a ham may come to the table diced in sauce and topi>ed with cheese pinwheels—as smart and as tasty as on its first appearance. Left-over codfish can be dressed up and served with sauce, or corned beef will get along well with spaghetti in a creamy alliance.

Or when you begin at the beginning you can often give a novel slant to your dish and your menu. Liver timbales with a bacon sauce, for instance, in a new presentation of a popular duo. Eggs baked atop a sausage mixture, and creamed salmon encased in mashed potatoes, take on added prestige and importance for supper service.

And so it goes. Try these and prove for yourself that a saucy dish has many advantages for busy cooks and hungry families.

Grate the cheese, add one tablespoonful of milk and mix well. Beat until smooth and then add the pimiento. Cut three thin slices of white bread lengthwise of the loaf, remove the crusts and spread with the cheese mixture. Roll up like a jelly roll, wrap in a damp towel and let stand until the creamed mixture is ready. Cook

the diced asparagus in boiling salted water until tender. Drain and boil down the liquid to one-half cupful. Cook the onion in the butter over low heat, stirring occasionally. Place over hot water, add the flour and stir until well blended. Add the one cupful of milk gradually and stir constantly until smooth and thickened. Add the asparagus liquid, ham and asparagus. Reheat and pour into a buttered baking dish Slice the cheese roll and arrange the pinwheel slices on top of the mixture. Brown under the broiler and serve at once. Six servings.

Cauliflower with Cream of Mushroom Sauce

over the top of the cauliflower. Serve at once. Six to eight servings.

4 Tablespoonfuls of flour 1} 2 Cupfuls of milk

Melt the butter in a saucepan, add the flour and stir until well blended. Add the milk gradually, and continue to stir until smooth and thickened. Add the seasonings, celery and almonds. Heat thoroughly and serve. Six servings.

3 Tablespoonfuls of flour 1 )-2 Cupfuls of milk

Melt the butter in the top part of a double boiler, add the flour and stir until well blended. Add the milk gradually, stirring constantly until thickened. Add the salt, pepper, nutmeg and onion. Combine this sauce with the spinach and cheese, and place in a buttered casserole. Spread the mashed potatoes over the top, and bake in a hot oven—4(X) deg. Fahr.— for about twenty minutes or until the potatoes are brown. Six servings.

1 Tablespoonfuls of fat from salt jxirk

Bring the salt ix>rk slowly to the fxiiling point, drain and dry. Dice or cut into thin slices about two inches long, and fry over low heat until crisp and brown. Measure one and a half tablespoonfuls of fat from jx^rk and blend with flour in the top of a double boiler. Gradually add the milk and stir constantly until thickened. Season to taste. Reheat the salt pork, combine with the sauce, and serve on toast jxjints. Four servings.

Scald the liver with boiling water, coat with flour and cook in a frying pan until tender. Put through the food chopix*r and add the seasonings. Melt the first four tablespoonfuls of butter in a saucepan, add the flour and stir until well blended. Add the milk gradually and continue to stir until the sauce is thickened. Add slowly to the eggs, stirring constantly, and then stir in the ground liver and mix well. Pour into greased individual baking dishes or custard cups, and bake in a moderate oven —350 deg. Fahr.—for about thirty minutes. Unmold on a platter and serve with a creamy bacon sauce. To make the

sauce, melt the four remaining' tablespoonfuls of butter in a saucepan, add the one and a half tablespoonfuls of flour and stir until well blended. Add the milk gradually, stirring constantly, until the mixture thickens. Then add diced bacon and seasonings. Six servings.

32 Teasp;x>nful of salt Teaspoonful of peppier

Melt the butter in a saucepan, add the flour and stir until well blended. Add the milk gradually and continue stirring until the mixture is smooth and thickened. Stir in the tomato catsup and add the seasonings. Add the corned beef and spaghetti, heat thoroughly and serve at once. Four to five servings.

Melt the butter in a saucepan, add the flour and stir until well blended. Add the milk gradually, stirring constantly, until thick and smooth, then add the seasonings. Pour part of the sauce slowly over the beaten egg, mixing well. Add the rest of the sauce and cook for three minutes longer. Combine the sauce with the fish which has been sprinkled with the lemon juice. Put into a greased casserole or individual custard cups, place in a pan of hot water and bake in a moderate oven - 350 deg. Fahr.—for about thirty to thirty-live minutes. Serve unmolded with tomato sauce, garnished with parsley. To make the sauce, combine the soup, water and seasonings and heat thoroughly. Fight servings.

1 Teaspoonful of lemon juice Salt and pepper to taste

2 Cupfuls of mashed or riced

Combine the flaked salmon, the corn and the white sauce. Add the lemon juice and seasonings and mix thoroughly but lightly. Line the bottom and sides of a buttered baking dish with mashed potatoes and turn the salmon and corn mixture into the centre. Cover with mashed potatoes and hake in a moderately hot oven—375 to 400 deg. Fahr.—for twenty to thirty minutes. A rich white sauce, to which chopped hardcooked eggs have been added, may be served with this if desired. Six servings.

1 Can of condensed chicken and

Melt the butter in a saucepan, add the mushrooms which have been washed and sliced and cook slowly for ten minutes. Add the flour and stir until well blended. Combine the milk and the soup and add gradually, stirring constantly, until the mixture thickens. Add the pimiento and pepper and serve piping hot in tart shells, toasted bread cases or on wafflles or toast points. Six servings.

Cook the sausage—cut in half-inch pieces—in a frying pan until light brown, stirring frequently to brown evenly. Pour off the excess fat. Melt the butter in the top part of a double boiler, add the flour and salt and stir until well blended. Add the milk gradually, stirring constantly, until smooth and thick. Season with salt and pepper. Add the cooked sausage and pour into a shallow buttered casserole. Break the eggs on top of the mixture and sprinkle with the buttered bread crumbs. Bake in a moderate oven—350 deg. Fahr, —until eggs set. Six servings. 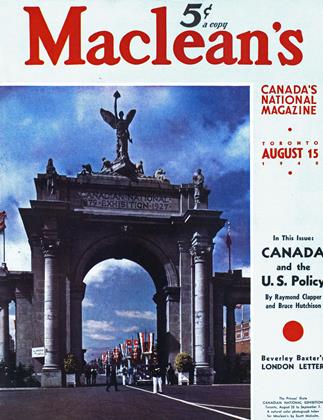