In the Editor's Confidence September 1 1940

TWO CENTURIES AGO, an English essayist, Alexander Pope, wrote: ’Tis education forms the common mind: Just as the twig is bent the tree's inclined. The English-speaking peoples have never doubted the truth of this statement, but never have they applied it as thoroughly as have the leaders of the Nazi and Fascist movements. We may dislike the shape of the trees they produce, but we cannot very well deny that when they set out to bend their twigs, they certainly bend them.

Nor has their twig-bending been confined to the juvenile plantations on German and Italian home soil. Long before the war, and in preparation for it, they sent twig-benders to other lands all over the globe. They sent them to Canada. Parents of German and Italian origin were exhorted to send their children, most of them born in this country, to special school classes, there to learn the language of their fathers. But there was more to it than that. The school readers taught youngsters to Fleil Hitler or to idolize Mussolini. They were taught, these Canadian-born children, to chant, “I am a German child,” or “I am an Italian child.” They were taught that the highest ambition they could have was some day to die, if necessary, for the Fuehrer or for II Duce.

When Canada declared war on Germany and then on Italy, these schools were promptly closed. The twig-benders were interned. But the story of the children whom Hitler and Mussolini hoped would grow up to be good Fifth Columnists should be read with profit by all Canadians. Roy Davis tells that story on page nine of this issue of Macleans.

#To Judith Saltmarsh there came a letter from South America. It was from a Spaniard who reported that his peons, gathering fuel in the hills, had found an Indian dying of hunger and a bullet wound. All the Indian could gasp was “Send! Send!” Clutched in his hand was an envelope bearing these words: “Will

anyone this note may reach be kind enough to stamp and mail it? Life may depend on it.” The address was Judith’s. The handwriting was her brother’s. But inside the envelope there was nothing. Forthwith, Judith sailed for South America. There she hunted up Driscoll, a mining man w-ho knew the Andes well. Followed an extraordinary expedition into the unknown, a journey fraught with danger, mystery and romance, and. at the end, a remarkable El Dorado. By this time we hope you will be interested enough to turn to page five whereon we present the first installment of “El Dorado.” a new serial by Allan Swinton. We think it’s a rattling good yarn.

#We are told that in New Zealand many of the parliamentary debates are broadcast. and that the knowledge that the public is listening to what they are saying has a salutary effect upon members inclined to be long-winded. In Canada, the only ways in which a citizen can gauge a debate in its entirety are (a) by attending every session; (b) by reading Flansard. We haven’t heard of any ordin-

ary taxpayer sitting through an entire session, and few people outside of legislative circles (only about 1,500) read Hansard. Hansard, of course, is the printed record of parliamentary proceedings.

If you have visited the House of Commons, then you will know that in the aisle between the Government and Opposition benches, facing the Speaker, there sits a man who wields a pen with unceasing vigor. He is the shorthand reporter, relieved every ten minutes or so by a colleague. One slides in and the other slides out so unobtrusively that it is difficult to detect the change. But, there they are, one at a time, writing down every word that is uttered. It’s quite a business, is Hansard, and on page eight, I. Norman Smith tells you all about it.

On page eighteen, we continue our series on Canadian cities. This time, Frederick Edwards describes “Garden City.” which is the description liked most by the people of St. Catharines, Ontario.

Incidentally, we have received from City Clerk Lips of Kitchener a letter in which he records that the Municipal Council of that city, at a regular meeting on July 22, unanimously passed a resolution in these terms: “That this Council express its appreciation of the publicity which this City has received from the special article on Kitchener, which was featured in Maclean’s Magazine of July 15th issue.”

#Major Hilary Yeats-Mowbray was an “alwayser.” He always shaved with a straight blade razor. Fie always had two eggs for breakfast. The only time he did not eat the second egg was the morning his first egg was doctored with strychnine. A few minutes later, Kent Power, the scientific detective, was on the job, with a thoroughly competent job of murder to solve. “Two Eggs for Breakfast,” another Benge Atlee story, will be found on page ten.

#Folks of the district used to call Jim McRay’s farm “Spavin View.” For Jim never could resist a cast-off horse. He would buy aged and infirm horses and pension them off. To Lo. who was looking forward to the day when Jim would have a home ready for her, all this seemed a foolish way to spend money. So, when Jim went to town, she served a two-word ultimatum. It was “No horses.” Jim bought a horse, a jumper whose jumping days were thought to be over. Then the storm broke. In fact, two kinds of storm broke. There’s quite a bit of excitement in “Thoroughbred,” Newlin B. Wildes’ story on page sixteen.

#“Boy, if this ain’t the life of Reilly! Travelling around the country in Pullman cars, staying at the best hotels, and watching a ball game every day. If a fella had a million dollars he couldn’t do nothing more with it.” So spake Tim Daly, veteran trainer of the Toronto Maple Leafs, both the baseball and hockey Leafs. And a rare character is Tim. On page fourteen, Dink Carroll shows how. 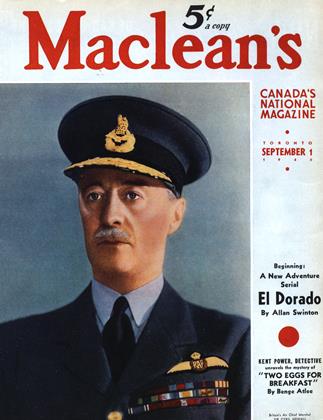