SPANIARDS, Italians, Walloons, Germans, Flemings and "Fugitive English," crowded French and Netherlands channel ports (one of them Dunkirk) just 352 years ago, itching to get at England's throat, and waiting for the Spanish Armada to come and relieve the blockaded ports and convoy these armies across the Channel. Providence, working through storm, fireship3 and a dauntless Queen and British Navy ruled out that threatened calamity. Today another foe threatens, and again "This precious stone set in the silver sea" must become a fortress manned by brave hearts determined that it shall never lie at the proud feet of a conqueror.

How did our forebears of three and a half centuries ago meet the threat that faced them only the width of the English Channel away? A quaint old document in fading old-fashioned print of the days of Good Queen Bess tells the story. The pamphlet is entitled "The English Mercurie - Published by Authoritie—For the Prevention of false Reportes,” and is dated “Whitehall, July 23d, 1588.”

The above date was two days after the Spanish Armada had been sighted at the entrance to the English Channel, but let this old broadsheet with its F-shaped S’s and prodigality of capital letters and final E’s speak for itself.

“Earlie this Morninge arrived a Messenger at Sir Francis Walsingham’s Office, with Letters of the 22d from the Lorde High Admirall on board the Ark-Royal, containing the following materiali Advices.

"On the 20th of this Instant Capt. Fleming, who had beene ordered to cruize in the Chops of the Channell, for Discoverie, brought advice into Plymouth that he had descried the Spanish Armado neare the Lizard, making for the Entrance of the Channell with a favourable Gale. Though this Intelligence was not received till neare foure in the Aftemoone, and the Winde at that time blew hard into the Sound, yet by the indefatigable care and diligence of the Lorde High Admirall, the Ark-Royal, with five of the largest Frigates, anchored out the Harbour that very Eveninge. The next Morninge the greatest Part of her Majestie’s Fleete gott out to them. They made in all about eighty Sail, divided into four Squadrons, commanded by his Lordship in person, Sir Francis Drake Vice-Admirall, and the Rear-Admiralls Hawkins and Frobisher. But about one in the Aftemoone they came in sighte of the Spanish Armado two Leagues to the Westward of the Eddistone, sailing in the form of a half-Moon, the joints whereof were seven Leagues asunder.”

The ancient broadsheet, continuing, says that the English computation of not fewer than 150 vessels of all sorts in the Armada was later confirmed by prisoners.

"Severall of them called Galleons and Galleasses are of a size never seene before in our Seas, and appear on the Surface of the water like Floating Castles.”

sailors were quite undismayed by the size or numbers of the enemy. “But the Sailors, soe far from being daunted by the Number and Strengthe of the Enemie, as soon as they were discerned from the Topmasthead acclamations of Joy resounded through the whole Fleete.”

Following a council of war, the “Lord High Admirall, observing his general Alacritie,” directed the “Signall of Battle to be hung out.”

“We attacked the Enemie’s reare with the Advantage of the Winde,” says the dispatch. “The Earl of Cumberland in the Defiance gave the first fire. My Lord Howard himselfe was next engaged for about three Hours with Don Alphonso de Leyva in the St. Jaques, which would certaynly have struck if she had not been seasonably rescued by Ango de Moneada. In the meanetyme Sir Francis Drake and the two Rear-Admiralls Hawkins and Frobisher vigorously broadsided the Enemies’ stemmost Ships . . . which were forced to retreat much shattered to the maine Body of their Fleete, where the Duke de Medina himself commanded.

“About sunset we had the pleasure of seeing this invincible Armado fill all their sails to get away from us. The Lord Admirall slackened his in order to await the arrivall of twenty fresh Frigate', with which he intends to pursue the Enemie, whom we hoj)e by the Grace of God to jrrevent from landinge one man on English grounde.

“In the Night the Si. Francis Galleon, of which Don Pedro de Valdez was Captaine, fell in with Vice-Admirall Drake, who tooke her after a stout Resistance . . , She carries fifty Guns and five hundred men, both Souldiers and Mariner . The Captours found on board five thousand Golde Ducats, which they shared amongst them after bringing her into Plymouth.”

rTvHE “MERCURIE” then reviews the preparations made on shore for beating the enemy should they manage to land. “Such preparations have long been made.” it says, “by Her Majestie’s Wisdom and Foresighte for Defence of the Kingdome, that (setting aside the Common Accidents of War), no greate danger is to be Apprehended, though the Spaniards should lande in any Parte of it.”

The various camps and the dispositions of foot and horse are detailed, and then a reference to the Queen follows. “The Queene was pleased to review them last Weeke in the Parke at Nonsuch, arc! expressed the highest Satisfaction at their Gallant appearance: In soe much, that by God’s Blessing there is no doubte but this

The routine of a large subscription list requires a period of a few days before a renewal can be recorded. A notice, therefore, may in some instances go forward to you even'^after remittance actually has reached us. In such cases, please ignore the notice and accept our regrets and thanks.

If you are not sure of the date when your subscription expires, you will find it printed on the address label on your magazine.

unjust and dareing Enterprise of the Kinge of Spayne will turne out to his everlasting Shame and Dishonour, as all Rankes of People, without respect of religion, seeme resolute to defend the Sacred Persone of their Sovereign and the Lawes and Liberties of this Countrie against all Foreigne Invaders.”

The Elizabethan broadsheet, ‘‘For the Prevention of False Reports,” continues with a report from Ostend under date July 27, 1588:

“Nothinge is now talked of in these Partes but the intended Invasion of England. His Highnesse the Prince of Parma has compleated his Preparationes, of which the following Accounte may be depended upon as exact and authentique. The Armie designed for the Expedition is selected out of all the Spanish troopes in the Netherlands, and consists of thirty thousand Foote and eighteen hundred Horse. At Nieuport are quartered thirty. Companies of Italians, ten of Walloons

and eight of Burgundians. At Dixmuyde lie readye eighty Companies of Flemings, sixty of Spaniards, sixty of Germans, and above seven hundred fugitive English, all headed by the two Irish Arch-Traitours the Earle of Westmorland and Sir William Stanley.”

Other units lying in various adjacent ]x>rts are detailed, together with the names of several Spanish dukes, marquises, dons and other grandees, who are stated in the account to be “Volunteers of the first Qualitie arrived from different countries to share in the honoure of this Enterprize.”

“For the transportation of these Forces vessels of all sorts are prepared at Dunkirk, Antwerp and Nieuport, fitted up with all manner of Conveniences. The flatbottomed Boates for the Cavalrie have Bridges fixed to them, for the more easie Shipping or Disembarkation of Horse. The Transportes for the Foote containe each two Ovens to bake Bread, in case they

from page should be kept longer at Sea than they hojie to bee.” Other incidentals of preparedness were

Other incidentals of preparedness were the providing at Graveling of twenty thousand “Cashes, ” with nails and cordage, “which can soone be throwne into the Forme of a Bí idge. And a greate Pile of Fascines is erected near Nieuport, designed fo the filling up of Ditches, covering Workmen at a siege, and other Artes of that nature.”

The Ostend writer then tells of how “little Hoyes and Barges loaded with A. ms, Powder and Provisions” were to be conveyed from Bruges and Ghent through canals cut for the purpose to Antwerp, Sluys and Nieuport, and “soe into the British Channell.” He tells Whitehall that the invasion scheme provided that as soon as the Spanish Armada came in sight the Prince of Parma was to get out with his transports and join them.

“After which they are in a Bodie to force their Waye up the River of Thames, against all Impediments, and lande as neare London as they can. But whilst these Harbours are : oe closely watched by the United Squadrones of lier Majestie and the States, commanded by the Lord Henry Seymour, it is the general Opinion that the Prince of Parma will finde it impossible to put to sea, and we hope ihe Lord Admiral Howard will prevent the Spanish Navie from being in a condition to Ra se the Blockade.”

That patriotic hope was abundantly realized, for, under divine providence, the ships that escaped the guns of Drake and his fellow admirals, and their fireships, plus the storms of the Channel and the North Sea, and the rocky coasts of Scotland and Ireland, were less than half of the proud “Armado” that was to lay England under the heel of the Spaniard and his allied invaders.

And now, 352 years after this frustrated inva ion of Britain’s tight little isle, its ramparts a e again manned by dauntless defenders as determined as ever their forebears were, to die rather than yield one foot of the sacred soil of England to an invader.

T_IOT metal surfaces are as subject to ■*“ *■ rust and corrosion as are cold ones, but no ordinary paint can be used to give them proper protection. A new chemical rust-preventing paint, named Kemick, has been developed for such hot metal surfaces. This finish, which is made by the American Chemical Paint Company, may be used on hot parts of the automobile engine, such as exhaust manifolds, exhaust pipes, and mufflers. Not only will it protect the metal, but it .also makes a more sightly engine.

Kemick becomes effective through chemical action with the metal which it covers. Whereas ordinary manifold and engine enamels decompose quickly and completely when subjected to heat Kemick decomposes only partly, the volatiles are expelled, and chemicals are liberated to react on the metal surface. It does not burn off but retains its co!or ar c! protective properties and is said to improve with heating —Scientific American. 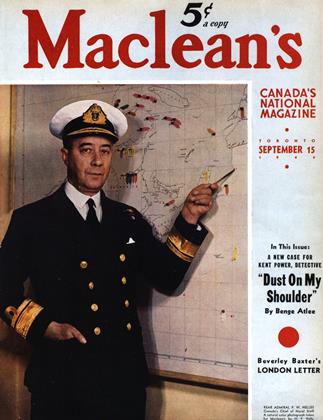