In the Editor's Confidence January 1 1941

This January 1 we are happy to tell you that a New Year Resolution we made several months ago is going to bear fruit. We resolved that we would get Douglas Reed to do a regular series of articles for Maclean’s. As a result, we now announce that during 1941, Mr. Reed will write twelve articles for us. They will deal with world events of the moment and what they portend. They will be exclusive to Maclean’s, and if the weather permits the transatlantic clippers to maintain anything like a regular airmail delivery, we should be able to space them one each month. The first article, “The War in 1941,” appears on page nine of this issue.

The occasional articles Mr. Reed has written for us since he achieved international fame through his sensationally prophetic “Insanity Fair,’’ have aroused so much interest that we feel sure our readers will regard the securing of a regular series as a ten strike.

♦Beverley Baxter’s London Letter, which next month enters its sixth year as an exclusive Maclean’s feature, will, of course, continue.

Other famous correspondents in various parts of the world will tell us what lies behind the newspaper headlines, and on this continent particular attention will be paid to Ottawa and Washington.

There is increasing Canadian interest in South America. Headed by Hon. James A. MacKinnon, Minister of Trade and Commerce, a Canadian Trade Mission is at present exploring trade possibilities south of the Panama Canal. Travelling by air, the mission will visit Colombia, Peru, Chile, Argentina, Brazil, Uruguay and other countries. The MacLean Publishing Company considered the tour of sufficient importance to make arrangements to have one of its news editors accompany the official party. He is Ronald McEachem, and articles from him will appear in Maclean’s.

♦As past performances serve as a guide to promises for the future, let's spend a minute looking back. During the past twelve months. Maclean’s has kept pace with the headlines; in some cases it anticipated them. For instance, such articles as these were tied to the conversation of the day:

“And Now Japan?” by Hallett Abend, Far Eastern correspondent of the New York Times; “Balkan Jigsaw,” by Sidney Morrell, Balkan correspondent of the London Daily Express; “The Double-Cross in South America,” by Irving Pflaurm, Foreign Editor of the Chicago Times, who made an extensive tour of South America; “How To Win—and What Then?” by Douglas Reed; “The Battle of the Fiords,”by Taffrail; “Primers of Treachery,” by Roy Davis, who exposed the teaching Nazi and Fascist doctrines in foreign language schools in Canada; “No! France Will Never Be Nazi,” by Piere Lazareff, former editor of Paris-Sor; “London Carries On,” by James W. Drawbell, Editor of the London Sunday Chronicle; “What the U.S. Election Means to Canada,” by Bruce Hutchison; “Design for a New Dominion,’’the story of the Sirois report, by R, M. Fowler, legal secretary to the Powell-Sirois Commission.

Maclean’s also gave you the memoirs of Lord Tweedsmuir; a series of articles on Canadian cities by Frederick Edwards; a series by Rosita Forbes; a series of stories and pictures on Canada’s War Effort and our Fighting Forces. We haven’t space for the names of our fiction writers, but they included twenty of the world's most famous authors.

We gave you all these things and much more. You gave us either one dollar for the lot, or five cents per single copy. Which was a pretty tidy bargain. This year you will get an equal, or even a better deal.

♦All of this leaves room for but a glimpse at this current issue. For Maclean’s, Charles Rawlings made a special trip to Saint Pierre, the French island on Canada’s front doorstep. On page ten he tells how the divisions of opinion between Vichy and De Gaulle have crossed the Atlantic. There’s a calendar of the war to date on page fourteen, Backstage at Ottawa, on page eight, and Beverley Baxter on page sixteen.

We don’t know whether you have witnessed the launching of a big ship. If so, you will have experienced the indescribable feeling which grips one as the vessel begins to slide down the ways. You may get it when you read William McDowell’s story, “The Long Ship,” on page five. And it may even be that you have a spot of Viking in you somewhere. Mr. McDowell was born in Barrow-in-Purness, served his apprenticeship in the shipbuilding yard of Vickers, Sons and Maxim, became a ship designer, attended more than sixty launchings.

♦We enter the New Year with the hope that Hitler will wish he had never lived to see 1941. 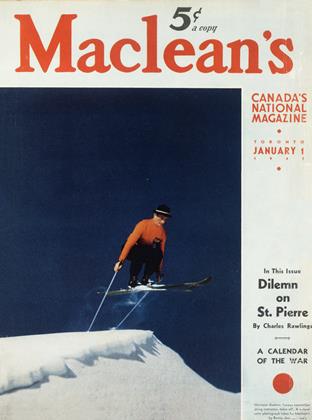