A FEW MORE FACTS TO FACE

A FEW MORE FACTS TO FACE

AS THIS is written, announcement of President Roosevelt’s $3,000,000,000 “fire hose” aid-to-Britain plan has cheered the peoples of the Empire and their well-wishers in the United States.

While the ultimate production of planes, ships and other equipment will be of such magnitude as to materially affect the war’s outcome, we must face the fact that considerable time must elapse before actual deliveries can be made.

The United States is behind schedule in its own defense program, and while Britain is to be given priority, many bottlenecks have to be removed before production for either country can be in full swing.

Prefacing the President’s announcement, William Knudsen, head of the production section of the U.S. National Defense Advisory Commission, revealed a thirty per cent lag in plane production and a serious lag in tooling for various other forms of production.

There is labor trouble, actual and incipient. C.I.O. leaders have been vigorously opposing any move to abridge the right to strike, even in time of national emergency. Manufacturers of war equipment have been insisting that they cannot turn out sorely needed supplies and at the same time keep on answering charges of unfair labor practices.

Press and public across the line have been demanding to know what is wrong and who is to blame for the hold-up in the defense program—capital, labor or officialdom.

Commenting on the situation, Time, the weekly news magazine, under the heading, “Wanted: A Head Man,” had this to say:

“Somehow both arms of the U.S. production machine had to get together, work without strikes and lockouts, work if necessary beyond the 40-hour week on some basis that would be a compromise for both sides. It was plain for anyone to see that this situation could not be fixed up by the Defense Commission. It is an advisory body without executive power, with a chairman who is busy being President of the U.S. The defense program had two major defects plain to any member of the Defense Commission, and frankly discussed (off the record) by some, that a director with plenary powers could repair in five minutes.”

THE two major defects mentioned are a scramble in priorities and a scramble in procurement. Of the first scramble, Time says that many an industry, hoping to get to work first on orders needed most, found that A-l priority was marked on ninety per cent of their work, and that priorities meant no priorities at all.

Of the second scramble, Time reports:

“Plain and understandable to many an industrialist. . . was the fact that the services, particularly the Army, do not know how to buy on 1940’s national defense scale. Most egregious example was a recent $300,000 Army order for underwear of a 1917 type, and not manufacturable on 1940 machines. Obvious remedy: organization of a procurement agency with power to receive Army-Navy specifications, lay down the orders out of industrial experience that no service officer can be expected to have.

“These were but two of many holes in the U.S. defense program. But NDAC could not fill them. Without authority to enforce its will on industry and labor, without a boss on the job 24 hours a day with full power to cut red tape, simplify procedure, settle rows, it has done its job as well as it could. The orders are let, production has begun. Whether NDAC will get a boss, whether it gets the power it needs, only one man can decide: Franklin Roosevelt.”

A few days after Mr. Knudsen’s revelation of deficiencies, the President created a new Office for Production Management for Defense, with Knudsen as director; clothed it with “full authority to direct and speed” the program of American rearmament and aid to Britain. But control is still departmentalized; there is no “head man.” The President stated that “amateurs in Governmental matters who talked of finding a czar, a Pooh-Bah or an Akhoond of Swat, proved their ignorance.” He said nobody has yet found a paragon who understands all the problems involved in production.

WE QUOTE the above comments because they bear heavily on the case of Canadian war production. Our own official spokesmen have lacked the candor of Mr. Knudsen, but the fact is that in spite of all the orders placed, in spite of “scheduled production” in many instances, there still is a lag, particularly in the most important of all jobs—the production of planes. Those chiefly concerned in that production will tell, off the record, of course, that the main cause is that of too many cooks and official indecision both here and in England.

Our own War Planning Board, charged with the task of co-ordinating war industry and establishing priorities, is at this writing still just an advisory body (as was the NDAC) without the means of achieving results.

We still stick to the opinion that a Head Man, with power to act, is needed. The political heads in Ottawa give the same reply to that as does President Roosevelt—there is no paragon who understands all the problems involved in production.

Well, the Nazis have a production czar. If we are to beat them at producing we’ll have to have one too. It is true that no one man can have knowledge of all forms of production. But there can be one man, removed entirely from political responsibilities, who can be given power to get the job done and choose his own assistants versed in various forms of production.

Appointment of the War Planning Board came because the watertight compartment idea was not functioning. That board itself cannot function successfully without a head possessing power to act.

IN THE matter of Labor, we are one up on the United States. The Government’s action in providing for a system of “cost-of-living bonuses instead of wage increases” seems to have appealed to both labor and employer alike as a fair method of protecting the employee from any sharp rise in the cost of essentials.

It seems to us to be not unlikely that the Department of Labor has been alive to the possible influence on this country of United States labor unions, and also to the fact that the United States is not actually at war while this Dominion is.

Fortunately, with a large measure of co-operation existing between labor and employers in this country, and a mutual realization of what the war means to both, the Ottawa Government should encounter little difficulty in averting industrial disputes and unrest, and in spotting quickly any agitation which might spring from subversive elements here or elsewhere.

A Fact For the People

A FACT the people of this country have to face—and Mr. Ilsley has done a good job in repeatedly stressing it—is that successful prosecution of the war depends upon the readiness with which they themselves place the country’s war effort ahead of their personal comfort. The Government rightly places war needs above everything else. And it will be expected to set an example in economy in connection with ordinary expenses. Even with rigid economy in other directions, the financial strain of the war effort is prodigious. Heavy as they are, heavier as they will be, taxes are far from sufficient to meet the cost of war. The Government must borrow; borrow from Canadians as individuals. Christmas spending demonstrated that there is more purchasing power than there has been since the boom days; purchasing power more generally spread (with the exception of the farming West) than it was in the pre-depression days. Put into the war effort, much of that purchasing power can expedite the Government’s—and thus the nation’s—task. There will be another war loan, probably in June. Earmark a portion of your income for it, for war savings certificates, for war savings stamps.

Only by an Empire victory can your security be assured. 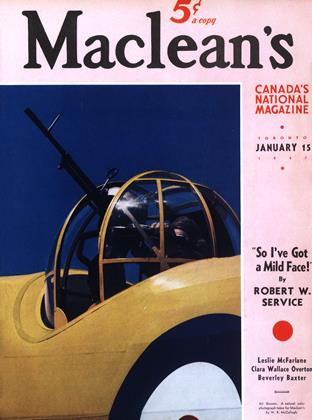