Benge Atlee is wise and brilliant in his “What Goes On Here?” and in facing the facts of Canada’s destiny.

When the day comes that democracy serves the people exclusively and faithfully, and gives us that form of society in which every man has a chance, then our crusading warriors will be fully entitled to their share. And it’s up to the Canadian people to see “that this highway of life is the road of the brave.” And decidedly not the road of the knave.—William S. Gilmore, Richelieu, Que.

I am moved to write regarding your article by Benge Atlee. Maclean’s is widely read in this district, and its articles on current events discussed at some length. Many of us feel this is the first really informative and constructive contribution toward solving our many national problems, which we have seen in print for some years.

Could not a little of our much talked of propaganda be used here to good effect, and get some of these reforms started right now? We are not ready for peace until many of these social ills are corrected. —Jean H. Stulck, Abernethy, Sask.

Maclean’s is getting better and better. I was delighted to see the article by Dr. Benge Atlee. I think it was very timely and like the spirit of it. I hope Dr. Atlee will send you some more articles.—H. S. Ross, Montreal.

I was much interested in the article by Mr. Benge Atlee: “What Goes On Here?” but Mr. Atlee does well to put a question mark at the head of his article and leave it at that, because he makes no attempt to solve the problem.

Now it seems to me that the question dealt with by Mr. Atlee is very important, and should not be

left in the air as he leaves it. It is true, he suggests a few new patches for the old decrepit capitalist system which he admits is the cause of the rise of dictators. They are useless. Better ones have been advocated, and tried before to no effect.—F. J. McNey, Craigmyle, Alta.

I have just finished reading the editorial of your Sept. 1 number, also the article by Mr. Benge Atlee, which strike me as having something in common but undesirable. Your editorial complains of some statements in United States newspapers, which were printed but without editorial comment. At the same time you print Mr. Atlee’s article, which ends with the statement about realists and horse traders having got us into the depression which preceded this war, and advising giving the idealists a chance. Now it appears to me that Mr. Atlee has put the cart before the horse. Who but idealists pursuaded the country to fall into a lot of false starts, after the last war, with such ideas as:

Our young men should never have to go to war again. Nothing in war is worth sacrificing young lives for . . . Every able-bodied man should be able to earn a decent living for self and family—decent in many instances meaning all the frills . . . Eight-hour day for laborers or even less, while farmers and their families

work from twelve to fifteen hours per day to feed the laborers.

Mr. Atlee apparently also thinks our youth need the pull of some promise of a better way of living after the war in order to produce the zeal necessary to beat Hitler. If Hitler is not beaten, and Mr. Atlee lives a short while under his domination, I am sure he will come to understand that however our way of living might have been bettered, we still had enough reason as it was to put forth our ablest effort to win. Maybe such articles as Mr. Atlee’s deserve comment as well as some in U.S. papers.—Taylor Pipe, Plaileybury, Ont.

The article by Dr. Atlee in your Sept. 1 issue was voicing the opinion of thinking people up in this part of the country also. Let us have more of these articles, and make them stronger yet.—Geo. A. Biggs, Medicine Hat, Alta.

But Not All Of It

“What Goes On Here?” by Benge Atlee, is the kind that discourages enlistment in Canada for overseas service and it is difficult to arrive at the conclusions of which is the worst offender, the one who wrote it, or the Canadian publication which accepted the responsibility of print-

ing it. Both, to my mind, are guilty of a wrong toward our country. Mr. Atlee appears to be disturbed about lack of leadership in Canada, Thank God for Mackenzie King with his quiet unoffending leadership —willing to be led by Mr. Churchill and work under him, instead of a repetition of 1914-1918 with Sam Hughes on the high seas half of his time telling someone how to win the war.—W. E. McKay, Okotoks, Alta.

I am a man who has passed the 70-year mark and have always been a great reader, and in all those years I have never read anything which appealed to me so strongly, or which in my opinion hits the nail so squarely on the head as that by Benge Atlee. I wish to comment briefly on that part under the subheading, “Wanted: Dynamic Leadership.” That one point by itself is so necessary and at the same time has been so neglected. While the voice of Churchill is sounding over Britain and the world and keeping the courage of British people up to a high standard, what do we hear here? Nothing of any account.—A. C. Abbott, Wilsonville, Ont.

The Anglo-Saxon is probably the most law-abiding type of citizen in the world and the most respectful of the political institutions of his country. That is why I was somehow bewildered to find in a letter published in your September 15 issue, and subscribed by a very English name— Mr. B. Stilwell a statement which is an open challenge to the Constitutions of this country.

Says he: “It seems to me that it is pretty near time someone made it compulsory for nothing but the English language to be recognized as the language to be spoken officially in this country.” Mr. Stilwell—who is a Canadian, I presume—should know better about the historical background, the letter and spirit of the British North America Act, than to utter this uncalled-for “One Language” war cry. As long as a group of persons in this country, in defiance of the Canadian Constitution which carries in back and white the official bi-ethnical and bi-lingual character of the nation, persist in trying to blot out by all means the articles intolerable to their intolerance, this country will never enjoy the national unity indispensable to the building of a great nation. I do hope that Mr. Stilwell—as a good Britisher, which I am sure he is—will become more loyal to the Constitution of our common and beloved country.— J. D. Richard, Montreal.

Mr. B. Stilwell’s contention regarding legal use of the French language in Canada can be disposed of in a few words. The British Government granted the French people in Canada this right, and decent nations stick to a bargain once made, even if it is not to their convenience. I might point out that is one great difference between us and Nazi Germany. Incidentally, we made no bargain in regard to language with the Indians,

although, being decent, we have never imposed our language upon them. There are numbers of Indians in the outlying portion of the country who only speak their own language, and our authorities let it go at that, and make the best of it.

I was greatly impressed with Mr. Roberts’ article. I know something of the French Canadians, and have no trouble in understanding their viewpoint. Had the conscription issue been properly handled in the last war (which it emphatically was not), there would be much less trouble now.

I believe conscription is inevitable, but would plead for that tolerance with others which has always been such a proud feature of Great Britain’s dealing with subject peoples. We English Canadians, I am of fourfold Loyalist descent, would be quickly up in arms over anything which went against our deeper feelings—or even prejudices. —P. S. Robinson, West Vancouver, B.C.

Beverley Baxter in his article, “An Interview With McNaughton,” in your issue of August 1, reports the Commander of the Canadian Army Corps as saying: “Canadian lorry drivers drive faster than the others, and have only half as many accidents.” Presumably “the others” referred to are drivers in the British Army, who are thus branded as inferior to those in the Canadian Corps. This is an astonishing statement which should not be allowed to go unchallenged. Without detracting from the admitted ability of the Canadian drivers, it would appear to be in doubtful taste for General McNaughton to praise his own men by belittling those not under his command. The latter would naturally resent such an unfavorable comparison, and indeed, if true, it would be a grave reflection on their capacity as drivers.—H. Mackney, Victoria.

The more I read of Douglas Reed’s columns in Maclean’s, the more I am impressed with the saneness, virility, and lucidity of his expressions regarding the tragic condition of our world today. Also his prophetic insight. I wonder how many of his readers realize that practically all his calculations pertaining to Hitler’s moves, have proven correct.

There is no “milk and water stuff” in Reed’s writings, and, he is patriotic enough to point out the weaknesses he observes in the armor of our precious Empire, when we are up against the most insidious murder machine of the ages.

Like Churchill the Great, it seems to me that Reed has been too long just a voice crying in the wilderness, concerning the evergrowing menace of Nazism.

The little picture of Reed, which adorns the top of his column, is characteristic of his writings; for he seems to be glancing back over his shoulder, as if in the act of telling Hitler, Goering & Co., “You fellows don’t fool me.” 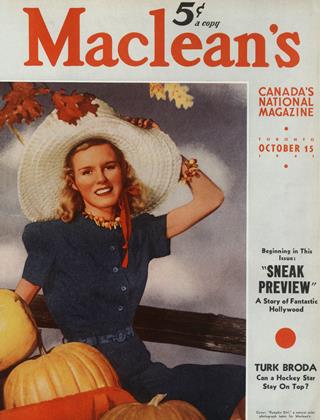