Vitamins for Your Dollar November 15 1941

AS THIS issue of Maclean’s goes to press, full l\. details of the wage and price control measure, and of the machinery to enforce it, are not available.

Judging from the Prime Minister’s statement, it is no half-way policy, but an all-out effort to avert the otherwise inevitable waterspout of inflation—the first effort of its kind in the economic history of non-totalitarian states.

The task undertaken is no light one. Mr. King did not minimize the difficulties. But the Government has acted with speed and with courage on the convictions of its financial advisers.

In Germany, price and wage control is made effective by the strong-arm methods of the Gestapo.

In this country there will be an enforcement organization, the required personnel of which, it is estimated, will number 5,000.

To a considerable degree the success of the plan will depend on the co-operation of all citizens—wage-earners, employers, consumers.

Given a clear understanding of the necessity (Mr. King’s explanation was simple, easily understood) every Canadian should realize that such controls are intended to protect the welfare of the vast majority of his fellows. •

Successfully administered, the wage and price measure should mean the stabilization of the earned dollar. The value of savings, of the insurance policy to which a man has been contributing for years, instead of shrinking, should stay put. The danger of a postwar depression via tumbling prices and wages should be diminished.

Above all, our war effort should be made more effective; its cost, borne by every citizen, controlled.

Dislocations, some of them severe, may be expected. Numerous knotty problems will have to be ironed out.

But no dislocation we can think of would equal the disaster of a dollar blown to fragments by inflation—or of an impeded war effort.

%\/~E STRESS the necessity of keeping all TT members of the community well informed as to the reasons behind government policies.

The workings of the original wages-labor

policy (referred to as P.C. 7440) even now are not thoroughly understood by many workers. Some there are who actually believe that the Government is paying their cost-of-living bonuses, not their employers.

True, there are employers who fail to grasp the importance ol talking things over with their employees. On the other hand, the Government, the country’s war management, has done little or nothing to take labor into its confidence, convince it that it is a partner, arouse its enthusiasm and understanding for all-out war participation.

In case of the new and most drastic wage and price control measure, the Labor Supply Council and such labor leaders as Moore, Mosher and Charpentier were treated as an afterthought. That s no way to get labor enthused.

Again, the Government itself has done little to carry inspiration to the workers in our war plants.

Recently, when Maclean’s arranged to send Beverley Baxter on a cross-country speaking trip, it gladly co-operated with Ralph P. Bell, Director of Aircraft Production, and with plant managers, in getting Mr. Baxter (who readily agreed) to address gatherings of aircraft workers* He talked to many thousands of them in several important centres. The response was excellent

stimulating. There was never a thought that the speaker was putting over propaganda for any special interest. He merely demonstrated the vital interest all classes in a community have in putting their might behind the fighting forcesThe workers wanted to know. And it was the first time anybody had gone to tell them.

Informing the community is a continuous job. And no national effort can reach fullness unless that job is well done.

WALTER P. ZELLER, of Montreal, built a chain of successful stores; is recognized as a top-flight business organizer.

The Minister of National War Services enlisted him as an executive assistant. Job—to direct tourist activities.

Zeller went to Ottawa to serve without pay. without any expense allowances.

After three months he resigned.

He explained that he found it too hard to get any action.

There is pretty good ground for the suspicion that with all his experience in selling (incidentally, the tourist business is selling— selling

Canada) Mr. Zeller was stymied by one of those Official Minds with which even a Minister can’t cope.

Mr. Zeller isn’t the first “outsider” to be worn down.

It goes without saying that in the Ottawa Civil Service there are many men of great competence. In private business they could command much bigger salaries than the Government pays, but they prefer to devote their talent to the service of the country. They are big men. They believe in getting things done. They are quick to appreciate the value of experience in nonpolitical business affairs.

But there is another type of civil servant. There are a few lads in Ottawa whose main ambition in life seems to be that of competing for a job as chief of a Department of Impediments.

They consider the civil service to be a closed corporation. They flourish because of a too readily accepted belief that criticism of any permanent government employee is worse than blasphemy.

It might be a good thing for all capable civil servants as well as for the public interest were parliament to get right to the bottom of the Zeller and other similar cases.

Tragedy of a Small b

AS EXAMPLES of the importance of little things, the fly which stopped an express train by gumming up an axle oil-hole, the nail which dropped from a horse’s shoe and caused the loss of a battle, have nothing on the small b which ruined our October 15 issue.

In an article on Georgetown, the author had written, “Four Georgetown Barbers, whose ancestors helped found the community, uncle and three nephews, are officers in the Lome Scots.”

The saga oí the Barber family is almost the history of that part of Ontario. And what did

By a ghastly error—not a printer’s error, not a proofreader’s error, but, gadzooks, an editorial copy reader’s error—the capital B was reduced to lower case. Yes, “Four Georgetown barbers” is what we published.

The Barber family got a tremendous kick out of it all. Wonderful people, the Barbers.

But now do you see how important it is to be particular about little things? 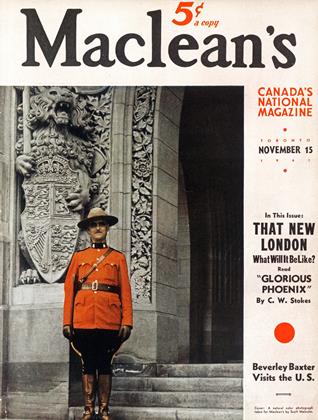