COME December and Christmas just ’round the corner, housekeepers are in for a stirring time. If the cake and pudding are not already on the shelves they’re on the conscience—and it seems that a good many are of uneasy mind. Unlike other years the Christmas baking has to be fitted in between your wartime activities, but the calendar warns you that you can’t put it off any longer.

These are some jottings from our morning mail: ‘‘Please send me the recipe for that Christmas cake you had in Maclean’s some time ago.” “I’d like an economical fruit cake with a fine expensive flavor.” “I’ve lost the recipe for Jellied Christmas Pudding and I’d like to serve it again.” “Please send me directions for making a nice mincemeat, without meat.”

So here they are, by request. And for good measure a few other recipes to suit the holiday season.

Cream the butter, add the sifted sugar gradually and continue creaming. Add the well-beaten eggs. Mix and sift together the dry ingredients, reserving one-quarter cupful of flour to dredge the fruit. Add these dry ingredients alternately with the sour milk to the first mixture, then stir in the citron, raisins and nuts which have been mixed with the quarter cupful of reserved flour. Add the vanilla and turn into a greased loaf pan. Bake in a moderate oven —300-325 deg. Fahr.—for thirty-five to forty minutes.

Combine the orange jelly powder, sugar and spices and add the boiling water. Stir until dissolved and set aside to cool. Cook the raisins in a very little water until tender; cool

and add with the dates, currants, nuts and spices to the slightly-stiffened gelatine mixture. Turn into a cold, wet mold or into individual molds and chill until set. Serve unmolded with whipped cream.

1 Pound of raisins Grated rind and juice of

three lemons Use spices to taste.

Mix the ingredients thoroughly and set away to ripen for several days before using.

Soak the gelatine in cold water for five minutes, add vinegar, lemon juice, boiling water, salt, sugar and onion juice. Stir until dissolved. Strain and cool. Arrange lettuce and pimiento in a wet or lightly-greased mold, pour the cooled mixture over this and chill. Serve unmolded on lettuce leaves with mayonnaise.

Boil the sugar and water together for five minutes. Add the cranberries and cook until tender (about five minutes). Cool thoroughly. Fold the stiffly beaten egg white into the cranberry sauce. Arrange alternate layers of sliced sponge cake and sauce in a pan, finishing with a layer of

cake. Place a weight on top and chill for six to eight hours. Unmold and garnish with the whipped cream. Six servings.

Grated rind of one orange

Put the cranberries through the food chopper and mix with one quarter cupful of sugar. Sift the remaining sugar, flour, baking powder and salt together, and add the nuts and orange rind. Beat the egg slightly and combine with the milk and melted butter. Combine with the dry ingredients and fold in the cranberries. Bake in a greased pan in a moderate oven—350 deg. Fahr. —about one hour. 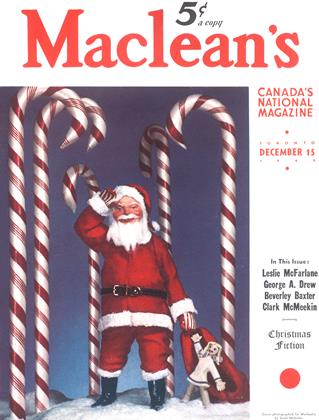