Can’t See Them—Muss has appointed a “Commander of the Fleet of the Seas.” What seas?—Windsor Star.

Easy On Shins—There’s a kind of bridge you can play without partners, but it takes most of the kick out of the game. —Saskatoon Star-Phoenix.

Easy Job—There are always plenty of opportunities for a trouble-maker but it is a lazy person’s job. Trouble-making is so easy. If you want something difficult, try peace making.—Rosetown (Sask.) Eagle.

Spin-Dizzy—The motor car has come a long way. The early tin Lizzies have culminated in the spin-dizzies.—Toronto Star.

Harder Task—Many of the world’s problems were solved long ago. What we’re seeking now is solutions for the solutions.—Halifax Chronicle.

Heavy Larceny—A man was recently charged with stealing over a ton of metal from a munitions factory. His plea that he did it in a moment of weakness was not accepted.—Toronto Labor Leader.

Easy on the Eats—Food rationing, undertaken for the purpose of building up a reserve, is making the English people healthier. It is a well-known fact that over-eating is the cause of many illnesses, and in this respect the war is likely to bring great benefit to the British Isles.— Chatham News.

Theatrical Note—An author who specializes in thrillers has written a musical comedy. Will the mystery of what the opening chorus is singing about be solved in the last act?—Montreal Star.

Cold But Safe—An American professor is investigating the origin of the Eskimo people. One theory is that they were just Europeans who had sense and got as far as they could out of the way.—Sherbrooke Record.

Competition—“The automobile and the railroad train should serve the public side by side,” says a Detroit automotive executive. Precisely. It’s when one tries to get across in front of the other that the trouble starts.—Windsor Star.

The Cards Tell You—The cost of learning that one cannot play poker is a luxury few can afford, while for a negligible sum one can discover that he can’t play bridge either.—Kingston Whig-Standard.

Cause and Effect?—The days of the old horse-and-buggy doctor are over, and we don’t see so many centenarians going around to oyster suppers the way we used to.—London Free Press.

Lucky Captives—Meantime those Italians captured by the Greeks are enjoying more freedom than they did under Mussolini.—Brandon Sun.

Cold Comfort—Homes in Paris are allowed only 100 pounds of coal a month, and the winter is cold enough at times. On such a meagre ration, Canadian householders would be faced with the impossibility of trying to make less than half a ton do them all winter.—Sudbury Star.

Invention Needed—Grand prize for anyone who can invent a new colored traffic light different to all the other electric light signs on the block.—Ashcroft Journal.

Intelligent Fighting—“Fighting is all right,” says an orator, “provided you do it intelligently.” Sure, but you can’t always find a guy who is smaller than yourself. —Northern Mail.

Safety First—An astronomer says that other planets, outside this galaxy, are speeding away from the earth at the rate of several thousand miles a minute. Who blames them?—Saskatoon Star-Phoenix.

Unique Discovery—An English visitor complains that our rooms are too hot. Next time there is a cold snap, many roomers would be glad to know the landlady’s address.—Toronto Star.

No Photo Finish—Science has made such long strides that photographs are used to decide the winning of football games. But imagination fails to conjure up a vision of the war’s ending with Hitler demanding that a picture be taken of the finish.—Toronto Globe and Mail.

No Fun For Anyone—David Niven, who managed to hold his place in London society during his long service in Hollywood, had a bad time of it when he went down and joined up.

The men didn’t like being given orders by an ex-Hollywood star.

After several days of their glowers and apathy, Capt. Niven barked:

“If you men think I would rather be here drilling you than in Hollywood making film love to Ginger Rogers—you’re nuts!”—Calgary Herald.

Reaping His Reward—A tourist in Ireland came upon two men rolling in the road. The man on top was pummelling the other within an inch of his life. The traveller looked on for a moment in silence, then intervened.

“I say, it’s an infernal shame to strike a man when he’s down.”

“Faith, if yez knew all the throuble I had gettin’ him down, yez wouldn’t be talkin’ like that,” came the intermittent reply.—Owen Sound Sun-Times.

“Have you a picture of the Fuehrer hanging at home?”

“Well, have you a portrait of Marshal Goering?”

“Well, at least you have a photo of Dr. Goebbels?”

“Excuse me, sir. My father says he will make up for this, when he gets out of the concentration camp, by hanging all three of them.”—Parade.

Forgot His Spectacles—The workman had placed a ladder against the clock-tower in the public square, and was about to clean the clock face.

“Ah!” said an old lady. “Are you going to do something to the clock?”

Important Announcement—“Has this man got an account here?” asked the caller at the bank in the wild and woolly West.

“Then why did you return his cheque to me marked ‘No funds’? ”

“Oh,” replied the manager, “that doesn’t mean this man has no funds. It means the bank has no funds.”—Montreal Herald.

Cause For Alarm—Playwright: “Well, what did you think of my play?”

Producer: “I would make one suggestion.”

Playwright: “What is that?”

Producer: “Make the villain shoot himself instead of poison himself in the third act.”

Stale News—“I’m afraid I shall have to summon you, miss. You were doing forty miles an hour,” said the policeman.

“Oh, you are too late, officer,” simpered the damsel. “Another policeman told me that about three miles back.”—Toronto Globe and Mail.

Financially Embarrassed—It was about ten o’clock at night, and the two occupants of the police car patrolling the rain-washed, deserted streets were rather fed up. “Nothing coming through?” the driver asked his fellow policeman, who sat in the back seat with the wireless earphones over his head.

“No—wait a second, though. Here’s a message from headquarters.” He began writing.

“Well, what is it?” asked the driver eagerly.

“Sergeant says to bring in an extra portion of fish and chips when we go back for supper. He’s got a visitor at the station.”—Saint John Telegraph-Journal.

Worn But Good—A Scotsman rang up a doctor in a state of great agitation. “Come at once,” he cried, “my baby has swallowed a dime!”

“How old is it?” asked the doctor.

Bashful—Charlie was the most bashful lad in the village. Naturally the family were astonished when he told them one evening he was going courting. After spending an hour or so getting ready, he set out. Half an hour later he returned; looking very pleased with himself.

“All right,” replied Charlie with a grin.

“Ay, I did an’ all. An’ if Oi hadn't ducked down behind the hedge, she’d have seen Oi, too.”—Teeswater News. 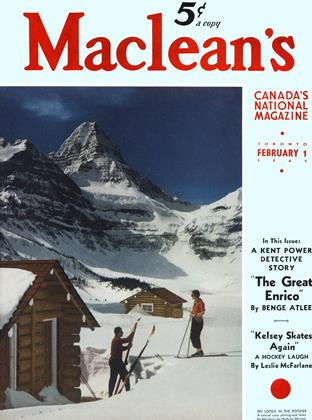