SINCE Maclean's published the article which resulted in the appointment of a Royal Commission to investigate the Bren gun contract, this magazine has been the object of a great deal of hysterical political abuse. Therefore, it was not without interest that we learned that the same Government which so heatedly defended the contract and the manner in which it was awarded had last October cancelled the contract, making the cancellation retroactive to the date on which it was signed.

Apart from the methods employed in letting the contract, its cancellation indicates that the Government by actual experience found that Col. George A. Drew’s criticisms of the unusual terms were sound criticisms. Had the contract been as good as its defenders said it was, there would have been no reason to cancel it back to the date of signing.

Two new contracts with the Inglis Company replace that cancelled. At this time, not knowing the details of the new contracts, not knowing what payments, if any, are involved in the cancellation of the old contract, we cannot yet appraise the re-made deal. From information made public it appears that the basis of cost plus a percentage has been eliminated, and that a number of items of management and overhead cost, originally calculated as part of the cost of the guns (and on which the Inglis Company would receive an additional ten per cent) are now to be paid out of the specific management fee provided for. More adequate control of costs appears to have been secured, and Government spokesmen have declared that by the revised terms a considerable saving will be effected.

Among the questions which will be asked in the House is why, when information was sought by members last November, the Government concealed the fact that the contract had been cancelled and replaced.

Tardy as the cancellation was, Maclean's is quite ready to give credit to the Department of Munitions and Supply (and we assume that it was the Department of Munitions and Supply) for whatever distance it has gone in revising what, from the point of view of public interest, was an unsound business deal arrived at under grossly unsatisfactory circumstances.

While Mr. Justice Davis’ report on the investigation referred to Parliament the responsibility of taking action in connection with the manner in which the contract was awarded—the issue was bogged in parliamentary enquiry by extreme party tactics—the Commissioner’s report, to an unprejudiced reader, left no doubt as to the judge’s conclusions about the system of Defense Department purchasing at that time. Justice Davis bluntly recommended that the letting of munitions contracts be removed from the Department and put under a more competent organization. From that recommendation there developed, in turn, the Defense Purchasing Board, the War Supply Board, and the Department cf Munitions and Supply. And, while all of the Davis recommendations have not been followed, a great deal of progress has been made toward the establishment of a more businesslike and economical system of defense purchasing in this country.

Any satisfaction Maclean's derives will be from the fact that establishment of sounder buying practices saves public money which can be put to work producing more and more war supplies.

IN A recent issue, Maclean’s published an article dealing with the possible outcome of the conference of provincial premiers called to discuss the Sirois Report.

The heading was “They Marched Up the Hill,” and the subhead, accompanying photographs of the premiers, read: “ ‘The King’s Men’ have marched up Capital Hill to debate the Sirois Report. Question: Will they put Canada together again?”

One reader, a lady, wrote in to say that while she made a point of sending her copies of Maclean's to friends in England, she certainly wasn’t going to send that issue because the subhead might create the impression that there was lack of unity in Canada!

We wonder what she thinks about the newspaper headlines proclaiming the collapse of the Ottawa conference.

So far as the Sirois Report itself is concerned, there was room for differences of opinion concerning its recommendations. But at least when nine provincial premiers and a number of their cabinet ministers met with the Dominion premier and his ministers there was an excellent opportunity for them to discuss calmly the problems of the nation as a whole, problems related to our war effort, and to suggest alternatives for the Sirois recommendations they disagreed with. But no. Premiers Hepburn, Aberhart and Pattullo walked out like petulant schoolboys. They had no constructive suggestions to make. They offered no rallying thought. And in the case of Mr. Hepburn, what was no doubt intended as bluntness of speech is generally regarded as being crudeness.

We have heard it said that had Mr. King shown vigorous leadership at the outset, the conference might have had different results; that a Churchill or a Roosevelt could have swung the conference behind him. Maybe so. Maybe not. But certainly in his keynote speech the Prime Minister made it clear that he was halfhearted about the whole thing.

It isn’t too late yet for the provincial premiers to discuss with the Dominion Government WHAT CAN BE DONE to make the nation’s war effort more effective, and we hope such a demonstration of unity will come about, whether the Sirois Report figures in it or not. As things stand, the only result of the conference has been to give the people of this country a basis of measurement against which to place the respective statures of their leaders.

The British committee was appointed in December, 1939, to examine current expenditures on defense services and other services directly connected with the war, and to report what economies might be effected, consistent with the execution of the Government’s war policy.

The Committee consists of twenty-eight members representing various political parties. It has power to send for persons, papers and records, to sit notwithstanding any adjournment of the House, and to adjourn from place to place.

It has appointed seven sub-committees to enquire into expenditures for Army, Navy, Air, Supply, Home Defense services, and trade, agriculture and economic warfare.

In its report on organization, the Select Committee said: “The first and most obvious line of enquiry is into the prevention of waste in any form; secondly, the possible reduction of expenditure to secure a given policy; and, thirdly, the general problem of whether the available resources are being used and organized in the wisest manner to secure the policy aimed at.”

In its second report, the Committee says: “In examining current expenditures, they conceive it to be more their duty to prevent or check waste before it occurs than to conduct enquiries into past events.” At the same time, the Committee does not overlook past waste. In one report it flays the wasting of a vast sum of money on an airdrome site which, after eight months of costly work, had to be abandoned. And it doesn’t mince matters when dealing with other blunders.

Up to November last, the Committee had submitted fourteen reports. They cost from a penny to a shilling a copy, according to size. Incidentally, each report carries a line recording the Stationery Office’s estimate of the cost of printing it, so that even that item can be checked.

It would be a good thing were all members of the Canadian committee (and all members of Parliament for that matter) supplied with copies of these reports. They are excellent models. 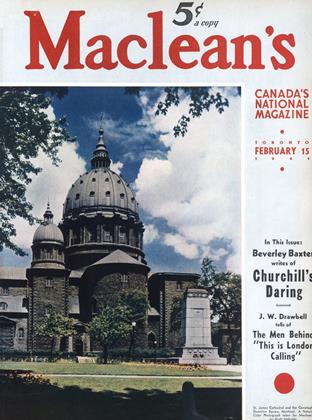