Rubbing a frostbite with snow is not good treatment, as frozen tissues are bruised and torn, and gangrene is very apt to result. Gently cover the frozen part with the hand or other body surface until the part has thawed and circulation is re-established. If a hand is frozen, hold it next to the skin in the armpit or between the thighs. The frozen part may be thawed very gradually in cold water or cool air, or if covered with extra clothing.

The power and pride of Sparta, province of ancient Greece was, above all, in its army. Every citizen was trained for war, and was liable to military service from his twentieth to his sixtieth year. Around the army was formed the moral code: to be good was to be strong and brave. The mother’s farewell to her soldier son was, “Return with your shield, or on it.” Soldiers were warned to consider the health and character of those whom they thought of marrying. Archidamus, king of Sparta, was fined for marrying a diminutive wife.

The beauty parade did not originate at the American beaches. Seven hundred years ago there was an annual competitive examination in beauty held in the dominions of Kublai Khan. They set a value on the comparative beauty of the girls by surveying the “points” of each girl in succession—her hair, her complexion, her eyebrows, mouth, lips and the proportion of her limbs. According to the sum of the beauties or defects of each, the girls were set down as being worth 24 to 40 carats. No candidate passed who did not attain 24 marks.

Ramsey Island, near the Welsh coast, is a place of tumbled rocks, violent tide races and heather-covered hills. As long ago as 1326 the land was very fertile, and it is recorded that the Bishop of St. David’s

possessed “in the island of Ramsey two carucates of land containing 100 acres, and each acre is worth 2d. a year, and there can be kept there 10 horses, 100 head of great cattle, and 500 sheep, and the pasture for each head of great cattle is worth 2d., and for every 10 sheep 2d., and they say that the Bishop is able to take thence 100 loads of rushes and heath; each load is worth 3d., and 500 rabbits for cooking, and they are worth four fifths of a penny each. Total 75 shillings. The ferry to and from the island, both for carrying beasts and for everything else at the accustomed fee, the pay at Christmas, two fowls.”

The term “Christian” was first used at Antioch, Syria. The word “Bible” was derived from Byblos, Phoenician port before 3000 B.C., through paper exported from there.

In fly fishing it is important not to wear a belt when long waders are used. If you are swept away or fall into deep water with a belt outside the waders, the belt will prevent the waders from filling with water, your feet will float up and you will find it impossible to get your legs down again. If in trouble in deep water, the first thing to do is to pull your knees up to your chin and let the waders fill. The water inside the waders is no handicap to you while you are in the water.

Many years ago the sails of ships were colored, a black sail being everywhere a sign of mourning. A purple sail was generally the badge of an admiral or monarch. On vessels employed as scouts in time of war, the sails and ropes were dyed the color of sea water, so as to keep them out of sight. Frequently a patchwork of colors was produced on the sails, as shown in the Egyptian ship of about 600 B.C. in the British Museum. 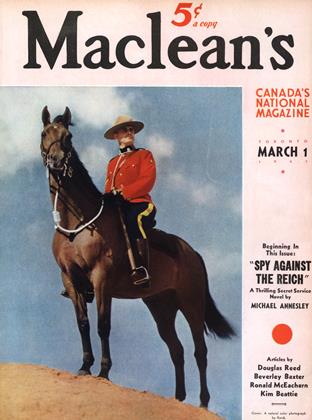