Not So Easy-—Our estimate of woman’s intelligence increases when we glance at the instructions for knitting socks.—Brandon Sun.

Screwballs—Organization known as “Screwballs of America” has been incorporated for people who “do something a little off-centre.” That lets just about everybody in—and how about a Canadian branch?—Windsor Star.

Use Your Head—They took seven stitches in the head of a Saskatoon hockey player because he failed to use it.—Saskatoon Star-Phoenix.

Return That Return—1941 may have its ups and downs, but let’s hope the greater part of them are included in that return which has to be filed by April 30. ---Belleville Intelligencer.

Mechanical Horses — Mechanized cavalry units, when captured by the enemy, have this advantage over the old kind: The horse understands only one

language. The machine will answer in anv —The Pas Northern Mail.

Stamp Him Out—When you lick your war saving stamps you help to lick Hitler. —Guelph Mercury.

Fish and Skates—An Ontario game warden on skates, checking the licenses of anglers operating through holes in Lake Erie ice, provides a new and striking picture of Canadian winter activities. The catch is said to be good this season and the fish in excellent condition.—Toronto Globe and. Mail.

Paint the Snow—We have reread some of those fine old snow poems, and opine our drifts should be painted white or sent to the cleaners.—Brandon Sun.

Use Those Feet—One of the best hints on reducing: How often have you seen a fat mail carrier?—Regina Leuder-Posl.

The Nosy Things!—Naturally we are interested in our neighbors’ affairs, but isn’t it annoying that they should be so curious about ours?—Niagara Falls Review.

Not So Funny—“Funny money” is what some people call unsound currency theories. It is not a bit funny, however, for those who have practiced thrift and dread an era of stage money.—Sudbury Star.

Happy Ending?—Woman on the Pacific Coast stole to get her husband out of jail. He isn’t out—but they are together now.—London Free Press.

Nowadays—As they say on the Continent, it’s a wise child who knows his own Fatherland —Montreal Star.

Handicapped—A London concert pianist who sleeps under his grand piano during air raids is worried about an old friend, a virtuoso on the flute.—Sudbury Star.

Watch For the Warning—The Nazis indignantly deny the ugly story that they intend to use poison gas. At least, they won’t use it without announcing that the British were about to use it first.—Lindsay Post.

Practice Makes Perfect—Fewer prisoners were taken in the latter stages of the Libyan drive than in the first flush of the attack—the Italians, with a lot of experience at it, had learned to run faster. —Amherst Neics.

Good Experience—Military trainees are having the novel experience of learning to take orders before they get married. —Calgary Albertan.

Up And Not Doing—An exchange remarks that “It seems the more things a loafer should be doing the happier he is.” This is natural enough, for he could not be loafing unless there was something he should be doing.—Quebec Chronicle-Telegraph.

Spring in Prince Rupert—It’ll soon be garden time if the snow is not too deep, but it’ll be some time before the flies have to be shown swat’s swat.—Prince Rupert News.

“Thanks,” said Paddy. “I was always behind before, but now I am first at last.” —Port Arthur News-Chronicle.

Cold Country—A woman about to leave London for New Zealand was advised to provide herself with very warm clothing.

‘Oh, it’s awfully cold out there, don’t you know!” replied the adviser. “It’s the place where all the frozen mutton comes from !”—Palmerston Observer.

At the Camp—Sergeant: “Did you

sleep well on your cot? I’m afraid it was a little hard and uneven but—”

Conscript: “It was all right, sir. I got up now and then during the night and rested a little, you know.”—Saskatoon SlarPhoenix.

Choir Music—Two ladies were sitting at an open window.

One was listening to a church choir practicing across the way.

The other was listening to the noise of the crickets.

The first one said: “How loudly they sing tonight!”

And the other one said: “Yes, and they tell me they do it with their hind legs.” —Welland-Port Colbome Tribune.

Dangerous Food—He was enlarging on the danger of modern foods, and with a dramatic gesture he pointed an emphatic finger at a rather harassed looking and inoffensive listener and demanded:

“What is it? We all eat it some time or other, yet’s it’s the worst thing in the world for us. What is it, I say? Do you know?”

It appeared that the little man did know, for he replied in a husky whisper: “Wedding cake !”—London Free Press.

Fair Enough—“I suppose,” said a lady to a tram-car conductor, “if I pay the fare for my dog he will be treated the same as other passengers, and be allowed to occupy a seat?”

“Of course, madam,” the conductor replied politely. “He will be treated the same as other passengers and can occupy a seat, provided he does not put his feet on it !”—Public Opinion.

Not a Musician—“And to whom does this lovely violin belong?” asked the visitor of the cotter’s wife.

“Dear, dear,” went on the visitor, “but I didn’t know that Mr. Gibson could play the violin.”

A Weighty Reply—In a crowded street car. a thin lady was discomfited by the pressure of an extremely fat lady who sat next to her. Turning to her other neighbor, the thin lady remarked: “They really should charge by weights.”

they couldn’t afford to stop for some people.” — New Westminster BritishColumbian.

Refined Torture—Mrs. Simms. “My dear, never marry anyone connected with the editorial office of a magazine or newspaper. •

Mrs. Simms: “I married one and every night he brings home a big bundle of papers from all over the country. I nearly go crazy looking at the bargains advertised in stores hundreds of miles away.”—Moose Jaw TimesHerald.

Homelike—It was a very tense scene in the film. The audience sat enthralled. Suddenly the hero slapped the heroine in the face.

In the stunned silence which followed, a little voice piped up: “Mummy, why doesn’t she hit him back like you do?” —Fredericton Gleaner.

Bright Lights—-“The sun,” cried the lecturer grandiloquently, “shines ten million times as brightly as any lamp made by man.”

“Say, mister,” enquired a voice from the rear, “did you ever do any night driving?’’—Quebec Chronicle-Telegraph.

Toasted—“I say, my dear,” said an ex-soldier the morning after the regimental reunion, “I seem to have got an enormous blister on my tongue.”

“What do you expect?” replied his wife. “You would insist on drinking my health out of your hot-water bottle last night.” —Galt Reporter. 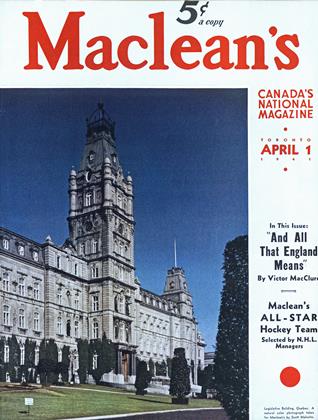