EVERY HOLIDAY season has its own special dish and some particular flavor is associated with our celebration of each important date. Easter claims ham, served whole in a crusty brown coat or brought to the table in thick, rosy slices which harmonize with the springtime color theme and appeal to springtime appetites.

True, there’s nothing quite so regal as a whole baked ham sitting proudly on its platter and if your dinner party is any size you can’t do better than to have one. Today the preparation is no job at all as the botheisome preliminaries are eliminated and you have merely to attend to the final cooking. Directions come with it too —so you can’t go wrong. Not very long ago it had to be scrubbed, soaked for hours and parboiled before baking—a good day’s work that can now be accomplished in a short time with even better results.

But suppose there are only a few to sit down to your Easter dinner. Then ham slices fill the bill for you providing a handsome dish and doing away with the problem of left-overs; there won’t be any. Good as this meat is on its own it can be given an extra-special flavor by cooking or serving with harmonizing accompaniments, sweet or savory7. Ham and banana for instance, is a novel and appetizing flavor blend, ham and mustard has a pleasant zip about it, ham with fruit juice is a popular idea and other combinations are equally successful. So variety is no problem either, for ham gets along well with many other foods and flavors. Try these and see if you don’t find a dish worthy of your Easter dinner.

Justas ham an’ eggs is a favorite breakfast dish, ham an’ what have you are the makings of many delicious supper dishes. Here’s a soufflé, an à la king mixture, a scallop, patties, a cereal and ham combination and others to prove the point. There are dishes among them for family meals and party menus, so if there is any ham left over you won’t regret it. Even the ham bone may be used to give flavor to soups and stews.

With Banana Scallops—Have ham slices cut one-half-inch thick, brown lightly on both sides in a hot pan. Place in a baking dish and bake in a moderate oven—350 deg. Fahr.—for three-quarters of an hour. Serve with hot Banana Scallops. To make the Scallops: Cut oneinch-thick slices from a firm banana. Dip in slightly beaten egg, then roll in cornflake or bread crumbs. Cook in hot fat for from one-and-a-half to two minutes or until a golden brown and tender.

With Mustard—Select a slice of boned cured ham, one-half-inch thick. Remove the rind and excess fat and cut the fat into small pieces. Rub both sides of the slice with prepared mustard and sprinkle with the chopped fat. Place in a baking dish and cook in a moderately hot oven—375400 deg. Fahr.—until tender—forty-five to sixty minutes.

With Savory Topping—Remove the fat from two pounds of sliced ham—half inch slices—almost to the lean and chop it finely. Mix with two teaspoonfuls of chopped parsley and two tablespoonfuls of minced onion. Place the ham in a baking dish and spread with the onion-parsley mixture. Sprinkle with the juice of one lemon and bake in a moderate oven—350 deg. Fahr.—for thirty-five to forty minutes.

With Cloves and Corn Syrup—

Brown a three-quarter inch thick slice of ham on both sides in a hot pan. Place in a baking dish. Cover the top with corn syrup, sprinkle with bread crumbs and dot with cloves. Bake in a moderately hot oven—375 - 400 deg. Fahr.—for about three-quarters of an hour.

With Pineapple—Have ham slices cut one inch thick. Brown lightly on both sides in a hot pan. Place in a baking dish and cover with drained crushed pineapple. Pour the pineapple juice around the ham, cover and bake in a moderate oven—350 deg. Fahr.—until the ham is tender, about one and one-half hours. Or, spread the browned slice with mustard, sprinkle with brown sugar, and pour around it the juice from a can of sliced pineapple. Bake in a moderate oven— 350 deg. Fahr.—for one hour. Remove from the oven, cover with the pineapple slices and bake for one-half hour longer.

With Fruit Juice—Brown a one-inchthick slice of ham on both sides. Place in a baking dish, add a few cloves and pour fruit juice around it. Bake in a moderate oven—350 deg. Fahr.—about one-and-ahalf hours. Try apple, peach, or grape juice, cider or ginger ale.

Baked In Milk—Rub the browned ham slice with mustard and bake in a little milk.

Combine the ham, potatoes, bread crumbs, parsley and onion and add enough tomato juice to make a mixture thât will hold together well. Spread this mixture in the bottom of a baking dish and heat in a moderate oven. On the top make indentations with the back of a spoon and break the eggs into them carefully. Sprinkle with salt and return to the oven until the eggs are set. Six servings.

1 Can of condensed cream of mushroom soup 54 Cupful of milk 1 Cupful of cooked ham, cut in 54-inch cubes

Empty the can of soup into a saucepan. Stir until it becomes creamy, then slowly add the half cupful of milk. When the mixture is hot add the cupful of cubed ham and the quarter cupful of pimiento, which has been cut in strips. Beat the egg yolk and add some of the hot mixture to it, then add this to the first mixture. Four servings.

Add the butter and the mustard to the ground ham and mix well. Sift together the fleur, baking powder and salt, add the shortening and cut in with a fork. Add the liquid to make a soft dough. Turn out on a floured board and toss lightly until the outside looks smooth. Roll out one-quarter-inch thick in a sheet twelve inches long and ten inches wide; spread this with the ham mixture. Roll up lengthwise like a jelly roll and cut into slices one and one-half inches thick. Flatten each slice down to one inch and place on greased pan, cut side flat. Bake in a hot oven—475 deg. Fahr.—about fourteen minutes. Makes eight rolls.

Melt the butter, add the flour and stir until well blended. Add the milk slowly,

stirring constantly until thickened. Bring to a boil and boil two minutes. Add the cheese and stir until the cheese has melted.

Place a layer of left-over ham, diced, on the bottom of a baking dish. Cover with a thin layer of sliced raw potato, then a layer of sliced onion. Alternate until the dish is filled, having a layer of ham on the top. 'Season with pepper, paprika, mace and one quarter teaspoonful each of sage, marjoram and thyme. Cover the whole with milk, to which one tablespoonful of flour for each cupful of milk has been added. Bake in a moderate oven—375 deg. Fahr.—for about forty-five minutes.

Melt the butter in the top part of a double boiler, add the flout and stir until well blended. Add the milk, gradually, stirring constantly until thickened. Add the salt and pepper. Remove from the heat. Stir in the cheese and add slowly to the well-beaten egg yelks, mixing well. Cool slightly and fold in the ground ham and the stiffly beaten egg whites. Pour into a greased baking dish and bake in a moderate oven—325 deg. Fahr.—for fifty to sixty minutes. Six servings.

Scald the milk in the top part of a double boiler. Add the tapioca to the milk and cook until clear and thickened, about fifteen minutes, stirring frequently. Add the onion, ham and paisley, blend well and chill. Shape into patties. Dip into the egg mixture, then roll in crumbs. Fry in a pan containing hot fat one-quarter-ofan-inch deep. Turn the patties to brown both sides. Drain and serve hot. Makes six patties.

2 Cupfuls of cooked cream of wheat

1 Teaspoonful of grated onion Salt, pepper and paprika to

Place one half of the cereal in a greased baking dish and cover with the diced ham which has been mixed with the green pepper, onion and seasonings. Cover with the remainder of the cereal and top with the buttered bread crumbs. Bake in a moderate oven—375 deg. Fahr.—for about forty-five minutes. Six servings.

Chop or grind the ham, eggs and pickle together and mix with the mustard and salad dressing. Form the mixture into round or egg-shaped balls, roll in the grated cheese and then in the chopped parsley. Chill thoroughly. Makes eight balls.

A Budget of New Recipes

Wash the tongue thoroughly in cold water. Cover with boiling water, bring slowly to the boiling point and simmer until tender—from two to five hours, depending on the size. After it has cooked for one hour, add salt—one teaspoonful to each quart of water. Additions such as bay leaf, celery leaves, a few peppercorns, a little minced onion will improve the flavor if put into the water during the cooking. When the tongue is tender, let it cool in the liquor, then remove the skin and any small bones and roots. Simmer together for twenty minutes the tomato juice, salt, pepper, cloves and onion. Strain and add the gelatine which has been softened in the cold water. Stir until the gelatine is dissolved, and pour a thin layer of the liquid into a cold wet mold. When it is almost set, add diced cooked tongue and pour in the remainder of the jelly. Chill and serve.

1 Cupful of cooked lima or

To the beaten egg yolks add the corn, beans, milk, fat, seasonings and parsley and mix well. Place one half of this mixture in the bottom of a casserole, add the chicken and cover with the remaining succotash mixture. Sprinkle the top with the buttered crumbs and bake in a moderate oven 350 deg. Fahr, until piping hot (about thirty minutes). Six to eight servings.

The Rest of the Menu—Gherkins, Radishes, Rolled Asparagus Sandwiches,

Parboil the celery and onion for a few minutes in a small amount of salted water. Drain and combine with the flaked salmon, the peas, the chopped hardcooked egg and the white sauce. Add the minced parsley, the paprika, and salt and pepper to taste. Coat the bottom and sides of buttered individual baking dishes with buttered crumbs and fill with the creamed mixture. Sprinkle more buttered crumbs over the top and place in a hot oven, 425 — 450 deg. Fahr, until nicely browned—about ten to fifteen minutes. 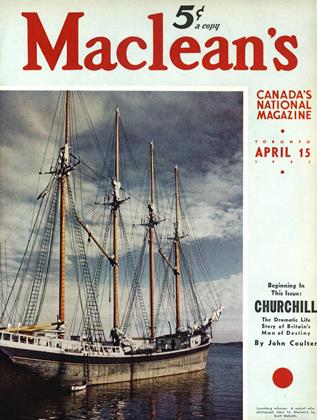