BETWEEN this and the previous issue of Maclean's, Prime Minister Mackenzie King has given parliament an effective compari-

son of Canada’s war effort, and of our aid to Britain, with what an equal effort by the United States would mean.

“For the benefit of those, either in this or in other countries, who have not a due appreciation of the magnitude of Canada’s war effort, or who may have been misled by comparisons between our war effort and what has been said concerning the lease-lend program of the United States, I am going to translate a few of these figures into comparable American terms.

“In providing the Canadian dollars necessary to meet the deficit in Britain’s balance of payments with Canada next year, the Canadian people will be rendering financial assistance to Britain which would be equivalent, in comparable American terms, to something over fifteen billion dollars a year.” (More than twice the amount voted under the LendLease Bill.)

Apart from the financial side, the Prime Minister stated that in terms of human lives the quarter of a million Canadians on active service would, in terms of the U.S. population, be equivalent to an armed strength in the forces of that country of more than two and threequarter million men — this without taking account of a reserve army for home defense.

No doubt Mr. King, as Prime Minister of a belligerent country, considered it sound diplomacy to wait until the United States Congress had finished debating the Lend-Lease Bill before making what was a much needed statement.

The unfortunate thing is that since the war began the people of the United States have been given little opportunity to learn the facts of this Dominion’s war effort. Lack of such information has enabled anti-British agents to spread propaganda about Canada which has left a wrong impression in many quarters.

Nor was the situation helped when Leighton McCarthy, our new Minister to Washington, on

^he occasion of his first meeting with the United States press correspondents, had to parry questions concerning the Canadian war effort.

Still more unfortunate was the fact that Mr. King’s statement when it was made received scanty attention in the United States press. Mr. McCarthy’s second interview with the correspondents, given after Mr. King spoke, achieved better results than did the first one, but it is regrettable that the minister should have been placed in the position of having to overtake a first impression.

There is an obvious need for an improved liaison in the matter of our public relations in the United States.

Ottawa has shrunk from anything that might be construed as propaganda. But the position of the United States now is such that factual information about Canada’s part in the war would be welcomed. Therefore the report that the Dominion will appoint an outstanding newspaperman to establish a Canadian information service in the United States, and that he might act as press attache in our legation in Washington, late as such action may be, is welcome news.

ÍN CONNECTION with the continuing toll of human life taken in motor accidents we have frequently pointed to the faults of drivers. Here is a quiz for pedestrians.

1. Did you ever dash out of your home or place of business and cross the street then and there without going to a corner?

2. Do you ever start across the street on the stop or caution light?

3. Do you ever walk on the highway on the right hand side with your back toward traffic?

4. Do you ever jump off a street car at the rear, stroll around the back end and cross the street?

5. Do you ever walk across the street on a wet day with your head buried under an umbrella?

6. Do you fail to judge with any degree of accuracy the speed of an approaching car as you start to cross?

Remember that a pedestrian takes one step and advances one yard; an automobile driven at thirty miles an hour advances nine yards in that time.

To Finish the Job

AS THIS issue of Maclean's goes to press, ji\. total war has spread to the Balkans.

German armies are attacking Jugoslavia and Greece, bombs are raining on open cities, and British troops are fighting hard in strange valleys and rough mountain passes.

What the outcome will be, no man can foretell. That it will affect the whole course of the war, and even the course of human history, is obvious.

The fact that a well-equipped British army was on the spot, ready for the onslaught, while at that moment the Union Jack was being hoisted in Addis Ababa, is one more tribute to the amazingly widespread organization of the Empire and the power of the Royal Navy.

Similarly, the repercussions from the Balkan front will be felt in every part of that Empire. They will call for even greater acceleration of Canada’s productive effort. That means, in turn, still greater effort on the part of every individual in this country.

Terrific as they are, our war costs will mount. That the coming budget will bring still higher taxation goes without saying. But that will not be enough to carry the burden. Increased voluutary contributions from all citizens will be asked for. Without doubt, and with whole heart, they will be forthcoming.

Nearly two million Canadians have pledged themselves to buy War Savings Certificates, to lend a part of their savings to the nation. That is a splendid response. There are others yet to be pledged. This year, expanding war industry will fatten the pay envelopes of many thousands of men and woman who, up to now, have had little opportunity for saving. They too must be convinced of the absolute necessity of putting the new-found opportunity to work for their own security.

The dollars you lend are helping to hold the line which defends Canada from sacrifices of that magnitude.

More than that, War Savings are an investment, insurance for the individual in the postwar period—stored spending power which may be turned to good account when the day comes for war industries to be shut down.

Lend—and help to finish the job. 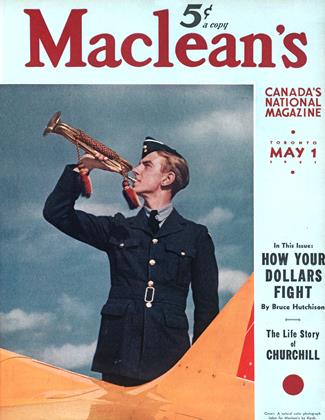