THE SAME degree of temperature in our food would be about as monotonous as identical flavors, textures and color effects. We like a bit of variety in all these respects and our idea of a good meal is a well planned combination of bland and piquant, firm and “squashy,” pastel and brilliant, hot and cold.

Besides providing agreeable contrast to the hotness of the main course, cold desserts offer convenience to the cook and diversity to the menu. They can be prepared early and served late and the list of appetizing possibilities is as long as your arm. In their more nutritious forms they supplement the light dinner while simple or dainty versions taper off the hearty one.

Fruit—A top notcher for its fine flavor and refreshing qualities. Needs a mere minimum of preparation—and canned fruit none at all. For a grand dessert serve it au naturel—a succession of delicious flavors as the seasons come and go. Or use the different varieties as starting points for many dishes and vary the service in a hundred and one ways, all good.

Jellied Desserts—Decorative, shimmering molds—individual or family size— which look appetizing and taste more so. They may be simple and economical or rich and luscious according to the ingredients that go into them. You can have them clear or full of fruit, plain, or whipped to an airy lightness, delicately tinted or as colorful as you please. The source of a world of flavors imprisoned for end-of-the-meal enjoyment.

Start them in the cool of the morning, or even the day before and your refrigerator will do the rest. When it comes serving time, you’ve nothing to do but upend the mold.

Frozen Desserts—Suitable for simple "family” meals or elaborate enough for a banquet. One of the sure-fire hits and one of the easiest, either plain or dressed up with sauce, fruit or other addition. Economical too, considering its nourishing qualities, satisfying flavor and refreshment value. You can buy it ready to serve or make your own and give it innumerable variations—ice ci earns, sherbets, and other ices of many different flavors. Their coolness will get a warm reception at the table.

Milk Puddings—Sustenance in good old-fashioned, still-popular form. Appropriate to any season, economical and downright delicious when well cooked, and cleverly seasoned. Can you think of anything better than a rich rice pudding, a velvety custard or a smooth creamy blancmange? Their ease of preparation is another advantage in hot weather meals, and their simplicity makes them suitable for children as well as the rest of the family.

Pastry—Shell and filling are equally important and the one should be worthy of the other.

A roll of pastry dough in the refrigerator puts you one jump ahead with the summer dessert problem. Bake as required. Then, to share honors with your light, tender, melt-in-the-mouth crust, use in their turn an endless variety of textures and flavors— creams, custards, sjxmges. gelatine chiffons, smooth-cooked mixtures, jellied-fruit fillings and even ice cream. Fruit or fruit combinations are all-season favorites for pies and tarts.

Cake—An accompaniment to fruit, jellied molds, and frozen dainties or a dessert on its own hook. It may be light and dainty, dark and rich, baked in loaf or layer and served with or without a

filling and frosting. Upside-down varieties turn plain cake into something quite special, providing their own adornment. Bake your cake in a ring mold sometimes, turn it out and fill with ice cream or a whipped cream and crushed fruit alliance, and there’s a dessert masterpiece! Cup cakes are another good bet.

Combine the cocoa, cornstarch, sugar and salt in a saucepan and mix well. Add

the boiling water gradually and cook stirring constantly until smooth and thick. Stir in the butter, and the flavoring. Let cool slightly then fold in the stiffly beaten white. Pour into a baked pie shell and top with a meringue made by folding the two tablespoonfuls of sugar into the two stiffly beaten whites. Brown lightly in a slow oven—275 deg. Fahr.—Six servings.

Combine the sugar and water and boil to the soft ball stage—230-234 deg. Fahr. —Add the pectin and cook one minute longer. Remove from the heat. Combine the fruit juices, heat again, then add slowly to the syrup. Add the coloring and let cool. Pour into the tray of a mechanical

Boil the sugar and pineapple juice together for five minutes, add the com syrup, mix well, and then add the mint. Cool slowly (to get the full flavor from the mint) strain and add the lemon juice and crushed pineapple. Fold in the stiffly beaten egg whites to which two tablespoonfuls of sugar have been added. Color a pale green. Freeze in an ice-cream freezer or turn into the tray of a mechanical

refrigerator and let the mixture partially freeze. When half frozen beat well and complete the freezing. Six to eight servings.

To the scalded milk add the sugar and salt, and then pour this mixture slowly over the slightly beaten eggs, stirring constantly. Add the cottage cheese which has been pressed through a sieve and stir in the flavoring. Pour into a greased baking dish, set in a pan of hot water and bake in a moderate oven—350 deg. Fahr. —for about one-half hour or until firm. Chill and serve. Six servings.

1 Cupful of syrup from canned pears

Soak the half tablespoonful of gelatine in a quarter cupful of the cold pear juice for about five minutes. Heat the remainder of the pear juice, the lèmon juice and the chopped cherries to the boiling point, add to the gelatine and stir until dissolved. Place the pear halves in a serving dish, cover with the gelatine mixture and chill until firm. Five servings.

Dissolve the jelly powder in the boiling water. Add the cold water and let stand until it starts to thicken. Beat until light and foamy, add.the applesauce and beat again. Let set until firm. Unmold and serve with whipped cream. Garnish with crushed candy or chocolate shot. Five to six servings.

Soften the gelatine in the cold water for five minutes, add the boiling water and stir until dissolved. To prepare the fruit, wash and press through a coarse sieve, then add to them the sugar, lemon juice and the dissolved gelatine. Allow to cool, stirring frequently. When the mixture begins to set, beat well and fold in the cream which has been whipped until stiff. Turn into a cold wet mold and chill until firm. Serve unmolded with a garnish of whole berries. Eight to ten servings.

Wash and prepare the fruit, crush, and

add the sugar. Butter a rounded bowl and line it carefully with slices of buttered bread from which the crusts have been removed. Cut the slices to fit in neatly and cover the bottom and sides of the bowl completely. Place one half of the prepared fruit in the lined bowl, cover with another layer of buttered bread slices, cut to fit and add the remainder of the fruit. Cover with a final layer of bread, place a plate on the top and weigh it down, then chill in the refrigerator overnight. Serve unmolded with sauce or cream. Six servings.

Mix the tapioca, sugar and salt with the rhubarb in the top part of a double boiler. Add the boiling water and bring to a boil, stirring constantly. Place over hot water and continue to cook until the tapioca is clear (ten to twenty minutes). Remove from the heat and when partially cold fold in the prepared pineapple. Chill and serve with cream. Six to eight servings.

Add the boiling water to the jelly powder, stir until dissolved and allow to cool. When the mixture begins to thicken, add the grapenuts, dates and raisins.

Turn into a cold wet mold and chill until firm. Serve unmolded with plain or whipped cream. Five to six servings.

Cream the one-third cupful of butter with one cupful of brown sugar and spread the mixture on the bottom of a greased ring pan. On this arrange halved maraschino cherries—rounded side down. Cream the one-half cupful of butter, add the one cupful of brown sugar and continue to cream until smooth and well blended. Add the eggs one at a time and beat well. Add the milk alternately with the sifted dry ingredients, then mash and stir in the bananas. Add the vanilla. Pour this batter over the mixture in the pan and bake in a moderate oven—375 deg. Fahr. —for about fifty minutes. Remove from the pan and cool. Just be foie serving whip the cream until stiff enough to hold its shape, sweeten to taste and fold in the mashed bananas. Fill the centre of the cake with this mixture and serve. Eight servings. 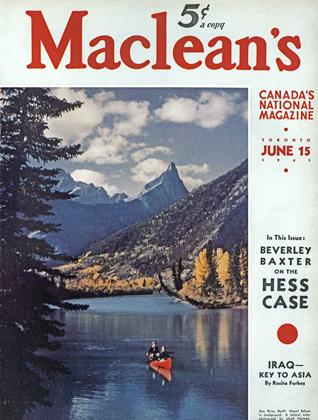