WOMEN who make their own jam are never likely to get in one. They’ll always have a store of good things on hand and no slice of toast need ever go unaccompanied to their tables, no biscuit ever be lonesome and no tart-shell cry in vain for a little co-operation in becoming a delectable dessert.

The job of turning fresh, ripe fruits into tender luscious jams and jellies is nothing to get in a flurry about. Not if you tackle • it by easy stages—a few jars at a time rather than one huge batch. It doesn’t take long this way to fill your cupboard shelves with a varied and colorful array to which you can point with pride and serve with satisfaction.

The most painless method is the modern short-boil way with commercial pectin, to cut the time of cooking and “set” the product before the fine fresh flavor has gone with the steam, if not the wind.

Recipe booklets with clear concise directions accompany each package or bottle of the liquid or powdered variety and, provided you follow them to the letter, you’re sure of a successful outcome. All the fruits you can think of are represented there and as the range of sweets for your jars is wide enough to satisfy even the most ambitious cook we’ve included only one or two in the following list. Jolly good ones though.

You’ll like the others-too—a strawberry jam with a bright clear color and delicious flavor, a rhubarb conserve that’s a honey, a spicy watermelon treat and a few more specialties for next winter’s table.

To prepare the juice, stem and crush about three pounds of ripe cherries. Do

not remove the pits. Add one-half cupful of water and bring to the boiling point. Cover and simmer gently for ten minutes. Put the fruit into a jelly bag and drain. Measure the sugar and. the juice, then combine in a large saucepan. Bring to a boil over direct heat and add the liquid pectin immediately, stirring constantly. Bring to a full-rolling boil and boil hard for one half minute longer. Remove from the heat, skim and pour quickly into clean, hot glassés. Seal. Yield—ten six-ounce glasses.

Combine the sugar and the berries, slicing or cutting in half any large ones, tot stand overnight. Place in a large saucepan over direct heat and boil hard for five minutes. Add the lemon juice and boil for three minutes longer, tot cool stirring frequently. Bottle cold. Yield about eight glasses.

Juice from y cupful of gooseberries

I leat the washed gooseberries in a small amount of water until the juice flows, simmering for ten minutes and straining through a jelly bag. Combine the strawberries and the gooseberryjuice in a saucepan. Simmer slowly until the berries are soft. Add the sugar, bring to a boil and continue cooking rapidly until the mixture will sheet from the edge of a spoon. Pour into hot sterilized jars and seal.

Prepare the rhubarb, by washing and cutting in one-inch pieces. Combine with the honey, raisins and grated rind and juice of the orange and lemon in a preserving kettle. Mix well, cover and let stand for thirty minutes. Then bring the mixture to boiling point, reduce the heat and let simmer for thirty minutes or until thick, stirring constantly. Pour into hot sterilized jars and seal.

2 Cupfuls of finely cut or

Combine the completely crushed strawberries and the ground pineapple in a large kettle and add the sugar. Mix well and bring to a full-rolling boil over strong heat. Boil vigorously for one minute, stirring before and during the toiling. Remove from the heat and stir in the pectin. Skim, stir again and repeat the skimming and stirring for about five minutes to cool the mixture slightly and prevent floating fruit. Turn into hot, sterilized jelly glasses and seal.

3 Quarts of rhubarb, cut in one-

1 Quart of strawberries, cut in

Wash and cut the rhubarb without peeling. Cook for ten minutes over a low heat, thén add the strawberries and cook five minutes longer. Measure and allow three quarters of a cupful of sugar to each cup of the pulp. Boil slowly until thick, adding the chopped nuts a few minutes before removing it from the stove. Pour into sterilized jars and seal.

Wash and pick over the raspberries and put in a large kettle. Crush and add the currant juice, obtained by heating washed currants slowly until the juice flows, then simmering for ten minutes and straining through a jelly bag. Allow the mixture to stand for ten to fifteen minutes. Bring to the toiling point and simmer for twenty minutes. Add two-thirds cupful of sugar for every cupful of fruit and toil rapidly until the syrup sheets from the edge of a spoon. Turn into hot sterilized jars and seal.

Weigh the prepared fruit and put it in a preserving kettle over strong direct heat. Add the crushed cherry pit meats tied in a

piece of cheesecloth. Heat thoroughly but do not boil. Remove the cherry pit meats. Shake the powdered pectin slowly into the fruit, stirring constantly. Bring to a high boil and boil hard for half a minute, continuing the stirring. Then stir in the sugar, bring to a full-rolling boil and boil hard for two-and-a-half minutes, stirring frequently. Remove from the heat, skim and stir by turns for five minutes to discourage fruit from floating. Pour into hot sterilized jars and seal at once. Yield, approximately nine eight-ounce glasses.

7 Cupfuls of watermelon pulp (about three pounds of whole melon)

Prepare the watermelon pulp by remov. ing the rind and seeds from the water.

melon and leaving only the pink portion. Squeeze out of this as much water as possible, then drain and measure the pulp. Cook the pulp, sugar and vinegar together over a moderate heat for about thirty minutes. Add the lemon, cloves and cinnamon tied in a spice bag and cook slowly for twenty-five minutes longer, or until it is thick and brick-red in color. Pour into sterilized jars and seal. Yield about six six-ounce jars.

Combine the fruit and the sugar. Bring slowly to the boiling point. Boil hard for about twelve minutes, stirring frequently. Add the lemon juice, cook for five minutes longer or until of a jam-like consistency. Pour into sterilized jars and seal. Yield eight six-ounce jars. 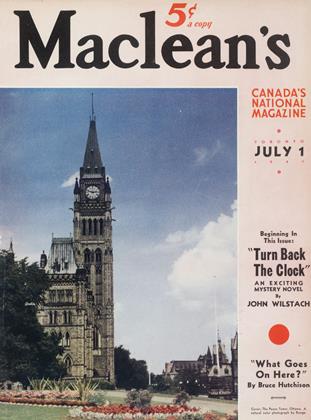