AS THIS issue of Maclean's goes to press, no available information indicates how successful Russia will be in resisting the invading German armies.

Much will depend upon the efficiency of the Russian equipment and the strategy of the Soviet command.

The German High Command, which no doubt possesses considerable information concerning the Russian war machine, believes Russia can be washed up in three months. On the other hand, if Russian morale is high, the same tactics employed by the Chinese against the mechanized Japs may upset that schedule, even if superior equipment and better trained troops give the Nazis initial advantages.

Whatever may happen, the point that is immediately clear is that Canada must act now on the basis that no possibility is too remote.

Should the German armies overrun Russia, no matter how vast her territory is, no matter how inadequate her transportation systems may be, it would only be a matter of time until Nazi air bases are established along the Siberian coast. The air distance from Siberia to Alaska and the Pacific Coast of Canada is no deterrent at all.

The Canadian General Staff must be fully aware of this fact. But we have not come across any evidence that the awareness is being translated into action; not in the matter of training troops on Canadian soil for the type of warfare that is being waged in Europe.

Nobody could accuse the Toronto Daily Star of unfriendliness toward the Ottawa Government Yet that paper’s own war reviewer, W. R. Plewman, before the war spread to Russia, stated:

“One of the most important measures if not THE most important measure that this country could take for winning the war would be the placing of an abbreviated manual in the hands of Canadian military camp instructors that would describe in detail the lessons taught by actual fighting in the years 1940 and 1941 and the weapons and tactics that should be used in warfare today . . . The work should be put in hand not next year nor next month but within a week

“The importance of this subject is such that the expression of Col. Drew’s views with

respect to it are welcome Col. Drew stated at Brantford last night that the Dominion should train attacking forces upon new and original plans based upon what has already been learned in Crete and elsewhere. He added: ‘We should discard our conventional theories of war and create new plans of training and new plans of operation. There is no need for us to train masses of infantry, artillery and cavalry. Those who believe that our training system should be adjusted to modern conditions should say so upon every possible occasion and without delay.’ The soundness of that view is not open to question ”

\ >fORE than that, there is urgent necessity "LV'L for a well-defined war plan. Individually, supply departments of the Government generally are doing good work. We are spending vast sums of money, turning out vast quantities of supplies, arriving at mass production of war commodities that are certainly needed in the general picture

But while the Minister of National Defense has himself declared that our greatest enemy is the man who thinks there is lots of time, the fact is that the Government has not yet coordinated our effort so that full concentration can be made on that which is most important. No decision seems to have been made yet as to what is most important.

To many competent observers the lesson of the war so far is that the most valorous soldiers in the world, the mightiest navy, can suffer reverses if not backed by superior air power.

We are doing a good job with the Commonwealth Air Training Plan, with our Navy, but we still spend more money on the Army than on either of the other two services. And the Army, here on Canadian soil, is not trained or equipped along the lines of the German forces which have swept through Europe. Whatever the reasons may be, the fact remains.

Maclean's itself does not pose as an expert military authority. It cannot say that this, that or the other course should be followed in matters of strategy.

What it does say is that the authorities at Ottawa ought to know.

What it does say is that its information—and it comes from men who are working unstintedly,

What it does say is that all our production, good as it may be; all our financial response; all our effort, big as it is, will fall short of the purpose unless each phase is a well-fitted part in a definite, co-ordinated plan.

nouncement that the British Government very much desired an Imperial war conference this summer but that neither General Smuts, Prime Minister of South Africa, nor Mr. King, Prime Minister of Canada, had found it possible to attend, is causing much raising of eyebrows as this is written

Mr. Churchill stated that both General Smuts and Mr. King had regretted that “the exigencies of their work in their respective countries” would not permit them to leave.

Because of the unusual political and racial situation in South Africa and because he is acting as Commander in Chief of that country’s forces, General Smut’s position is understandable. It is not so easy to understand the position of Mr. King. By word and action, he has indicated that he has complete confidence in his ministers. He has assured the world that the peoples of Canada are united. And he has found time to tour the West on an inspection of our war effort, which has been inspected by several ministers.

Apart from anything else, the propaganda value of such a visit, in Britain, Canada and in enemy countries too, would have been great. And the practical results on our war effort of round table meetings with the Empire’s leaders would have been far greater than those obtainable over the transatlantic telephone.

It is possible that matters of such weight are impending that Mr. King’s decision will be fully justified, but at the moment public reaction is one of impatience. 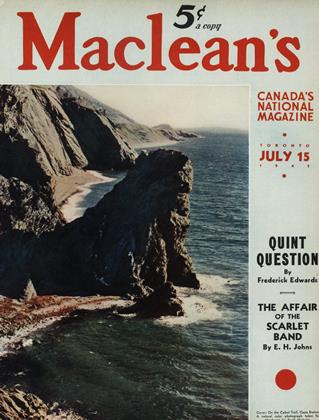