CANADA is calling on the women of the Dominion for military service. Seven thousand women will be enlisted in the next few months, Ottawa has announced, to perform auxiliary services for the Army, Navy and Air Force as drivers, cooks, waitresses, canteen helpers, typists and messengers. The women will be paid and will wear khaki, air force or navy blue.

The women of Canada did not wait for the official call to duty before starting to fit themselves for wartime work. Organizations have sprung up spontaneously all over the Dominion—the Canadian Auxiliary Territorial Service and the Canadian Women’s Service Force both started in Ontario and now have units in other provinces; there is the Women’s Volunteer Reserve Corps in Montreal, the Women’s Auxiliary Defense Corps in Hamilton, and the Women’s Reserve in British Columbia, to mention only a few of the groups now active. There are said to be at least 10,(XX) women—some estimates double that figure —wearing the uniforms of these volunteer forces: they are schoolgirls and housewives, stenographers and college co-eds. Now the government has indicated that advantage will be taken of the training that these have acquired.

No organization demands higher qualifications, more thorough training and stricter discipline, or performs more useful tasks than the Canadian Red Cross Transport Service, whose drivers and officers are seen at work in these pictures. There are some 1,000 of them. Along with their associated services— Nursing, Office, and Food Administration—they comprise the Canadian Red Cross Corps of nearly 3,800 members throughout the Maritimes, Quebec, Ontario and British Columbia. The Corps is affiliated with the Royal Canadian Army Medical Corps.

The Red Cross drivers are more than glamour girls in uniform. Applicants must be between eighteen and forty years, provide character references, doctor’s certificate. They must have held a driving license without suspension for three years and have completed recognized first-aid and motor-mechanics courses. They are on probation as recruits for six weeks of intensive military drill and basic training.

Women of the Transport Service are on call with their ambulances for the R.C.A.F., to transport stretcher cases. They chauffeur members of overseas missions for the government, man trucks for patriotic salvage drives, drive Red Cross station wagons and delivery trucks.

The Transport Service, like all the Red Cross Corps, serves voluntarily. The drivers spend thirtytwo to forty-four hours weekly on duty, and discipline is strict. Like thousands of other Canadian women they undertook to train themselves—now they are eager to be mobilized. 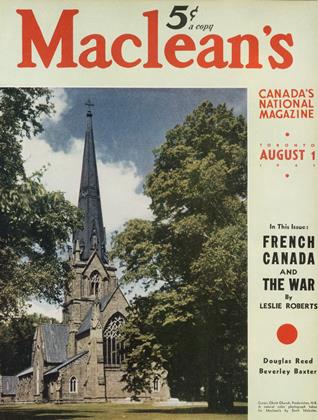