WE’VE all done our share of longing for the good old days when everything was simpler and we didn’t have to put on a “spread” every time we entertained a few of our friends.

Well, now we’ve got ’em in that respect at least; simplicity is the fashion again and hostesses vie with each other merely in the amount of knitting, sewing, quilting or other good work done at their parties.

The most popular refreshments nowadays are of the inexpensive, easy-to-get-ready order. No one has the money or the conscience to serve luxuries, and neither has anyone the time for fixin’s and falderals. But this doesn’t mean that you can’t provide something very nice indeed, for even the simplest menu can be appetizing and original. We’ve planned a number for you, keeping in mind those informal and purposeful get-togethers which are in full swing all over the country. They are designed to help the hostess with a budget to consider and the refreshment convener who doesn’t want the profits all eaten up. As you’ll notice, Canadian products have the spotlight and nothing requires so much time that you have to be more than a few minutes in the kitchen. You could do your full stint of war work and serve any of these.

Two-course menus — for bazaars, bridges and other teas to raise money for buying wool or donating to War Relief Funds.

Suggested menus — to be served when you are entertaining the boys to a sleigh ride, a skating party or some other outdoor “do.” Or when your club has worked hard all evening and needs a bite of something substantial.

HERE ARE the recipes for some of the less familiar dishes suggested. You can see for yourself that they are easy to make, and a good many of them can be prepared beforehand.

Place the cabbage, onion, water, and seasoning in a saucepan, and cook until tender. Place over hot water, add the flour mixed with the sour cream and cook, stirring constantly until thickened. When serving sprinkle with paprika. Six to eight servings.

Salt and pepper to taste.

Cut lengthwise slices from half a loaf of white bread. Remove the crusts, spread with butter and the above ingredients mixed to a paste. Roll each sandwich, secure with a toothpick and toast until lightly browned in the oven. Makes about eighteen rolls.

1 Can of tomato soup 1 Cupful of cheese, grated 1 Egg

Heat the tomato soup (undiluted) in a double boiler. Add the grated cheese and stir until melted, then add the egg and cook for a few minutes. Cool before spreading between buttered bread, then toast and serve piping hot with a bit of parsley for garnish.

Cut two slices of bread lengthwise of the loaf and remove the crusts. Combine the butter and chopped parsley and spread on the bread. Spread the flaked lobster over this then roll the bread carefully, fastening with two or three toothpicks. Wrap the roll in a damp cloth and

allow to stand in refrigerator about half an hour or longer. Cut the roll into one-inch slices, then place on a buttered pan and heat in a moderate oven -400 deg. Fahr.—for about fifteen minutes, or until nicely browned. Serve with a hot creamy parsley sauce.

Cut very thin slices lengthwise from a medium-sized carrot. Roll up into the shape of a cone. Fasten with a toothpick and place in ice water until crisp. Drain and fill with cream cheese or cottage cheese and garnish with parsley.

Dissolve the jelly powder in the boiling water, add the cold water and salt and set in a cool place. When it begins to thicken put into a mold with alternate layers of vegetables and cranberries. Chill until firm. Unmold and serve on salad greens. Six to eight servings.

Cream the butter, add the cheese and mix well. Stir in the honey and add the apple, which has been pared and sliced into thin, wafer-like pieces. Use as a filling for white or brown bread sandwiches and serve either toasted or plain.

Combine the first six ingredients in the top part of a double boiler and cook over hot water. Stir frequently until the tapioca is clear (about fifteen minutes). Add the remaining ingredients and mix well. Cool. This makes about two cupfuls of filling. 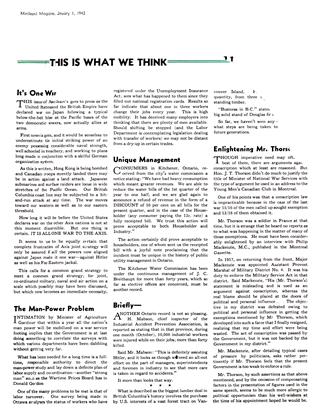