regularly by street car have an inalienable right to grumble, dating back to the day in the early eighteen-eighties when the first horse-drawn vehicle to run on rails made its inaugural round trip. It has remained for a seventeenyear-old Calgary youth to present the epic protest. He

is appealing to Ottawa, under the price control regulations, to compel the municipally-owned street-railway system to cease and desist from charging him an extra fare. The lad lives in Critchley, a Calgary suburb served by the same line that carries passengers to Bowness Park, a popular resort a few miles west of the city limits. During the summer months the Bowness Park service carries passengers from Calgary to the terminus for a single fare. In winter the park closes down, and a double fare is instituted. This bas been going on for ever so long, but last fall, when the twofares-to-Critchley rule was again invoked the young objector said: “No. You can’t do this to me. You can’t raise the fare higher than it was Sept. 15 to Oct. 11.” Now both the City of Calgary and the protesting passenger are asking Price Controller Donald Gordon for a ruling on whether or not street-car fares come under the recently established price ceiling.

Knowledge of world affairs as revealed in an examination paper by a York Mills, Ontario, tenyear-old school miss:

Question: What are the three Axis powers, in

Some sort of medal for all-round competence should be awarded to Sergeant Major Laubman, a veteran of the first World War, a vocalist of renown and former leader of the First Presbyterian Church choir at Edmonton, Alta. Now the sergeant major is back in the Army, doing recruiting duty. On a recent trip to White Court, Alta., the car carrying Colonel W. L. Hale with Sergeant Major L,aubman at the wheel, broke down near Barrhead. The ubiquitous ex-choir leader borrowed a hack saw, a length of pipe and a hammer from a nearby farmhouse, and next thing you knew the engine was turning over smoothly and the recruiting detachment was on its wav.

Beside a Cranbrook, B.C., undertaking establishment is a blank wall frequently pre-empted by bill posters. Not long since the space adjoining the funeral parlor was covered with highly-colored cinema announcements dismally proclaiming, “The Way of All Flesh.”

There is an engaging frankness about the Toronto Daily Star's report on the adventures of Private Robert John Paton. Private Paton, the newspaper announced recently: “. . . used to work on a Star delivery truck. Now he’s safe overseas . . . ”

The new North American wheat king, crowned at Chicago’s forty-second international exposition, is William Miller, of North Edmonton, who would never have thought of trying to grow prize wheat if an unknown employee of a seed-distributing firm hadn’t gummed things up hack in 1932. That year William Miller, wishing to sow a five-acre field to

wheat, ordered a shipment of commercial seed. Mr. Miller’s wheat got mixed up with somebody else’s, and the North Edmonton grower received registered grain instead of the run-of-mine stock he had requested. Rather than bother about an adjustment William Miller sowed the selected wheat and exhibited samples of his crop. He failed to get into the prize list the first year, placed fifteenth at a subsequent exhibition, was second in 1940, and finally achieved the accolade of producer of the finest wheat in North America last autumn.

Why doesn’t somebody make that sort of a blunder on our behalf, sometime?

At the Fourth Avenue Baptist Church in Ottawa, the Rev. M. L. Orchard had prepared a special sermon in tune with the times. It was ^ unfortunate that the newspaper announcements should appear in print:

Three of our operatives spotted this coincidental phenomenon; but the lady who lives at Vegreville was a full twenty-four hours ahead of the other lady from New Norway and of the gentleman from Sylvan Lake.

Eddie Allen, a member of the Happy Gang variety group broadcasting a popular afternoon program from Toronto, is ducking around corners and sneaking up hack alleys these days. Radioperformer Allen finds it embarrassing to meet his friends since he fell into the clutches of the law— because he had no license for the radio in his automobile.

A resident of Cornwall, Ont., who has been fishing for years in the St. Lawrence near the point where the Soulanges Canal parallels the river, was halted on his way across one of the canal lock gates, on an early morning a few weeks back, by a soldier who pointed a fixed bayonet at his belt buckle. “You can’t pass here,” the sentry told the fisherman. The lengthy argument that followed finally arrived at the stage where the sentry demanded the tin box of tackle the fisherman was carrying, for inspection. The box was handed over, but the soldier found the job of examining its contents difficult, since the footwalk over the lock gates is a scant two feet wide, leaving little room for extraneous activities. The sentry solved the problem in his own way: “Here,” he said, thrusting his rifle, complete with bayonet, at the fisherman. “I need two hands for this job. Hold my gun for me while I have a look-see.” 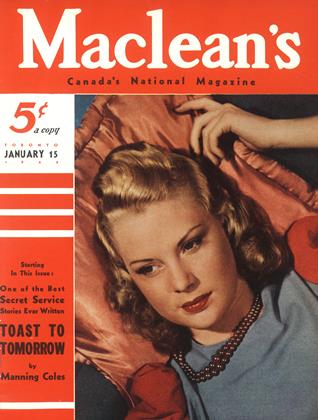