LONDON, England. September. The editor of Maclean’s has suggested that in this article I should discuss for Canadian readers the “reaction” of the British people in this island to the crisis of India. I need to begin by saying that there is no reaction, and this statement immediately demands an explanation for it will probably puzzle those who live at a distance from this country. But it is true. The ability to react dwindles, if it does not atrophy, in the British people

The reasons have deep roots reaching far back into the past. In brief they are these: In the last eleven years public opinion in this country has produced a series of violent reactions, each one a little less violent and a little less hopeful than its predecessor because the foregoing reaction failed to move the rulers of the country to the course desired. I say eleven years because the starting point of this process, as far as one can be definitely fixed, was in 1931, at the time of the Japanese attack on China. At that time the British people violently, spontaneously and passionately reacted, clamoring that the new outbreak of imperialist aggression, of which it discerned the beginning in that undertaking, should be nipped in the bud and crushed at the beginning. Instead the leaders of British policy used mild and placatory words on which they were congratulated by Japanese representatives at Geneva. Allusions to “the Japanese experiment” were heard and public opinion, rebuffed and disconcerted, sought to comfort itself with the thought that perhaps its rulers knew best and fell back into a distrustful but passively acquiescent mood.

In the nine years that followed British opinion reacted passionately, but each time a little less passionately to a series of events all of which it instinctively and rightly felt contained a larger germ of direct menace to this country. It loudly clamored for German rearmament to be prevented, was glad when it was told that this would be done, and when its hopes were again dashed by the unhindered German seizure of the Rhineland, it lapsed again into a moody acquiescence. The next passionate reaction came at the Italian swoop on Abyssinia when it roused itself to return a great majority of members to the Commons all pledged, with the Government they supported, to lead the nations of the world in smashing aggression, belatedly perhaps but mercilessly. I do not think the British ability to react ever really recovered from the crushing blow which it then received in the shape of the Franco-British agreement, long preconcerted, to partition Abyssinia for the placation of the aggressor.

At that time the Britisli people began to think that to react was not worth while and grew cynical. They disliked, but seemed no longer to have the strength of feeling to detest, the ensuing German and Italian aggression in Spain and in a moment of madness, bitterly regretted the morning after, they even cheered themselves hoarse in Whitehall about the agreement of Munich.

When the war they had thus vainly tried to avert came on them the capacity of the British people to react revived and between the accomplished disaster of Norway and the impending one of France became passionate enough in its alarm to help bring about the downfall of Mr. Chamberlain. The future that day seemed certain to be one of strong and healthy public reactions at dangerous crises in our affairs which would thereafter be effective in molding British policy to the British hearts’ desire. The first sign of new frustration was Mr. Churchill’s enlistment in his Government of all the leading politicians of the preceding years. This gave a shock to the ability to react only comparable with the one it received from the Hoare-Laval Pact, and successive blows which numbed it

were the refusals to hold any enquiry into the disasters of Dunkirk, Singapore, Malaya, Tobruk, and others.

IT REVIVED violently once more. That was a year ago when the miracle happened. The Germans were halted before Moscow, a merciless winter fell upon them and at a blow the spirit of the German people toppled from the peaks of exultation into the slough of despond. The British reaction was to strike. “Here,” said the British reaction, “is a completely unexpected, a heaven-sent chance, far beyond our rosiest hopes, to win the war.” This reaction was coldly quenched by official

announcements that we “should not attack before 1943”; that we “lacked shipping” and a hundred other things.

Today as I write, while Stalingrad still holds, while another miracle is being worked, while an even better chance offers than was offered a year ago to win the war quickly, there is no perceptible reaction here. The power to react has been repressed almost to extinction. What people think in their hearts I cannot surmise. They no longer discuss the war. They remain as doggedly resolved as ever to win it, but from so many frustrations of their instinctive hopes they clothe themselves in silence.

All this is a great deal about reaction but little about India. It was necessary to show why there is no reaction worth speaking of in this country to the problems in India. One feels that people have almost ceased to think. The days have long gone when they, so few of whom ever saw India, could be brought to cheer by references to it as “the brightest jewel in Empire’s crown.” Nevertheless until recent times the crisis that has arisen there would have caused clamorous echo here. Now for the reasons I have given there is little. Any opinion there may be is buried in men’s hearts. In April, when the threat to India from outside first became clear, a man much in public affairs, Harold Nicolson, wrote: “The position in India is not taken tragically by the general public who have for long been convinced that change is necessary.” The statement mystified me when it was made, because the only change that seemed likely at that moment was one which might be brought about by a Japanese invasion, and I do not believe the British public to be “convinced” that any such change as that “is necessary.” They may not now feel equal to an active yearning to hold India but they still can rise to the passive desire not to lose India. But made at any earlier time I think this statement would certainly represent British feeling. For the British people, who from repression now lose the capacity to manifest their feelings openly, are in their intuitions constantly ahead of their leaders and at any time during the last twenty years would have welcomed the offer of Dominion status which Sir Stafford Cripps took to India. Once again the inarticulate giant, British opinion, was right for this offer would have been better if made at any other time than the moment when it was made. Gifts that are proffered when the burglar stands at the door look much less attractive. Now that months have passed and the Japanese have not struck at India, general interest here has certainly lapsed and you might talk to a hundred men without hearing India mentioned. For one thing the newspapers publish little news about India. A subtle censorship seems to work. For another, people here are almost

completely ignorant of the outer world’s opinion about India and the British offer to India. In the case of America the American censorship is responsible for this, having prevented the transmission to this country of unfavorable comments made in the American press. The repression of opinion in this country is one of the queerest phenomena I have seen. Although there is no rigid censorship in the sense of censorship as practiceu in the dictatorships, although a man of robust opinions may still openly express them, the habit of repression seems, from the causes I have described, to have grown into the British soul so that the results, as far as expression of opinion goes, are not far different from what I saw in countries where the most rigorous suppression of opinion was practiced.

IN THE early stages of this war someone devised and posted throughout this land a placard showing a man, with the appearance of a mental deficient and the symptoms of advanced elephantiasis, who bore on the back of his waistcoat the legend, “Be like dad and keep mum.” This admonition seems to have been taken seriously. So I can report no reaction. I can find none either in the press or in men’s talk.

The British people after all suffer very much more than the world realizes and cannot muster up great enthusiasm at the moment for any other wish than victory and the end of the war. But if you could look into people’s hearts you would find that they deeply regret to learn that 721 rioters have been killed in India and that the R.A.F. have been in action there. They would give a great deal if this could have been avoided. And although Mr. Churchill’s last speech on India said that “the situation is reassuring” and “there is no occasion for undue despondency or alarm,” I think most people here feel that the situation ill accords with the principles proclaimed in the Atlantic Charter and that Indian discontent has only been driven underground.

With the memory of Malaya and Burma in their minds they do not like this and do not think the state of deadlock which remained after the failure of the Cripps mission should be regarded with any complacency. They would like a way to be found out of it and they do not agree that the British part now is to wait for the Indians to find it. This as I say is not a formulated and articulate British reaction because that is lacking. But it is, as I believe, the British feeling.

YOU CAN determine whether your car brakes are reasonably safe for moderate driving by making a simple test with a milk bottle. Just pour a pint of water in a quart bottle, cap it and set it on the car floor. Next select a level road or street, drive the car at twenty m.p.h. and apply the brakes. If the bottle does not upset, the brakes will not pass official inspection.— Popular Mechanics. 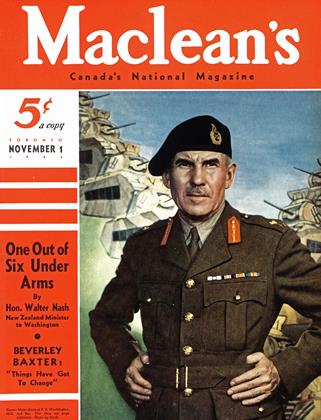