All This Is Great Gain

WAIVER BY Great Britain, the United States and Canada of extraterritorial rights in China is an important victory for the cause of democracy.

When the news reached Chungking on the eve of the Chinese Republic’s thirty-first birthday, there was an upsurge of rejoicing such as that battered capital has not seen in many a day.

For China knew that it meant the end of a century of galling inequality.

Extraterritoriality began with the Treaty of Nanking signed on the deck of a British warship in the Yangtze River, August 29, 1842. This treaty gave all British subjects certain special rights in China. Two years later the Americans secured similar rights. In due course fifteen other powers, including Japan, followed suit.

From these beginnings extraterritoriality developed through a series of wars and treaties into a complex set of “rights” which meant among other things that the Chinese Government had no jurisdiction over foreign citizens; that its police could not arrest foreign criminals; that its courts, civil or criminal, could not act against foreigners; that it could not tax foreign business firms.

In the days when China’s central government was weak there may have been some justification for the system. But as national consciousness grew and government became more stabilized the “unequal treaties” became highly prejudicial to China’s sovereignty and national pride.

Now the slate is wiped clean and the China which for five long years has held Japan at bay has become, in truth, one of the United Nations, a free and equal partner in the fight for freedom.

Thus, while Tokyo preaching “Asia for the Asiatics” in reality forces Asiatics into slavery, the United Nations translate the principles of the Atlantic Charter into action.

All this is great gain.

This represents a remarkable achievement for a country which little more than three yearsago was producing practically no war supplies.

But we are still a long way from maximum mobilization for total war.

Figures released recently by the Bank of Canada indicate that workers in civilian industry still outnumber warworkers by more than two to one.

Furthermore, since the start of the war there has been only a minor reduction in the number of persons engaged in civilian industry, the figure for September, 1939, having been 2,269,000.

All of which explains why Messrs. Little and Gordon plan to “concentrate” civilian industry to squeeze out more workers for war jobs.

Only when civilian industrial production has been reduced to the irreducible minimum will we really be on a total war footing.

COMMENTING on the Dieppe raid in this column six weeks ago we suggested that one of the chief lessons taught by the raid was the need for more effective use of our air power against enemy ground forces, and greater tactical use of the airplane by our own ground forces.

Now comes opinion from Britain which not only supports this contention but suggests that the lesson of Dieppe is not being assimilated as it should be.

Writing under the title “Third Thoughts On Dieppe” in the London Standard, the Military Correspondent of that paper declares:

“There is something materially wrong with our air tactics if we cannot exploit air superiority such as we enjoyed at Dieppe to hamstring the defense during the vital moment of attack.

“Our own Air Force tactic and organization,” continues the Standard writer, “has not yet the flexibility to enable it to co-operate with the land force in a major modern battle against strongly defended positions. . .

“If we could feel that the result of the test (of Dieppe) were being quietly and fully assimilated by those concerned, irrespective of personal pique or service pride, there would be little need to reopen the subject. But there has been ample and public evidence that this is not so. It is

apparent enough that each of our services is still concerned to shift the burden of revision from its shoulders on to those on whom they please to look as their rivals.”

A similar view is expressed by John Gordon, another commentator, in the London Express:

“We have had two years to plan how to get an army into the air. But... we still give no evidence of having learned the basic lesson of this war, which is that there is no longer a Navy, an Army and an Air Force, but one combined fighting force operating on land, on sea and in the air as necessity demands, with always the air arm as the real striking force.”

It is to be hoped that it won’t take another Dieppe to drive this lesson home—in Canada as in Britain.

TOURING 1940, when the fortunes of war were running ominously against us, many thousands of British children found sanctuary on this continent and in other parts of the overseas English-speaking world.

Neither then nor since have the hosts of these children felt they were entitled to any reward other than the satisfaction of giving help where help was needed.

A group of influential men and women in Britain, however, felt otherwise and have devised substantial means of showing their appreciation for what foster parents beyond the seas have done for Britain’s children.

They have established a foundation known as the Kinsmen Trust, the funds of which will be used after the war to provide scholarships in Britain for students from Canada and the other Dominions and from the United States. Children or relatives of foster parents will have first call on these scholarships; where no direct relative can qualify, any student nominated by a foster parent will be considered.

Chairman of the fund’s trustees is Rt. Hon. Lord Gorell, C.B.E.; and among the other trustees are Lady Tweedsmuir, Lord Bennett, and Sir Harry Brittain, K.B.E.

One of the most gracious aspects of a gracious proposal is that students who go to study in Britain will live in British homes on the same “terms” as those on which British children were accepted in Canada, the U.S. and elsewhere during the dark days of 1940. 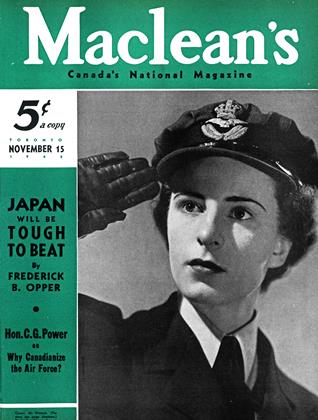