Backstage at Ottawa THE MAN WITH A NOTEBOOK December 1 1942

THE GOVERNMENT is worried—more worried than appears on the surface; more worried than it may ever admit, officially. This is no backstage political worry; it is an earthy, grass roots problem. It is the fact that not enough Canadian farmers are paying income taxes or buying War Bonds.

Back in the summer, when financial experts were sharpening their pencils to see how much the national income had risen and how much might be syphoned off in Victory Bonds, the farmer and the wage-earner were put at the head of the list as bond prospects. As crop conditions improved, the hope for a big sale among farmers grew steadily.

On top of this, a “sure-fire” plan of “Victory. Tickets” was introduced to help every farmer help his country. This ticket idea started in the West. A lot of people thought it would sell a lot of bonds and war savings certificates to a lot of farmers, whether they had the ready cash in the bank or not.

The plan provided for the turning of farm produce into Victory Bonds without involving immediate cash payment. The farmer, who expected to market a dozen pigs in a month or so, was asked merely to sign a Victory Ticket ' authorizing the Government to deduct so much from the proceeds of the sale. The transaction was handled directly between the War Finance Committee and the farmer’s slaughterhouse or dealer. There was even an arrangement worked out whereby money f rom bonus cheques for wheat, etc., could be used directly in the purchase of bonds or certificates.

To make a long and sorry story short, not only the Victory Ticket, but the whole farm participation plan so far as the Third Victory Loan was concerned, proved a disappointment In one large and prosperous central Canadian area, where there are possibly 250,000 people (a big proportion of whom live on farms), there weren’t more than a dozen Victory Tickets sold during the entire campaign—not enough to begin to pay the costs of the promotion literature that was distributed in that area to introduce the plan. Ontario fafmers, especialty, are said to have objected to the plan because they do not market their produce through any one single “channel.” Almost all farmers shied away from any sort of a document which involved the Department of Finance and their signature.

Furthermore, in western Canada, the “timing” of the loan proved just about as bad as it could be. No one can be blamed for that except the weatherman. The dating of the loan in the first place was done on the advice of , the western representatives. In a normal year it might have been fine. But with this year’s late harvest, even the farmer-canvassers themselves were tied to their fields.

Apart from the bad “break” in western weather which put campaign plans in many areas completely out of kilter, the bald fact seems to be that Canadian farmers are now so

wholly tax-shy that they just -won't risk the possibility that the Government’s right hand (Income Tax) may at some immediate or future date find out what its left hand (National War Finance) is doing. Meanwhile, the farmer’s cash continues to pile up in the bank or be spent in new' equipment, livestock, home improvements, etc.

MEANWHILE, also, Ottawa has named a special committee to study this whole question of farm income tax. Behind this is the startling statistic that in 1942, only 8,500 Canadian farmers paid income tax, although a larger number (about 25,000) filed returns. These returns cover the year 1941. They compare with about 4,000 who paid taxes the previous year, and with an earlier pre-war average of between 1,200 and 1,500.

These figures, and subsequent returns this fall, convince Ottawa that there is wholesale avoidance if not evasion of income tax by the Canadian farmer. Admittedly it is no easy job for the average farmer to compute his tax liability or even to put his accounts on a basis where he knows accurately just what is his liability (if any). But Ottawa feels something must and will be done so far as 1943 returns (covering 1942 income) are concerned. One approach will be to simplify the form of return. And whatever is done, the farmer will probably be assured of one thing—there will be no attempt to prv into the past. So far as last year’s income is concerned the Government is reported as willing to let bygones be bygones. What it seeks is to get taxable farmers on to the 1942-43 tax roll and not worry too much about any tax money that has already gone under the bridge.

Apart from farmers’ taxes, the most contentious and difficult problem on Parliament Hill is still manpower.

There are two important phases to this problem as this is written : (1) the personal and internal struggle for authority going on around Elliott M. Little and (2) that hardy old perennial “big Army.”

Mr. Little’s problem has been a long-standing battle to obtain administrative control, first, of the Army draft machinery, and second ! of the local employment offices Í throughout Canada which are the beginning and end of National Selective Service. For some time now, instead of turning his full energy to I the finding of men and women for I war industry and the armed services, j Mr. Little has been battling behind the scenes for final authority to ! control the machinery which, in his ! view, is a prime essential to man! power mobilization, it is reported.

The battle for the draft machinery ended when Major-General LaFleche ! finally “surrendered,” to receive,

! shortly thereafter, a Cabinet appoint; ment. The employment office fracas I came to a head while Hon. Humphrey ; Mitchell was still in England, and j was featured by passage of two completely contradictory orders in J council.

The first of these (P.C. 7994) was ! passed in early September and pur| ported to place direct administrative control of the employment machinery under N.S.S. The order did actually I turn the Unemployment Insurance Commission over to the Department of Labor, lock, stock and barrel for j the duration of the war. But there was a “joker” clause which left the control of the employment offices not in Mr. Little’s hands but in the hands of one of the commissioners.

MR. LITTLE apparently interpreted this as something very close to an official “double cross.” So a new order (P.C. 9466) was passed which placed the entire insurance machinery in the hands of A. E. Pequegnat, of Waterloo, whom Mr. Little had named as his associate director in charge of civilian services. This order, it is reported, raised a j rumpus within the labor department, and if Mr. Little should return to his pulp and paper business in the near future, his retirement could probably be chalked up as a victory for Ottawa officialdom and a defeat for the businessman’s approach to the problem of wartime administration.

The “big Army” problem is a less personal but more fundamental issue.

■ In essence, it centres around the fact that the Cabinet had not, in early November, faced up squarely to the manpower implications of Canada’s present vast Army establishment. To admit that Canada cannot raise its big Army under existing draft and I enlistment machinery would be to I open the door to conscriptionists and ; raise a direct issue between Mr. King i and Col. Ralston. This is something Mr. King is still anxious to avoid at all costs.

One alternative might be to let Mr. Gordon and Mr. Little squeeze I the orange of nonessential civilian I manpower so hard and so fast that j the public itself will rebel against the big Army plan. But here again j Ottawa hears that the Cabinet is also j shying away from too rapid elimina' tion of nonessential industry.

It all goes to show that there are still some very fundamental decisions to be made at the Cabinet level before Canada’s manpower bosses get a clear “go” sign to their newly drawn blueprints for total war.

THERE are very mixed feelings here about the appointment of L. Dana Wilgress as Canada’s Minister to Russia. As Prime Minister King said to a press conference in announcing the appointments, Mr. Wilgress is the “obvious choice.” At the same time he is a man whom Ottawa can ill afford to spare.

Mr. Wilgress wasan honor graduate of McGill University the year that Sir George Foster appealed to that institution for bright young men to enter the trade commissioner service. He was sent almost immediately on a very tough assignment to Russia, shortly before the second Bolshevist coup of the early ’twenties. In Moscow he made a close friend of the now famous writer, Bruce Lockhart (a friendship which was renewed when the two men met in Prague a few years later). He also won a charming wife—Olga Buergin of Vladivostock, Siberia.

Some years later, after Dana Wilgress had made a name for himself as Canada’s trade envoy in Hamburg, Germany, Hon. Harry Stevens brought him back to Canada to head up the entire Trade Commissioner service. His appointment as Deputy Minister of Trade and Commerce came ten years later, in October, 1940.

Since then he has become Canada’s treaty-maker extraordinary. He has had a part in the negotiation of every important trade pact which this country has made in the past decade.

Ottawa opinion is that our relationships with Russia could be in no better hands. 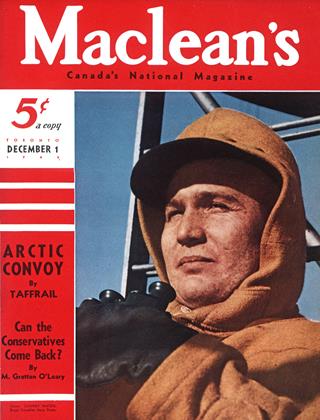