LONDON, January 6 (By Cable). On December 31, 1940, only a few dozen curious people gathered at the steps of battered St. Paul’s, where in peacetime scores of thousands come to sing the Old Year out and the New Year in. Around them the ruined city still smoldered, DOUGLAS REED and they were subdued. On December 31, 1941, some two thousand revellers met there and sang themselves hoarse. As 1942 was born, death no longer hummed overhead and the New Year, though it looks dark enough, seems noondaybright compared with the New Year that was born twelve months ago.

The changed scene on the steps of St. Paul’s tells the story of 1941. When Canadian readers see these lines, 1942 will be a month old. It finds people here toiling uphill, but inspired by the feeling that now at length they are definitely moving upward and have nearly reached the summit of their ordeals. However long the road, they now see Victory clearly at the end of it, and I never knew the British people so full of fight. The burdens they carry would break any other backs. Taxation has reached a point which makes thrifty planning for the future impossible. That, with so many other projects, must be shelved until the end of the war.

Men up to the age of fifty—and that means the survivors of the last war—are now liable to be conscripted, and Mr. Churchill has hinted that the age may be raised even to sixty. These men, if by their merit or valor they won officer’s rank in the last war, will this time be called up as privates; and as far as I know this is the only country in the world where the rule does not obtain that a man always retains the highest rank he formerly won. They will be used for sedentary duties to release younger men for more active tasks. That appears to mean that they will not even have the consolation of service in ships, tanks, or airplanes, but that menial tasks in barracks may fall to them. A harder lot than this, or a more unworthy reward for the volunteers of the last war as they approach old age, could hardly be imagined.

And this time the women, too, are to be conscripted, for the present up to the age of thirty. Are they this time to taste unemployment, and the bitterness of being unwanted, after the war? Dark problems begin to loom beyond Victory when it has been won. But for the nonce, no one bothers with them. The common desire of all is to press on with, and win, this war, to hit the enemy hard; and the uplift of spirit which is perceptible, derives from the fact that we are beginning to hit him hard. Hence the singing and dancing revellers on the steps of St. Paul’s.

JAPAN’S jump into the war neither surprised nor disturbed people here. They expected it. What did give them a jolt was the extent of the initial Japanese successes. The loss of the Prince of Wales and Revulse was bitter. The British people love their big ships and feel their loss almost more than a land campaign that goes agley. Plymouth and Devonport suffer more from such news than from the bombs which have so unmercifully rained on them.

A heavy blow, too, was the damage done to the

U. S. Navy by the Japanese when they first struck at Pearl Harbor. The British, though they take a long time to understand politics, or land warfare, instinctively understand sea power and realize that the unexpectedly-great successes obtained by the Japanese are likely to set the clock of the war back just when prospects were brightening. From day to day the Americans seem to have been in a state of unreadiness and unalertness which makes even our past errors of remissness seem insignificant. But the British people can take disaster on the chin and have already dismissed the bitter taste of those December events from their minds.

The Germans, at all events and at long length, are being made to taste their own medicine and that gives the British people a grim satisfaction. They have their teeth well into the job now. Young people of both sexes, save those in uniform or on leave, are gradually fading from the English scene. Only the aged or aging, and school children, are about. The fighting machine is warming up and now our turn is coming. I am convinced that but for the Japanese intervention and its regrettablylarge measure of initial success, this would have been the last winter to see the Germans at war with us. Now, that may not be so, but the signs that the end was beginning were clear to see for those who know Germany.

Danger spreads . . . but I never knew the British people so full of fight . . . They see Victory at the end of the road

is a snub to his generals. His generals today are only too glad for him to be saddled with sole responsibility, and Hitler’s appearance in the spot-lit centre of the stage is but the indispensable prelude to his tactical repudiation. It was the German generals who sent the Kaiser away when defeat was clear. The guilty man, thought the world, had fled to Doorn, and the German generals were well content to have the world live in that delusion while they began to prepare the blueprints and jigs of secret rearmament to prepare for the next war.

Hitler, too, will be sent away in one form or another, and in my opinion this will happen in 1942 or very soon after. “His was the sole guilt, the generals will say, “and we have banished him or

had him shot. What more would you want?” That will be the most dangerous point in this war from our point of view. We shall be back to Prince Max of Baden and Hindenburg.

If war is ever great and glorious, the Russian recovery and counterblow are among the greatest and most glorious things that war has ever produced. I have hoped for them since June. They spell defeat for Germany. From this moment every German knows that the last hope of Victory has gone. From this moment the German generals begin to preconcert their other plans for w nning the Peace, if they can after they have lost the war.

TT IS almost gruesome to remark how history repeats itself. When Hitler began his march on Moscow, with patent deliberation, on the very day that Napoleon chose for that same venture, I avoided drawing any historical parallels. It seemed certain that Hitler must be sure of his prey. But now, in the winter, he finds himself in precisely Napoleon’s plight. Not only that, but Napoleon confided to a companion, General De Caulaincourt, whose memoirs were not published until 1935, his fears lest Britain should profit from his disaster by “making expeditions against my coasts, now at one point, now at another, re-embarking as soon as forces can be collected t> fight them and then

striking at some other point. That would make the situation insupportable.”

Now, as Hitler falls back from Moscow, we are doing that very thing; striking at his forces in Norway, here yesterday, there today, who knows where tomorrow? I can hardly convey here how warming these raids are to British hearts. The Commandos bred and trained first and foremost by Admiral Sir Roger Keyes, one of our greatest leaders of the last war—are men trained to a hair, who will stick at nothing. In them the spirit of Elizabethan England revives. They are the best we have. It is only tragic that Sir Roger Keyes’ own son, at the age of twenty-four, should have been killed leading one of the most reckless and fantastic

In Libya, too, we have struck. The battles of this war have so much swayed to and fro, such amazing things have happened, that the world possibly never realized the full magnificence of General Wavell’s victory in Libya just a year ago. Then but six months had passed since the disaster in France, since this little Island was left alone to face such mighty foes. This Island itself was still scantily defended against the daily awaited invasion, yet General

Wavell’s little army, far smaller than the one it destroyed, drove the Italians headlong out of Cirenaica, surrounded them, smashed them, took prisoner 135,000 men and 1,300 guns, all at small cost to itself.

In that stupendous exploit of 1940 the British Empire showed how it could kick. But then General Wavell’s few men had to be depleted for the effort to succor Greece and save Crete, and Rommel’s Afrikakorps recaptured Cirenaica. Today General Wavell is in the East, battling the Japanese, but General Auchinlêck has retaken all that ground, and unless the portents lie,

WAVELL’S triumph was a magnificent gesture, the proof of what a few men can do. Auchinleck’s victory has another meaning. He had to defeat Germans not Italians. It was the first time in this war that British troops from all parts of the Empire, with their allies, have been able to meet the Germans with equal arms. They are winning. The lesson, and that of the Commandos, is clear to every British heart.

In the English countryside where I live, I meet Canadian soldiers every day. They are tired of waiting. They pine to fight. It is a sorrow to them, and to all of us, that the first Canadians to go into action save for the brief venture to France, were the frail outnumbered forces in Hong Kong.

They are on tiptoe to avenge that setback, anywhere and any time they can, and I do not think they will have overlong to wait. I do not envy the Germans when they meet these Canadian troops.

So as 1942 begins, this little Island is in the best of heart. “America is in.” How good those words would have sounded a little while ago. They sound good now, but their message of good cheer was undoubtedly a little dampened by the unhappy outcome of the first encounters. However, everyone knows that that is but a setback, that from the day the United States entered the war its outcome, soon or late, was put beyond doubt. For weight tells, and the weight is now on our side.

The spread of the war to the Pacific has had one great result. Until now the anxiety of the world has been for this Island. The sympathy of people in the Dominions,

from Canada to South Africa and from Australia to New Zealand, has been felt by every single person here in some form or another. Now it is our turn to feel for them, for the danger approaches Australia and New Zealand. At least the most comforting and inspiring thing in the bitter dark days was the sight of those men from overseas in this country, the knowledge that they were here to fight at our sides if the blow fell. Perhaps—who knows—the time may now come wrhen men from this country will go overseas to some threatened Dominion to repel a danger there. If it should, with what eagerness would we go !

Meanwhile the people’s faith in the future is steadily rising and cannot be dampened. They believe that when the last day of 1942 draws to its end, not one or two thousands, but ten thousand people will sing on the steps of St. Paul’s. 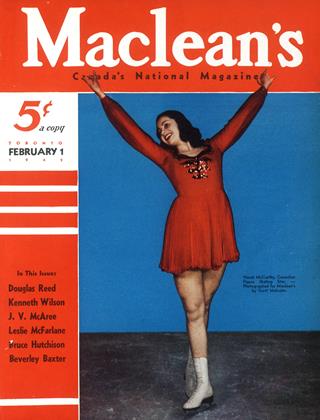