Early in the war some C.C.F. speakers in British Columbia voiced grave doubts about the wisdom of Canada’s joining in the war at the side of Britain. Now the C.C.F. is attacking what it used to call “the capitalist parties which took Canada into the war” for not fighting hard enough. To some, the about-face could be purest political hypocrisy; but observers who know the men responsible for it claim it reflects a sincere change of viewpoint. Mr. Winch says he doesn’t believe the maximum war effort can be achieved on the existing economic basis, but that he will not obstruct the war effort merely to further his economic views.

Real trouble was brewing over the resident Japanese problem until the Dominion Government announced plans for removal from “protected areas” on the Pacific Coast of “all enemy aliens of whatever origin” unless they hold police permits to remain. Vancouver estimates that some 5,387 of the coast’s 23,428 Japanese will be affected - 2,395 fathers included, meaning the temporary breaking up of families unless they can afford to move inland together.

The Ottawa move has been endorsed generally in British Columbia as a sane solution, even by most Japanese. It includes the formation of a civilian corps of Japanese workers for “projecta of value to the national cause.” Japanese purchasing of gasoline and explosives comes under restriction, their possession of radio transmitters and cameras is prohibited, and Japanese coastal fishing has been banned.

THERE is a puzzled unit of the Veterans Guard of Canada on duty at a civilian internment camp somewhere west of Calgary. The camp was originally of the rough and ready but comfortable pattern common to such temporary wartime institutions. I hen on twenty-four hours notice the approximately 700 civilian internees were bundled aboard trains and shipped east. While the guards looked on curiously, a swarm of workmen invaded the camp, built new sleeping huts and dormitories, installed hot and cold showers, new heating and cooking equipment, improved the hospital. The story was that the camp was being made ready to house high-ranking enemy prisoners of war.

The old soldiers determined to turn out the smartest guard any Prussian officer had ever seen, to greet the new arrivals. They did and out of the special trains which rolled into the camp siding streamed not German officer prisoners but a motley crew of civilian internees. Even more puzzled than their guards were the internees upon discovering the “luxury trimmings” provided for them puzzled but happy.

Behind the mystery lay a Class A-l Ottawa headache, with international complications. A group of German officer prisoners, originally housed in a sanitarium near an Ontario summer resort, had been as content as prisoners can be until they were moved to a historic Canadian fort, recently remodelled. The German gentlemen did not like their new quarters, objected to being enclosed within high stone walls. Their complaints reached Germany, via the official Swiss inspector of the International Red Cross, and reportedly resulted in the removal of 2,500 imprisoned British officers to a camp in Poland.

So orders were given to remodel the Alberta camp in a manner suited to the accommodation of officers, as prescribed by international convention— though authorities say talk of its becoming a “luxury camp” is greatly exaggerated. But before the prisoners were transferred objections were again raised through the Swiss officials. The only apparent argument was that the proposed camp was too far away—the prisoners still preferred Ontario’s tourist country to settling in the shadow of the majestic Rockies.

At the last moment the officers were sent to a former boys’ school at Bowmanville, Ont., to which they have apparently as yet raised no serious objections. And back to Alberta were trundled the 700 civilian internees to be greeted by the smartest—and most bewildered— guard any Prussian officer had never seen.

loss of her children and will not be comforted. Census figures show the provincial population to have decreased 34,038 in ten years. Authorities say the natural increase for the ten years should have been 129,000. This indicates an actual loss of close to 163,000 citizens. With Ontario and Quebec still to be heard from at time of writing, all other provinces have reported increases; Saskatchewan is likely alone in her misfortune. Saskatchewan did show an increase up until 1936, when the total was 931,547 as compared to 921,785 at the 1931 census. The 1941 total was 887,747.

These figures might be made much of by political opponents should Liberal Premier “Billy” Patterson decide to go to the polls—but the current agrarian discontent suggests he won’t, at least before fall. Election talk may be wishful thinking by the C.C.F. Well-organized, aggressive, elated by their party’s having won opposition standing in British Columbia, the C.C.F. is flexing its muscles and talking victory under the leadership of Weyburn’s T. C. Douglas. There is little sign of Conservative revival. Present standing: Liberals 36, C.C.F. 11, Social Credit 2, Unity 2.

THIS province has learned the meaning of tragic suspense. It started when Hong Kong was besieged. Everybody seemed to know someone in the Winnipeg Grenadiers, and all Canada knew that the Grenadiers were in Hong Kong along with the Royal Rifles from Quebec.

When Hong Kong surrendered the tension increased. Soldiers’ relatives started at every step on the porch, every telephone ring. Rumors flashed everywhere. One, that the casualty lists were being delayed so homes wouldn’t be saddened at Christmas. Another, that the newspapers already had the lists. A third, that some relatives had already been notified. The press did its best to squelch the rumors. Later the Federal Government issued a statement that relatives would be notified the moment the lists were received. The delay continued and finally the squall of rumor blew itself out; but for Manitoba—as for Quebec—the waiting went on.

J. V. McAREE, “Fourth” Columnist of the Toronto Globe and Mail, believes that the bombing of Toronto is as remote a possibility as that “the Chippewa Indians should stage a rising and capture Winnipeg.” Disagreeing with him are the hundreds of Ontario citizens, particularly in the Toronto region, who regularly attend training classes held by the Civilian Defense Committee. None disagrees more strongly than Ontario’s Attorney-General Gordon Conant, the power behind antisabotage and A.R.P. work in the province.

Gordon Conant has been bursting with war-winning activities of his own devising ever since war began. He threw a hastily organized Veterans Guard, armed with shotguns, around power plants, bridges and reservoirs, before Ottawa got into action. He organized a Volunteer Civil Guard (critics called it “Conant’s Army”) and most recently a picturesquely garbed Ontario Volunteer Constabulary (critics echoed “Conant’s Commandos”). The Attorney-General took on one ambitious project after another, burning up the wires to Ottawa as he went, driving his staff à La Guardia.

On the theory that it can happen here, he has placed Civilian Defense Committee foremost of all such activities. Chairman of the Committee, he bombarded Ottawa for supplies until he had quantities of stretchers and splints stored at Queen’s Park. He gave the Toronto region two summer blackout tests, announced there’d be no more till Ottawa sent him real air-raid sirens. Instead, unspecified amounts of Ontario equipment, including department of forestry water pumps, were rushed to British Columbia when war came to the Pacific.

One day in January Mr. Conant beamed happily at fifteen shiny ne.w air-raid sirens, then sounded off shrilly himself when his technicians reported that the sirens wouldn’t work—missing were the automatic wailers and the starter controls. Over the wires went another wail to Ottawa. Ian Mackenzie said that the order for the needed parts had been placed, promised to put the pressure on. Mr. Conant, describing the sirens as “engines without spark 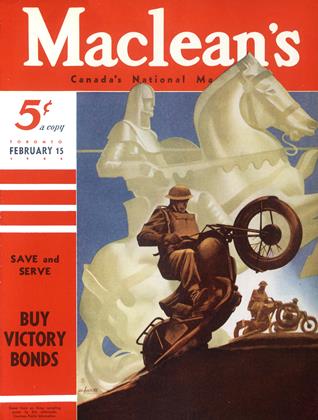