Humble—A policeman stopped a negro driver and demanded why he ran though a red light. “Didn’t you see that red light?” the officer asked.

“Well, why didn’t you stop?” the officer asked. “I saw the white folks going on the green, so I thought the red was for us niggers,” the darky replied. He was excused.—Niagara Falls Review.

Peacemaker — He was a man of peace, and when he came upon two youths fighting in a back street he pushed through the crowd and persuaded the combatants to desist.

“Let me beg of you, my good fellows,” he said, “to settle your dispute by arbitration. Each of you choose half a dozen friends to arbitrate.”

Half an hour later he returned and was horrified to find the whole street fighting.

“Sure, sorr,” was the reply, “the arbitrators are at work!”—Sherbrooke Record.

Sight Unseen—He wanted to join the Navy, but the doctor grimaced when he discovered that the would-be sailor’s hearing was far from perfect.

“But surely good eyesight is more important,” pleaded the young man, “and mine is fine!”

The doctor switched on a radio set and a man’s voice came through. “What is that fellow talking about?” asked the doctor, wishing to test the aspirant’s hearing again, “Oh, er, I—I can’t just hear him,” replied the young fellow, “but he’s wearing a dark grey suit!”—Montreal Star.

Precision Worker—A bricklayer was building a wall when a man in overalls came along and passed some remark about bricklaying in general. The bricklayer, somewhat annoyed, asked sarcastically, “And what do you do for a living?”

“I’m a precision fitter,” the other replied, “and in our trade we have to work to a thousandth of an inch.” “Really?” said the bricklayer. “And ’ow many thousands are there in an inch?”

The fitter scratched his head, and then replied, “Blimey, millions of ’em.”—Kingston Whig-Standard.

Almost A Record —He was genuinely enthusiastic about the virtues of temperance, but his face made people doubt him.

Toward the close of his lecture, he squared his shoulders, held his rather large head erect, and said; “I have lived in this town all my life. In this town there are fifty-five public houses, and I am proud to say that I have never been in one of them!” Then came a voice from the back: ' “Which one is that?” — Sarnia ; Observer. 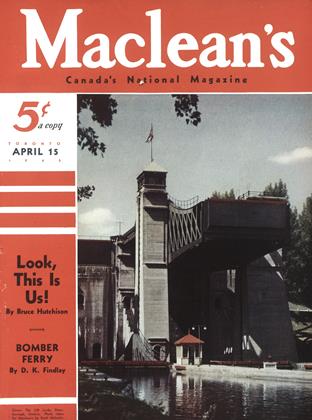