Australia Buckles Down CLIVE TURNBULL May 1 1942

MELBOURNE, April 2 (By Cable). As the war situation becomes graver for Australia so does Government control tighten. The Australian citizen who once counted himself one of the freest individuals in the world is now regulated in his work and his recreation, a drinker of rationed tea and a user of rationed gasoline. The Federal Government has assumed powers for the complete mobilization of the services and property of the Australian people.

In effect many of these powers are reserve powers. Outwardly the tenor of Australian life is not yet greatly changed, although there are certain manifest alterations brought about by the war. Nevertheless the Curtin Government’s "new economic policy,” as it has been called, is in its way effecting a quiet revolution beneath the surface. There are some critics of the Government who profess to see in it the shape of things to come and who wonder to what extent the abnormal situation of today can be used to give effect to planks of the Labor platform which that party has hitherto failed to have implemented.

The Australian citizen who once upon a time fulfilled most of his obligations to the state when he lodged his taxation returns has now become a form filler. Every month he makes written application for his ration of gasoline, at the same time producing a special certificate and a certificate of title for the vehicle. If he owns the average American car he gets coupons for about four gallons, just enough to keep it in running order. Meanwhile, his wife has filled in a tea registration form entitling every person in the household to buy two ounces of tea from the grocer each fortnight.

These are the only commodities in general use officially rationed. In both cases the reason is obvious. Shipping shortages or enemy action have cut off supplies, and neither commodity is produced in Australia. It is not improbable that some form of clothes rationing will eventually be introduced. Some stores are already refusing to supply more than an arbitrary number of certain sorts of garments in order to spread their stocks as far as possible. The effect of materials control is felt indirectly by the public in the difficulty or impossibility of obtaining certain paints, hardware and building materials, etc. New building is forbidden within certain metropolitan areas, partly to conserve labor. No new telephones are being installed. Field glasses have been requisitioned by the Commonwealth for the use of the forces and certain high quality cameras may likewise soon be taken over.

Tobacco and cigarettes are fairly difficult to obtain in normal quantities and will, no doubt, be

still more so. Matchboxes, in order to conserve chemicals, have the striking surface on only one side.

Importation of many articles deemed to be luxuries has been prohibited or curtailed since the early months of the war. To the totally prohibited list were added recently brandy, whisky, gin, rum and other spirits and wines, carpets and cutlery. The effect here is principally on the luxury trade, for ninety per cent of the whisky drunk in Australia, for instance, is Australian made.

The Australian citizen, in addition to his petrol and tea forms, has lately filled in two others. One is in acknowledgment of the liability of all men from eighteen to sixty to some form of military service. The other, filled in by women, also serves in the compilation of a national register and as a basis on which identity cards are being issued to be carried by all adults. The classes so far called up for military service in Australia and its territories— there is yet no compulsion to serve elsewhere—are single men from eighteen to forty-five and married men eighteen to thirty-five, unless specifically exempt.

THE GENERAL economic policy of the Government stems from a pronouncement made by Prime Minister Curtin in February, when he announced the gazettal of regulations enabling the Government to require any person resident in

Share trading ceased in February. Property transfers were restricted except by permit, Government and semi-Government bonds excepted. Profits were limited to four per cent, wages generally pegged at existing levels, and the Commonwealth Bank was empowered to fix interest rates of all types.

The willingness of the community to accept restriction, however, did not necessarily imply agreement on what restriction was required. There was dispute about the assessment of the four per cent profit. Did it mean, critics asked, four per cent on the original subscribed capital or four per cent on all shareholders’ funds? Obviously the number of people holding shares in great companies who had bought them at the original price of issue was fractional. The majority who had bought at current market valuation would receive far less than four per cent. Suppression of share trading was likewise condemned as needless and valueless interference with the economic structure of the nation.

The Government compromised. Early in March it was announced that Stock Exchange trading would be resumed subject to a fixed maximum and minimum price range and the qualification that shares must be held for five months before being resold. It was also decided that the limitation of company profits to four per cent on capital employed should not take effect before July 1, so a first-class political storm was averted.

Meanwhile the Government altered the system of exemption from military service, which had been modelled on the English system of reserved occupations. Industries have now been graded in order of priority in accordance with their estimated value to the national effort. Employees in low priority industries may be freely called up for national service and such industries will be able to engage new male labor only through Government agencies. As all such labor is needed for the fighting services and munitions, however, little or none will be available for these low priority industries. Thus the Government will achieve its aim of shutting down or curtailing unessential industries and diverting labor to vital occupations.

Such is the system in theory. It is yet scarcely under way and time lags have occurred between the release of men from nonvital and their absorption into vital industries. These are matters of organization, however, and presumably will be righted in time. So far the changes have been largely voluntary, the natural redistributions of labor and industry accelerated rather than directly broughtabout by Government action.

GENERALLY, ail the maze of new regulations has been well received. If there is criticism it is usually criticism that the Government has been hesitant in its imposition of penalties. Absenteeism in industry, for instance, has not been adequately dealt with. A small section of the coalminers has been openly defiant in refusal to resume work, and this int ransigence remains a problem.

The people of Australia, like the people of Britain, willingly through their parliament surrendered their traditional liberties so that the war for the ultimate preservation of those

liberties might be the better waged. They want and demand, therefore, firm control in this time of crisis. They are critical, not of petrol and tea rationing, but of the fact that such rationing was not introduced earlier with greater benefit. They are critical, not of the man-power regulations, but of weakness in their application. They have told the Government to be strong, and have given it powers to be strong, but old political currents still run and here and there there is a timid harking back to the equivocations of peace. Generally, however, the public is satisfied with what is being done. If the Government falls into disfavor it will be not because of what it has done but because of what it has failed to do.

An instance of this will of the community was the insistent public demand for the cleaning up of the liquor traffic. Alarmed because the industry appeared untouched by the war, because in some places the liquor laws were being openly defied and because drunkenness was occurring among irresponsible elements, the people demanded action.

Both federal and state action has now been taken—liquor control is normally a matter for the states. Production of beer has been cut by one third and various restrictions have been placed on its sale in bottles, designed not only to prevent abuse but to put the liquor industry into something nearer proper perspective. These restrictions are welcomed by the vast majority of the community. Some attempt has been made by enthusiasts to raise the question of prohibition, but there is no sentiment for it.

Today Australia, once an agricultural and pastoral country, presents an increasing picture of industrialization. For side by side with the raising and training of the armed forces must go the ever-increasing production

of the material of war. The year 1942 finds in the factories thousands of workers who had never before seen the inside of a machine shop. Such are the ex-farmers who make up a large proportion of the workers in one shipyard. To these must be added the thousands of women workers in munitions factories, many of whom had not only no experience of factories before, but had never worked at all. So today the trains and streetcars, overcrowded because the gasoline shortage has put automobiles out of commission, are filled with factory workers and the streets with men in uniform—Australian and American.

It is a solemn, solemn world that the Australian lives in, husbanding his cigarettes, carrying parcels unwrapped to conserve paper, hurrying to get home before the precautionary “brown out” or to add a few touches to the slit trench that he is digging in his garden. But these things are small compared with what other peoples have to suffer, and he bears them willingly if they will help in the all-dominating task of making his country secure.

Australia is not yet on a total war footing but it is getting that way. Such adjustments are not always easy for a democracy. Today Japanese bombs in Darwin and points north give full support to the processes of logic. 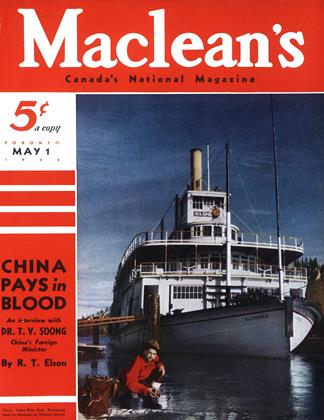