THE STRIKING characteristic of wartime shipping on the Great Lakes is that, in the main, its operators are handling the greatest lake tonnage in history with the same ships they had ten years ago.

On the upper lakes the vessels which were built in places like Midland, Collingwood and Port Arthur from the start of the century to 1926 or thereabouts, carry the load now. Tanker fleets have been built up since the ’twenties. There are a few new Diesel-driven barges on the St. Lawrence and on the lakes, a few ships with little or nothing above decks but a midget funnel and a collapsible mast, built to navigate the low-bridge U.S. barge canals. Freight-handling methods and navigation aids have all improved. Fleets have been modernized for package freight by installation of electric elevators and other equipment. But almost all of this was prewar and most of it was predepression. Good ships, fortunately, have long and useful lives and the freighters which, a few seasons back, were lying listlessly in depression-hit harbors are all back in service and proving to be worth their weight in warships. They have shed their rust as a duck sheds water.

The international Great Lakes’ system has been considered, from the transportation standpoint, as rating the status of another ocean. Mileages here are misleading as they are in other fields and today it is time which counts. By fresh water, Montreal is 48 hours from Toronto, though an express package freighter will cut this figure by five full hours. I" rom Toronto to the far end of the Welland Canal at Port Colborne is twenty minutes or so by plane, but twelve hours as the colliers do it. Another twenty-four hours is required to make Detroit and from that point to the lake head, Fort William and Port Arthur, takes fifty-five hours of steady going. Between Montreal and Port Arthur stretch close to six twenty-four-hour days of water.

On April 1, the big iron ore carriers were already loading at Duluth ánd the long fresh-water procession had started down the lakes, trailing smoke, while the skating was still good. The ships of the ore fleets, U.S. and Canadian, are bigger than ocean tramps, just as unlovely, just as tough and just as plodding

though a salt-water skipper would rate the job of handling one as a nightmare. To such a navigator they are among vessels what a dachshundstyle Newfoundland would be among dogs. But they will keep on moving like a parade, day and night, making sixteen miles an hour or so and handling perhaps as much as three million tons a week, never stopping until next winter has iced their decks and upper works and they look like enamelled steamers.

Only as fast as these fleets on inland waters pile up ore from the iron ranges at the blast furnaces can the mills, in turn, keep steel supplied to the war plants and the war plants speed up the flow of ships, tanks, guns, planes and supplies to the battle fronts on land and at sea. But while the iron ore movement may be the most spectacular contribution of lake shipping to the war effort, there is also greatly stepped-up traffic in grain, coal, oil and many other bulk cargoes, in addition to package freight and deck loads of army vehicles on the way to ocean ports.

For wartime purposes, the Great Lakes’ routes link key inland industrial centres directly with the Atlantic supply line to overseas. They provide a variety of shuttle routes extending the space of half a continent, over which vast tonnages of essential materials move between U.S. and Canadian production points. There have been changes in routes and cargoes which will make interesting reading at some future date. Freight now travels by fresh water all the way from the port of New York to the lake head, coming crosscountry by barge to Montreal. Canadian ships trade today with war cargoes between U.S. lake ports which, if you know your coasting laws, you will realize was impossible before the war.

Unfortunately this great waterway is at critical points almost embarrassingly short of water. At Sault Ste. Marie, connecting lakes Superior and Huron, and at the Welland Canal, which takes the freighters down from Erie to Ontario, whole fleets including the largest vessels on fresh water lock through with about the same fuss, relatively, as is involved in ushering passers-by through a revolving door. But on the old canals of the St. Lawrence, six in all and forty-five miles in length, the water has in recent years

been too shallow at times to take even the fourteen-foot vessels for which the canals were built; and the locks will handle no ship over 252 feet long and forty-five feet wide. The lake fleets are divided, therefore, into the bigger upper-lakers which can never get far enough down to smell salt water and the canallers which, travelling the narrow water lanes built beside the St. Lawrence and at times out of sight of it, often startle touring motorists as they appear to move slowly and serenely through open fields, presumably navigating on a heavy dew. These are the hard-bitten little ships, however, which meet the ocean freighters every trip and tie in water traffic on the seven seas with that on the five big lakes.

Curiously, Canada has long had both the biggest ships and the biggest fleet under one management on the Great Lakes. In the immediate prewar period Canada Steamship Lines operated 104 vessels of all classes and sizes. Queen of the lake

freighters is the S.S. Lcmoync, built in Midland, 613 feet long, which set world records by carrying 571,960 bushels of wheat in a single cargo and 16,577 tons of coal on another noteworthy voyage. In appearance, she is typical of the great bulk carriers, long-hulled streaks of ships with ten to twenty-five hatches the length of their decks, stoutly built, with engines aft and a high bridge forward. Even after they have seen them, some deep-sea men still doubt the existence of these fresh-water mammoths. Similar to them are the selfunloading colliers with long, swinging cantilever arms on deck which reach out when the ship docks and begin to pour tons of coal ashore almost before the lines are fast. The package freighters, 300 to 400 feet long, are closer to ocean tramps in appearance and the lake tankers are almost identical with the ocean types, though smaller.

The crews, like the ships, belong to the lake routes and live for them as well as on them. Their homes are

scattered from Superior to the sea and they are alike only in their attachment for fresh water. There are the French from the banks of the St. Lawrence who seem to know its currents by instinct and the Scots from Georgian Bay who began their careers by hanging on to a deck railing when they learned to walk. But almost every lake and river town supplies its quota.

In the lean depression years, they had a thin time. Ships were fewer and seasons shorter. Cargoes were scarcer and there were even midseason layoffs. Not a few men with captain’s papers took any kind of available job in those days rather than leave the lakes. For all of them, the war was a call to action. They came back to their posts again. They know their ships as well they know their own children and many of them feel more at home on these waters than in their own backyards. That is one very good reason why they can meet freight traffic demands greater than any they have faced before. 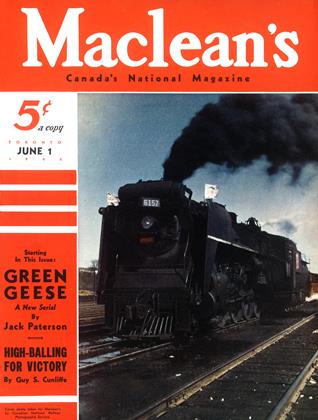