HERBERT AUSTIN FRICKER was under scrutiny of critics who had known his predecessor’s outstanding work for two decades. He was conducting the Toronto Mendelssohn Choir in his first rehearsal—the work, “I Am The God Thor.”

“I understand that the yam is a sweet potato,” he said evenly, as the critics leaned forward to listen. “I notice that you are all singing about it. T Yam The God Thor’ is, I believe, not the sentence printed in your books.”

From that autumn evening in 1917, a short time after he arrived from Leeds, England, to succeed Dr. A. S. Vogt as conductor of the internationally known Mendelssohn Choir, Herbert Fricker was established as an autocrat. It is a reputation he has not tried to avoid.

“A conductor must be a dictator,” he told me from the depths of a big chair in his den a few weeks ago. “He must know what he wants and he must know how to get it. Then—and here is the most difficult part—and he must insist upon having it.”

Dr. Fricker—musical doctor, honored thus by the University of Toronto—has been insisting with outstanding success during the last twenty-five years.

The atmosphere of his den reflects his personality better than words. His desk is littered with unread letters, invitations to be guest of honor at musical gatherings, detective stories, concert programs, pipes, matches, ash trays, music. He is a small man but has admirable poise, so that his high shelves of books—a great number of them on Johann Sebastian Bach, his favorite composer—do not dwarf him. Pictures of musicians cover the walls.

Last February 23, eleven days after his 74th birthday, Dr. Fricker became fifty petcent retired. He resigned from leadership of the

Mendelssohn Choir, but retained his position as choirmaster and organist at the Metropolitan United Church in Toronto. The Mendelssohn’s two hundred-odd voices will merge with the Toronto Conservatory Chorus under Sir Ernest MacMillan.

Work of the Mendelssohn Choir — outstanding for Dr. Fricker’s admirable leadership and the intense loyalty the great amateur organization gave him—has evoked mass appreciation on a scale almost impossible to realize without spending a few days reading letters and reviews. To me one of the most impressive of these comments was in a few simple words contained in a letter from a Toronto admirer. She told of one woman saying to another after a concert: “We shall never hear anything like that again in our lives.”

That is the lay reaction. Professional critics have been just as enthusiastic. Deems Taylor once wrote: “One might write columns about the glorious quality of the singing and the superlative interpretative feats of the conductor and chorus.”

Dr. Fricker’s long and honorable musical career almost ended before it began. When he was born, third of a family of twelve, a doctor pronounced him dead. When he finally showed signs of life, somewhat premature funeral arrangements were cancelled.

At the age of eight he entered the choir at Canterbury Cathedral and was a chorister there until he was fifteen, when his voice broke. Lost without music, he began to strum the piano. His father, a schoolmaster, found him a teacher. Herbert began to get up at seven to practice, then at six, then at five. Often moonlight still was streaming into the room when he crept downstairs to begin his day of musical concentration.

Six months later he began to study organ. In October of the next year—barely fifteen months after he was given his first piano lesson—this

Continued from page 20 brilliant first phase of his musical career was climaxed by his appointment as deputy organist of Canterbury Cathedral.

His career unfolded rapidly. In 1891 he was given a post as organist at Holy Trinity Church in Folkestone and in 1898 as city organist at Leeds and later choral director of the great Leeds Musical Festival. He founded the Leeds Symphony Orchestra in 1902 and conducted it until he came to Canada.

One night in Leeds, just before a concert, his trousers ripped as he leaned over to tie his concert shoes. There was no time for a mending job, so safety pins were used. The improvisation was successful, but Dr. Fricker remembers: “Never have I conducted with less movement than I did on that particular evening.”

A rehearsal of Sullivan’s “The Golden Legend” provides another amusing memory of Leeds. Sir Arthur Sullivan was conducting the choir in rehearsal. Toward the close, the heroine sings: “I come not to argue but to die.” Something went wrong, and Sir Arthur shouted: “Letter D,” then jumped with amazement when the choir broke into hearty laughter.

IN 1917 Dr. Vogt, founder of the Mendelssohn Choir, visited England. He was so impressed with Herbert Fricker—who meanwhile had received a musical bachelorship from Durham University and a Master of Arts (honoris causa) from Leeds University—that he asked him to come to Canada as director of the Mendelssohn Choir and organistchoirmaster at the Metropolitan Church in Toronto. In August, 1917, Dr. Fricker arrived in Canada.

He made his debut with the Mendelssohn Choir in Toronto in February 1918, and drew immediate acclaim. Among the orchestras with which the Choir was associated during Dr. Fricker’s leadership were the New York Philharmonic, the Philadelphia Symphony under Leopold Stokowski, the Pittsburgh orchestra under Victor Herbert and the Cincinnati Symphony under Fritz Reiner. He was elected president of the Canadian College of Organists in 1925.

From much of Dr. Fricker’s recollections the impression is left that between cathedrals and music lessons he had little time for the commoner pursuits. He did. He played billiards with enthusiasm, played with musical groups at smokers, did a little boxing and golfing and generally packed into his early manhood more extra-curricular activity than many people find in a lifetime.

The most pungent (and most incorrect) appraisal of his outstanding organ ability was given one day in Leeds by a charwoman, who dusted the seats almost every day while Dr. Fricker was practicing. One day in the practice period the organ was being tuned. A relative of one of Dr. Fricker’s pupils was in the hall at the time, and remarked

jocularly to the charwoman: “That’s a funny tune they’re playing up there.”

Dr. Fricker en joys good music if it is bright and lively. He says he knows only one way to handle a piece of music he does not like—and that is get through it as quickly as possible. He has a keen ability for criticism. He recalls with enjoyment the time that the dull cantata, “The Witches’ Daughter,” was rechristened “The Ditches Water,” by unenthusiastic choristers.

“It is a silly thing, hut many people think that if we are studying serious music, we must he serious,” he told me. “Actually it often turns out that if the serious note issustained the music becomes dull. There must he vitality in music. If it doesn’t really live, it is not good at all. The older I get the more I find that music can he anything, hut not dull.”

Once someone asked his wife the name of his favorite hymn.

She thought a moment, then replied: “I don’t know. The only ones I’ve heard him mention are those not sung properly.”

An eight-year-old granddaughter, Ann, supplies Dr. Fricker with many of his opinions on such comparative modernities as the effect of radio on musical education.

In this regard, he believes that “broadcasting does more good than harm,” but also told me that uncontrolled access to radio could ruin a child’s musical perspective. His wife spends a good deal of time turning off their home radio for Ann’s sake.

Ann is taking piano lessons and has ability. If she did not like music, the Frickers would not force it upon her. Dr. Fricker believes that threats and bribes are of no use when children are opposed to musical instruction.

In England, a pianoforte pupil confided this gem of information to him: “Do you know, Mr. Fricker, that I can play the pianoforte very well indeed, but I cannot manage the flats and sharps.” Dr. Fricker cannot remember his reply, but believes that if the statement were made to him today he would say: “Never mind the flats and sharps. By leaving them out your music will be modern—very modern indeed.”

However, he is not complete in his condemnation of modern music. He reminds himself and others that when the later compositions of Beethoven, Wagner and Brahms were first performed, many music lovers of that day did not understand or appreciate what to them was modern music. So he says, “We can only hope and trust that among the mass of composers of today a genius may be at work composing music for coming generations.” Incidentally, his own place in that “mass of composers of today” is an important one. “Three Fishers Went Sailing,” which may be described as an elevated type of folk song, is one of his better-known compositions. 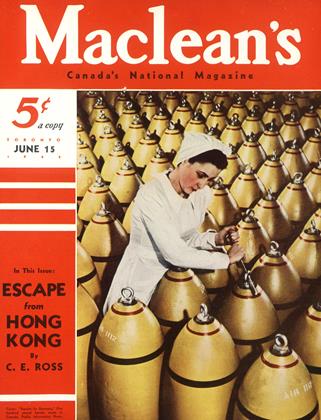