THE WAR has come to North America, as is clearly demonstrated in three assorted wartime mischances by operatives living in widely separated areas. From Dawson, Yukon Territory, an agent reports strange goings-on at Skagway, Alaska, on an evening when a first alarm of fire rang out upon the midnight

air. The watchman at the power plant mistook the fire signal for an air raid alarm. Working rapidly, he pulled switches right and left, cutting off every light in town. Skagway’s air raid alarm signal is in charge of a woman citizen. When the lights went out suddenly without warning, she thought there must surely be enemy planes overhead, and at once she turned on the siren. Back at the power plant the watchman heard the signal, took it to be the “all clear” and immediately restored light to Skagway. While this little game of now-you-hear-it-now-you-don’t was going on, the house for which the fire alarm had originally sounded burned to the ground.

In a church hall at Cranbrook, B.C., a group of women were being instructed in first aid. So absorbed were the students in the demonstration that nobody noticed when one of their number rose from her seat and wavered unsteadily to the nearest anteroom, where she fell on the floor in a dead faint. Before any of the first aid experts found her the unfortunate sister had come to of her own accord.

And, during a mock air raid staged on Truro, N.S., by troops in training at Debert camp, one of the pseudo casualties was Claude Atkinson, who was supposed to have suffered a broken kneecap. Claude is well over six feet in height, weighs around two hundred and thirty pounds. His case fairly baffled the A.R.P. workers, who could not contrive to lift him onto a stretcher. The stretcher was too short for his length, anyway.

Charles Beaver, a fisherman living in Mushaboom, Halifax County, N.S., found an eighteenpound lobster, twenty-one inches long, in one of his traps. Beaver reached for the lobster. The lobster grabbed Beaver’s wrist. Beaver fell out of his boat. Oliver Levy, another fisherman, rescued Beaver from a watery grave with the lobster still clinging to his wrist; and anybody who thinks we made this up can read all about it in the Halifax newspapers of May twenty-first.

We know of a pilot officer of the Royal Canadian Air Force who is walking moodily around his camp these days kicking at loose objects, all because of things that happened to him while he was on leave in New York recently. First of all, a matronly woman, of the imperious or Boadicea type, hailed him as he stood on the steps of his hotel watching the crowds go by: “Porter,” she commanded, “get that boy out here with my bags at once.” Next thing the pilot officer knew he was riding on a Fifth Avenue bus beside a dear old lady belonging to the Mother Machree school of behaviorism. Smiling so sweetly at him, she said: “You know, I feel so safe when you men are driving; but I don’t like taxi drivers. They terrify me.” On another occasion the R.C.A.F. man was mistaken for a cop,

and for a member of the F.B.I. Most frequently and, he admits, rather deflatingly, New Yorkers thought he was an air cadet.

Maybe Mayor LaGuardia could do something.

Back in the summer of 1939, while Edward Southall was working as a bellhop in an Edmonton hotel, three gentlemen arrived, registered from Vienna, Austria, and asked for a guide to show them around the city. Edward Southall was assigned to the job. He borrowed the family car and drove the visitors from Europe all over the place. They carried fine cameras, took pictures right and left. Edward’s father, a veteran of the first World War, was dubious about the whole thing. “You’re driving three German spies,” he told his son. “You’ll see.”

That was Act One. Now Edward Southall is a sergeant air gunner with the R.C.A.F., has been in England since last October. Recently he wrote home to tell his family that father was right. The gentlemen from Vienna—all three of them— are prisoners in a British concentration camp, where Sergeant Air Gunner Southall has seen and identified them. Presumably the pictures they took of Edmonton are in Axis filing cabinets in Berlin; or in Tokyo. Or both.

An indignant Vancouver matron, whose daughter’s wedding was scheduled for the same date and hour at which a city-wide blackout had been ordered, telephoned City Hall protesting violently, and demanding that the blackout be postponed. A much-badgered municipal officer suggested that the lady notify Tokyo. “They might be able to do something for you,” he said. “We can’t.”

There might be a useful hint for poultry fanciers everywhere in the ingenious transportation method used by Mrs. C. N. Waddell of Red Deer Lake, Alta., to carry four setting hens to the Waddell place from the home of a neighbor living two miles away. Mrs. Waddell wheeled her baby carriage to the neighbor’s house, packed the hens cosily in boxes, put the boxes in the baby carriage and wheeled the baby carriage home again.

We can’t imagine what’s got into the postal services. In our review of current events for May fifteenth we noted the strange case of a letter delivered in Regina last February and postmarked as of September first, 1942. Now come two similar exhibits. One is a letter sent from England last November to Wawota, Sask., by a member of the R.C.A.F. and postmarked by No. 400 Squadron Royal Canadian Air Force with the date 28 Oct. 1951. The second is an advertising circular mailed in April by a Montreal firm to an address in suburban Verdun. This one was stamped by the Montreal post office Apr. 30 ’52.

Hey, fellers, wait a minute. Give us a chance to catch up.

Contributions to Parade should be of general interest, of recent origin, and refer to actual happenings within Canada or closely connected with Canadian affairs. Whenever possible items should be accompanied by some substantiating evidence. Accepted contributions arc paid for at regular rates. No contributions can be returned. 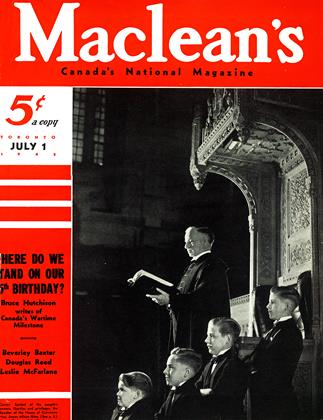