BACKSTAGE at OTTAWA THE MAN WITH A NOTEBOOK July 15 1942

IT TAKES a knowing eye to glean from Hansard the underlying meaning of the mid-June debate on conscription. Three groups with extreme views have emerged: the

There is nothing very startling about this. The views of these groups are extreme but they were anticipated. What is significant is:

1. An open cleavage of Cabinet opinion within these extremes.

2. The persistent refusal of Prime Minister King to make a clear commitment on future policy. (Cabinet hostility on this point is rising.)

3. The telling effect which the C.C.F. conscription-of-wealth campaign is having in Quebec.

A vital principle of Canadian constitutional government is that of cabinet solidarity. But in the House on June 16, Hon. C. D. Howe openly challenged his colleague Mr. Ralston on the best use of Canadian man power. For instance:

“We must consider whether we can contribute more to victory by continuing to be a principal source of munitions and supplies for the united nations or whether we can make our greatest contribution by limiting our production in order to send overseas every physically fit man ...

“Would we contribute more to ultimate victory by reducing . . .production in order to make all men available for service overseas?

“Would not the additional army so raised by Canada be relatively small in comparison with the vast armies now engaged in the war; and would not that be a relatively smaller contribution to victory as compared with the potential production which would be lost?”

Mr. Howe later denied “that we should or can stop increasing our armed services,” but his plea for a “balanced policy on man power” bears all the earmarks of an open protest to Mr. Ralston against further encroachments by the Army on present or potential workers for war industry. As Mr. Thorson later disclosed, the supply of available man power between twenty and

thirty is now virtually exhausted so far as the Army is concerned. Even by raising the age limit for trainees from thirty to thirty-five, the problem is little nearer solution since it is estimated that upward of 100,000 men may have to be called in order to produce the 15,000 draftees required by Mr. Ralston in J uly.

What has not been put on the record is the serious loss to production and worker morale of an increasing volume of training calls and “deferments” among warworkers. With a six-month deferment hanging over his head the worker in war industry is strongly tempted toward increased absenteeism. (“Oh well, I’ll be in the Army in a few months.”) And in hundreds of cases the fear of eventual conscription encourages skilled workers needed by industry to join up or accept the call without bothering to seek a postponement.

Mr. Howe has brought into the open a man-power argument which in ordinary times should and would have been settled behind closed cabinet doors. It is an issue which may divide the Cabinet as badly as the Prime Minister’s own wobbliness. One inference drawn by some observers is that Canada may be

forced to abandon plans for raising the eighth division if essential war production is to be maintained.

B ENEATH an air of outward calm, ruffled only by ration coupons and a reshuffling of senior officials, Canada's price ceiling ar1~ ministration is beginning to creak and strain. In the historic battle of beef it was hard to discovnr the winner. On balance Mr. Gardiner seems t) have got the best of the

argument in which the beef-loving consumer certainly took an awful walloping for a few weeks. Certainly the final upping of beef prices is a hefty breach in Mr. Gordon’s hitherto “inviolable” ceiling. What is clearly worrying price ceiling officials is the possible effect of the breach on other prices and on retail and consumer morale generally.

The reshuffling of Wartime Price Board officials is significant because it brings into the open a fact which has been evident to insiders for many months, namely that Number Two man of Canada’s price ceiling is 32-year-old James E. Coyne. Hitherto Jim Coyne has been merely an “assistant” to the chairman, a sort of general handyman to Donald Gordon. Now with the elimination of six or eight “assistants to the j chairman,” young Coyne becomes “assistant chairman” with no competitors.

Coyne is a Rhodes scholar from Manitoba who got his first big chance as assistant counsel on the Turgeon Wheat Commission of 1936. He had then been practicing law with his father (J. B. Coyne, Winnipeg) for two years. Since then he has had a meteoric rise as one of the most brilliant young minds in the Federal Government “brain trust.” Coyne was financial attaché at the Canadian Legation at Washington when Donald Gordon called him hack to Canada on the price ceiling job. Since then there has been no major price ceiling decision in which he has not played a part; and with increasing frequency Coyne has been calling many of the plays himself.

The other important move in the price ceiling administration is the

lifting of another brilliant young expert, M. W. (Max) Mackenzie, from his key job on Canada’s Foreign Exchange Control Board to become Chief of Supply, Rationing and Distribution. Mr. Mackenzie took Donald Gordon’s place as chairman of the management committee of the FECB. At one time he was in line for the chairmanship of the Price Board itself. In his new job he will advise Chairman Cordon on all matters relating to coupon rationing-

The man who actually worked out the mechanics of the sugar coupon plan is another brilliant youngster (also in his thirties) whom Donald Gordon called to Ottawa at the end of March. His name is S. Boyd Millen and his peacetime job is managing a family business which started by selling hardware supplies and railway equipment in Montreal back in 1869. He figures the whole plan can be introduced at a cost of about ten cents per head-—just one tenth oí what was proposed in an earlier ration coupon study last year.

Every effort is made to have your copy arrive on time — but wartime brings transportation difficulties which occasionally may cause your copy to be late. If so, we ask your indulgence. 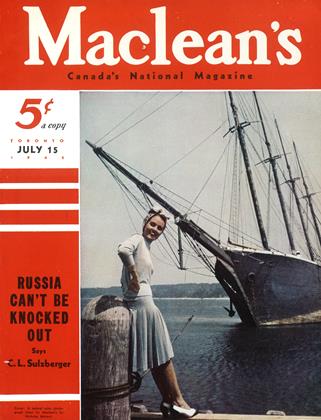