Backstage at Ottawa THE MAN WITH A NOTEBOOK August 1 1942

JAMES LORIMER ILSLEY is a modest, sober fellow. He shuns publicity and ostentation, is long on courage and common sense. A few months ago he confessed to a Capital Hill reporter that he was disappointed at the size of his income tax. “It only came to four or five thousand dollars,” he said; “I could afford to pay much more than that.”

It’s no secret now that, on or about September 1, the Federal Government (as Mr. Ilsley’s employer) will make very sure that Mr. Ilsley pays a lot more income tax than last year — about double his old rate. This may be some consolation to the one or two million Canadians who will also be feeling the weight of Mr. Ilsley’s 18,000 budget words in a few weeks’ time.

Actually, the budget wheels start grinding at Ottawa three to four months before the day of revelation. The first thing that happens is a private conference of the “inner circle” of the Finance Department in the East Block. The meeting is in Mr. Ilsley’s office in the southeast corner of the building. Others sure to be there are: Dr. W. C. Clark, the deputy minister; Dr. W. A. Mackintosh, the Government’s chief economic adviser; Dr. A. K. Eaton, the departmental tax expert; and R. B. Bryce, whose official title is “financial investigator.”

The meeting hears some rough estimates of how much money is likely to be needed; how much the existing taxes are likely to yield. “Boss” Ilsley gives his ideas as to the general line which should be followed to close the “gap.”

There follow a few weeks of general exploration and spadework within the department; then another powwow with Mr. Ilsley to see if the general approach is still in line with the Minister’s thinking. If this Minister approves, the inner circle expands. Matters of “fiscal” policy go down street to the Bank of Canada for consultation with Governor Towers and his staff. Matters of administration are thrashed out with key men in the individual departments affected — C. Fraser Elliott, K.C., Commissioner of Income Tax; Dave Sim, Commissioner of Excise; Hugh Scully, Commissioner of Customs and their boss, Minister of National Revenue, Col. Colin Gibson.

Most of the budget conferences are held at night. It is easier then to get departmental heads together. The meetings are not nearly as grim as might be supposed, largely because Mr. Ilsley has a grand sense of humor as well as plenty of common

sense. He is usually more than a match for his braintrusters and tackles the sobering problems of the world’s costliest war with resolution and good spirit.

Once the general “framework” is agreed upon, the job is largely one of “narrowing down” until resolutions can be framed and schedules approved. In the 1942 budget the various suggested income tax schedules were numbered alphabetically. By the time the final answer was reached, the tax experts had run out of vowels and consonants. It was numbered: X3.

High salaried bachelors and N.C.O.’s were about t!ie only ones to find a faint glimmer of hope in X3. Bachelors with big incomes found the “spread” between themselves and their benedict friends has narrowed, but tax officials were quick to point out that the opposite was true in the lower incomes where the big volume of potential tax dollars lay.

What may be done to help officers in the armed services who remain on duty in Canada is still undecided. The fact is that all N.C.O.’s and men, as well as officers who are overseas, are free from income tax. Officers on duty in Canada are liable. Under the new rates a warrant officer may get the same or a larger net income than a home service captain. The matter came before Cabinet several times, but no action was taken to smooth out the anomaly.

Yes, the Cabinet does finally have a finger in the budget pie, but there is little evidence that it challenged Mr. Ilsley’s onerous schedules very seriously. The heads of the Privy Council “great” were too high above the conscription clouds to bother much about a few billion dollars. And, as was aptly pointed out a few days later by thrifty Liberal George A. McLean, M.P., from Ontario’s Simcoe East, the Government is sti'l equally indifferent to tidying up its own loose spending. Thrift begins at home, said Orillia’s ScottishCanadian member. He listed (to an almost empty House) the duplicate services which still operate in the Parliament Buildings — two separate Post

ON THE manpower front, the battle between Munitions Boss Howe and ArmyCzar Ralston rages intensely. Mr. Howe openly pleads that the present big Army program jeopardizes munitions production. Col. Ralston says there isn’t a manpower problem merely because everyone is busy. He won’t believe the Army need yield ground until he’s convinced that there is much better allocation of presently employed workers in really vital jobs.

Meanwhile, both the Army ahd the production chiefs are quietly “upping” their programs. The first real pinch may come this summer if Army plans for a greatly expanded August “draft” materialize.

One important development now pending is a plan to bring all “selection” under one authority, namely the Minister of Labor, Hon. Humphrey Mitchell. There are now two separate bodies with authority to allocate manpower: (a) the

judicial draft boards operating under National War Services which decide whether a man should stay at his present job or be called up; (b) the selective service authorities now being granted increasing power in controlling the flow of all industrial and civilian labor. This authority rests with the Department of Labor and is exercised largely through the employment offices of the Unemployment Insurance plan.

stay at his present job or be.called up; (b) the selec tive service authorities now being granted in creasing power in control ling the flow of all in dustrial and civilian labor. This authority rests with the Depart ment of Labor and is ex ercised largely through the employment offices of the Unemployment In surance plan.

Some people at Ottawa say the two authorities will have to be merged somehow. But there’ll probably be a lot of scrapping behind the red baize doors of the Privy Council chamber before the change is actually made.

ping behind the red haize doors of the Privy Council chamber before the change is actually made.

From now on “manpower” may be an increasing misnomer. It is woman power that will really start to count.

Look behind the scenes at the ration coupon success. Of course, there were thousands of men

from service clubs, boards of trade, A.R.P. service and what not, who did a grand job in picking up the 8,000,000 application cards, but the spontaneous way in which 77,000 women offered to assist in the four-day job of transferring names to coupons is rated as unique and portentous.

The secret seems to be this: women have learned a lot about organization from their local clubs and activities, but seldom have they had a chance to show their stuff “en masse” in a national service of this sort. The zip and originality with which they shaped the national plan to their own local needs and conditions have made a big impression on a lot of dollar-a-vear men who got a chance to see the women in action. Certainly the next big move on the “manpower” front will be the mass entrance of women into business on a far larger scale than anything attempted heretofore.

Quietly, strong forces are at work to swing a nation-wide health insurance program at the “appropriate” time. There are seventeen different committees at work studying all sorts of angles of a difficult, complex and costly problem. It is estimated that sickness costs Canada $240,000,000 a year (about $23 a person), and that while health insurance may not do the job any cheaper it will do it better and more thoroughly. Scarcity of doctors and nurses may hamper anything being done before war’s end, but some plan is almost sure to evolve after that. 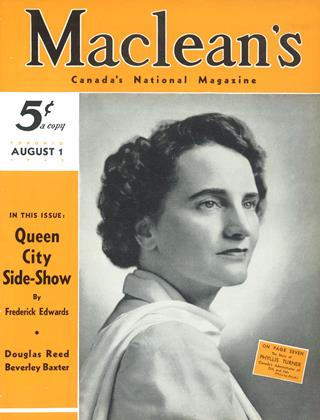