Backstage at Ottawa THE MAN WITH A NOTEBOOK September 15 1942

THE RISE of the manpower crisis— which is exactly six months old this September—was almost unnoticed by the Canadian people. No one seemed to expect that we should ever run out of manpower even when our policies of production and war participation extended far beyond any previously recognized limits of Canadian expansion.

Most people were concerned with other hopes and fears. In its pros and cons, conscription produced one of the most violent controversies in our political history, but a few weeks later many were asking what all the shouting was about.

Time and not the Government has been finding remedies for some problems and time will probably show there Will be no order in council to implement overseas conscription, for which Mr. King promised to seek a House vote of confidence in advance. The draftees, and not the Government or its critics, have looked after this. They have refused to remain in any large numbers on a purely home defense status. The problem now is not to get Canadian soldiers to go overseas but to get enough men to stay home to perform the essential tasks of munitions and food production, without glory though with better pay.

Here is a fact that needs to be shouted to the world, in the interests of Canadian war publicity, to secure a better understanding of us by our allies, and for the purpose of killing off once and for all the inferiority complex which we and our visitors are always discovering among ourselves. It is a fact worth documenting.

The National Resources Mobilization Act has already brought far more men into the armed services in this war than did the Military Service Act of the last war. The number of conscripts drafted in the last war was 124,588, according to official records. But this is subject to deductions of 24,993 men granted compassionate leave without pay by order in council and about 6,000 men on harvest leave when the armistice wras signed. None of these actually served in the C.E.F.

EXPECTATIONS, that the Government will shortly pass an order in council to make these men available for overseas service can be based only on the belief that they have remained on their original draft status. Nothing is further from the truth. First of

all, thousands of men enlist just before or shortly after they receive a draft call. Officials estimated this group at 50,000 last midsummer, and an estimate of 100,000 is not too low now. Many of them went into the Air Force or Navy in preference to the Army.

In Parliament in November, 1941, Mr. Ralston disclosed that out of 25,903 draftees then in uniform, 8,296 had gone active. He said he had believed about twenty-five per cent had changed to active status, though his figures showed thirty-five per cent. By December, after 32,779 draftees had been called, only 6,980 remained on draftee status. These official figures showed that the rate of enlistment for active service among trainees was nearly eighty per cent. Finally, in August, 1942, although nearly 175,000 men had been drafted, only 30,000 remained with their original attestation covering only service in Canada.

These figures reveal why an order in council placing draftees on overseas service basis is • not likely to become a military necessity, certainly not in the immediate future. Another fact supports this. By the end of September the active Army will muster strength of around 400,000 men, not including draftees enrolled solely for home defense. When the Army stopped reporting the number of men on duty outside Canada early in 1942, the last official figure given was “more than 125,000.” It has certainly risen since then, but still does not comprise half the available manpower ready and anxious for an ocean voyage to a fighting front. The Canadian Army could double its strength overseas without asking the Government to alter the status of a single draftee. A military crisis would probably bring a large proportion of the remaining draftees out voluntarily, and there are still 130,000 reservists on the rolls.

For the time being, at least, the conscription crisis appears to be over.

AFAR more critical manpower problem than that of conscription faces the Army. Those who scoffed at the Government’s efforts to work out a comprehensive appraisal

of manpower resources, fearing it as a dodge to sidetrack conscription, have been sobered by news piling up of lowered production in base metal mines, irreplaceable losses of manpower in steel, coal mining, lumbering. The whole range of primary industry, upon which the munitions programs depend, has plainly been threatened by manpower shortages.

September marks the first six months of National Selective Service. On March 23 last Elliott M. Little was appointed Director. His reputation and stature have grown steadily. He has built up, on the foundations of the Unemployment Insurance Commission’s employment service offices, national machinery for manpower control. The labor permit system, so new and strange in a land of free opportunity, started when a long list of restricted occupations were denied to men eligible for military service. Now no one may change his job without registering with Selective Service.

But at this writing the problem of maintaining a proper balance between the armed services on the one hand and the munitions and foodproducing industries on another still remains to be solved. The Department of National Defense and the Department of Munitions and Supply have acted as laws unto themselves in obtaining soldiers and workers.

Mr. Howe’s munitions program has been absorbing up to 30,000 new workers a month during 1942, but his officials now believe that war-industry employment is levelling off at around 1,000,000 workers. But Mr. Howe will have to learn to say “No” when new munitions contracts arrive. Mr. Ralston, too, may have to learn to say “No” if the General Staff wants fresh divisions.

The Army has had two avenues of obtaining men: volunteer recruiting, where there has been no prohibition upon taking essential skills out of war and civilian production, and the draft, where there has been a rule-ofthumb system for granting postponements. During July, August and September the Army has been drafting 60,000 men and enlisting at least 10,000 more a month. The midsummer drain of 100,000 men from the national manpower pool is the direct cause of the crisis between the armed forces and war industry.

Agriculture won its first, and what appears likely to be its only concession, early in the fray. Mr. Gardiner got an order “freezing” essential farm labor last March. He has wisely been telling the farmers ever since that they must get along with what labor they have, and the soft muscles of townsfolk are hardening in the harvest fields this fall. Agriculture will get by this year even though Canada’s crops shatter all previous records in volume and national value.

Nevertheless the King Government is like a juggler attempting to keep five balls in the air at the same time. They are the armed forces, the munitions industries, agriculture, civilian services, and government services. Few people are clamoring

for more dictatorial orders. No one sees a simple solution. The elimination of unessential work is proceeding, but none too soon. Next task is j to solve the problem of priority ; among all forms of war and essential service.

NEITHER in Ottawa nor elsewhere in the country have Canadians been talking much about a second front, but everyone knows what the Canadian Army Overseas is for. It is no longer merely a force to defend the British Isles. A great transformation has been proceeding within the Army, with younger officers being promoted. Yet no one knows the day of action. The Chief of General Staff, General Stuart, the Adjutant General, General Letson, the Minister of National Defense for Air, Mr. Power, have been in England. At home the decision that will send the C.A.O. into action lies exclusively with seven men, the j members of the Cabinet war comj mittee—King, Ralston, Howe, Ilsley, j Power, Macdonald and St. Laurent.

SO MANY “Help Wanted” signs now adorn the national scene that the bottleneck in seasoned diplomats has escaped notice. Canada’s fast-growing foreign service needs more envoys, and staffs to send with them, than at any time since the Department of External Affairs was first conceived in 1907. In 1939 Canada had legations in Washington, Paris, Tokyo, and Hon. Jean Desy did double duty in Brussels and The Hague. Ottawa’s diplomatic colony was small, easily accommodated in the social and official swim of the Canadian capital.

Instead of five foreign legations in Ottawa, there are now thirteen, the latest being the Soviet Russian : legation. Canadian ministers to | Moscow and Chungking will serve as the main contact with allied Governj ments and peoples in those capitals. ; The problem of picking the right men has been quietly agitating Ottawa circles for weeks. Should Canada send career diplomats, trained in the Department of External Affairs? : Or should we send captains of business and industry, retired soldiers or j politicians? The problems of diplo; macy virtually compel the selection of career men—except that the manpower shortage extends even to this ! field.

If you have received notice that your subscription period is nearly completed, this is to remind you of the necessity of sending in your renewal order at once.

With literally thousands of new buyers and new subscribers for Maclean’s every month, even our constantly-increased press-run seldom leaves us with any copies for subscribers who have neglected to renew.

To make certain of the continued receipt of your favorite Maclean’s, your renewal order should be mailed to us promptly when you receive the “expiration” notice.

The date when your subscription expires is shown on the last line of the address label on your magazine. 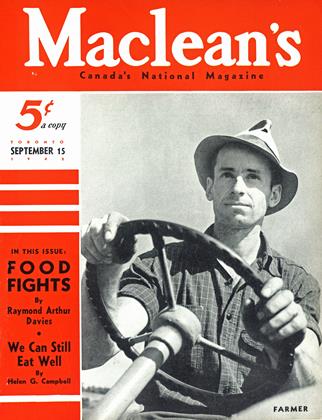